Written and Directed by Steve Cosson
Produced by The Civilians, in collaboration with Jessica Mitrani 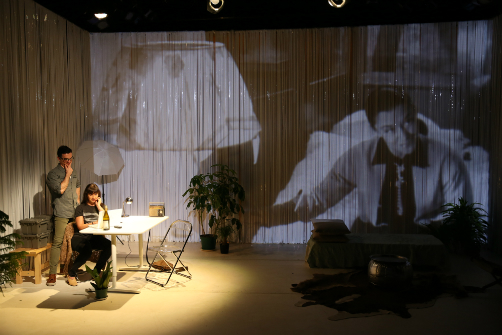 Dan Domingues and Aysan Celik in The Undertaking. Photo by Carol Rosegg.

BOTTOM LINE: An intimate Socratic dialogue about death, through which The Civilians' Steve Cosson journeys to the underworld with the guidance of a psychopomp.

Jordan: Of all the plays we could've chosen to review as a dialogue, The Undertaking must be among the most fitting, no?

Ran: That’s right. As with all of The Civilians' pieces, The Undertaking is constructed from interviews with various people about a common theme. The play itself takes the form of a Socratic dialogue between the interviewer/creator of the show Steve Cosson (portrayed on stage by Dan Domingues) and one of the interviewees, Lydia (portrayed by Aysan Celik).

Jordan: And what are they talking about?

Ran: In short, they’re talking about death. They start off by pointing out the invisibility of death in New York City, where Steve lives. But eventually the conversation becomes an investigation of Steve’s “placid” attitude on the subject. Steve initially claims he’s not afraid of death itself, but really there’s something else going on. This play is an attempt to look underneath his “permanent disquietude.”

Jordan: So Lydia introduces to Steve the concept of a psychopomp (guide of souls), which is what she becomes for Steve—a guide through this quest of essentially understanding death.

Ran: Yes, and Lydia’s a great guide. She’s Steve's only personal friend among the interviewees, and he wanted to interview her because she had experienced ayahuasca (vine of the dead) in Brazil, which produces some psychoactive effects. We learn about that experience, but their dialogue mostly becomes a vehicle for the other testimonies Steve gathered from a variety of people who’ve encountered death in different ways. There's a woman who had a near-fatal skiing accident, a man who witnessed the deaths of two partners during the AIDS epidemic, and a cancer survivor who had undergone an experimental treatment with magic mushrooms. There's also a philosopher, a hospice nurse, an embalming school dropout, a cemetery enthusiast...

Jordan: That all sounds pretty heavy. But it’s amazing how funny and light this play can be sometimes.

Ran: Yes. Steve and Lydia have a very endearing way of talking about death, suffering, and fear.

Jordan: That’s rooted in Cosson’s writing, but I think it also hinges on the two actors, who are not only able to switch between characters seamlessly and convincingly, but also have the ability to switch tones quickly, from the intellectual, to the comic, to the intimate. These are two really strong performances.

Ran: I think it is important that they don’t use a lot of affectations, but portray these interviewees with honesty, something you can tell whenever there's a blend of Cosson’s original audio recordings and the performers' lip syncing. One of the interviewees mentions how theater is sort of a ventriloquizing of the dead. And that interested me, because in this play you see these two actors almost "possessed" by multiple characters as they channel all of their voices.

Jordan: Does that add to the experience, you think? That ventriloquizing?

Ran: For me, I was hoping to hearing more of the actual sound bites. There's an authenticity in the imperfection of those recordings that can't quite be recreated by a performer’s remembering. When those voices actually come out in the sound system it is magical.

Jordan: I liked those moments as well. But I think the way they are utilized is effective. The actors might be ventriloquizing, but to me they do it respectfully. They aren’t putting on a voice, but rather bringing the voices to life. It isn’t some kind of trick. On another note, what did you think of the multimedia elements in this show? That was another big feature.

Ran: I thought it was one of the most effective multimedia uses I’ve seen in a while. Cosson uses clips from Jean Cocteau’s Orpheus—the part where Orpheus enters the underworld through a mirror—and he also superimposes live footage over the film as the performers go through the "journey to the underworld" on stage. The live footage is also used to shift perspective after Lydia builds a pillow fort on stage for Steve (so we can see what's going on inside).

Jordan: The live footage is typically from Lydia's phone. It’s a way, she says, of turning the table on the interviewer-subject relationship.

Ran: She says it’s “important that the thing being looked at, it looks back.”

Ran: And this is very different from the stuff The Civilians usually do, which is often a cabaret-style collage of interviews. But with The Undertaking, the approach is more personal. In the beginning, I was skeptical because the show tackles the subject, death, in a very intellectual way. But my thinking changed when the play became more about Steve's own investment in the subject, his relationship with his mom (who has MS), and his real fear of being left behind.

Jordan: The intellectual elements are often quite satisfying though. There’s a lot of interesting musings about death. There is some stuff about the embalming process I probably wish I didn’t know. And I loved the bit about how many New York City parks are former mass graves.

Ran: I was also really touched by the bit where Steve mentioned that his high school friend who shot herself is still alive in his mind, back home.

Jordan: There are so many little lovely moments like that. The play gives you so much to mull over. No wonder you wanted to see it a second time.

Ran: Yes. I first saw it in September 2016 (you can read the previous review here).

Jordan: How does this production compare?

Ran: It’s exactly as I remembered: same production, same team, except a different actress plays Lydia now. And 59E59's Theater B is smaller than BAM's Fishman, so that adds more intimacy, and there's an even more seamless flow. I never realized how much this play had stayed with me and influenced my own work until now.

Jordan: I think I’ll have a similar experience as I continue to think about this.

The Undertaking is written and directed by Steve Cosson. Produced by The Civilians in collaboration with Jessica Mitrani. Set and Costume Design by Marsha Ginsberg. Lighting Design by Thomas Dunn. Sound Design is by Mikhail Fiksel. Projection Design by Tal Yarden. Stage Manager is Geoff Boronda.

The cast is Dan Domingues and Aysan Celik.