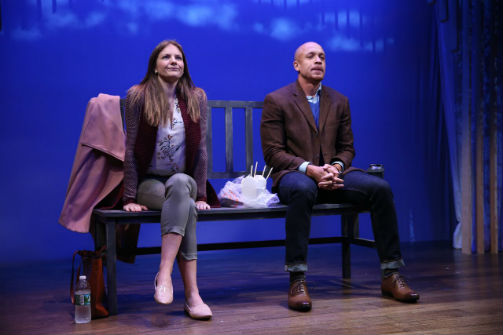 BOTTOM LINE: The latest offering from the annual Summer Shorts festival serves up well-crafted drama and laugh-inducing comedy from actors adept at their craft.

The Plot by Claire Zajdel, directed by James Rees

The first play performed in the trio of Series B's short plays (the order alternates) focuses on a brother and sister meeting their mother at a graveyard in the early hours of the morning. Frankie (Molly Groome) and  Tyler (Jake Robinson) both stomp among the graves and banter as they wait for their mother to appear and explain to them just what they are doing in such an unexpected place. Frankie is a high strung type-A, a first year associate at a major law firm who has also just become engaged to a very wealthy man. Her concerns center around making it to work on time for her morning meeting and marrying who she considers the perfect man. Tyler, meanwhile, doesn't quite have everything together and works as a freelance coder.

Eventually, their mother calls them and reveals that she isn't coming after all and directs them to a specific plot number (hence the title). There they find that their mother has purchased a plot and a headstone for herself that she has already had engraved. The two are both daunted by having to face their own mother's mortality so suddenly. To make things worse, it is soon revealed that their mother has also purchased both plots on either side of her for the two siblings, forcing them to also confront their feelings about their own deaths, despite both still being in their twenties. The strength of this piece lies in the banter the two exchange as they discuss their complex relationships to their mother and to each other. In its brevity, the work features well-crafted dialogue from playwright Claire Zajdel and strong performances from the two actors.

While the other two plays in this series have relatively simplistic premises, Ibis is quite complex and intricate with multiple scene changes. The play focuses on Tyrone (Deandre Savon), a 27-year-old African American man attempting to track down his father, who abandoned the family 20 years ago without a trace. While rumors circulate regarding his father's fate, and Tyrone himself imagines him owning a jazz club far away in Paris, he hires a private detective to track down his father's true whereabouts. The detective he hires is a woman who goes by the moniker Sam Spade (Lindsey Broad). He meets her in a standard film noir scene with dark shadows and light filtered through blinds. The two have an amusing exchange in which they discuss movie detectives and reference the plots of such classic flicks as Double Indemnity.

The cast of Ibis skillfully navigates the characters' emotional turns and changes of heart. Television regular Lindsey Broad (The Office) is particularly enjoyable to watch as the mysterious detective, whose character is far more vague than the other more complex characters (her dark past is explained simply through retellings of "Little Red Riding Hood"). Overall, this piece has a lot of compelling elements, and Lane creates a unique vision. However, it doesn't feel fully fleshed out, as if excerpted from what would surely be a promising full-length play.

In this series the best was truly saved for last, with Sparring Partner, written by Summer Shorts regular Neil LaBute and directed by J.J. Kandel (the festival's Artistic Director) ending the night. The play opens with a boss and his employee (identified simply as Man and Woman) having lunch on a park bench while they play "Hollywood Names" and try to stump each other with actor pairings. The fact that their relationship may be a bit more than platonic is revealed when the woman (played by Joanna Christie) comments that it is sexy when the man refers to himself as being the boss. Actors Joanna Christie and KeiLyn Durrel Jones both do an impressive job of conveying the physicality and subtext of an unfulfilled sexual tension, giving significance to small clues building up through LaBute's script.