Sugar in Our Wounds 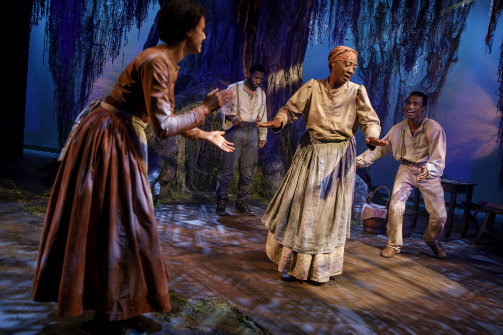 BOTTOM LINE: A gay Black love story set in 1862, Sugar in Our Wounds is the first in a promising trilogy that covers different eras of American history.

It is the summer of 1862 on a cotton plantation in the American South. The plantation's slaves live in a small cottage—there is James (Sheldon Best), young Mattie (Tiffany Rachelle Stewart), and Aunt Mama (Stephanie Berry), a wise, old woman who is neither aunt or mother, but who has great spiritual and historical knowledge. Aunt Mama and James often walk by a tall tree that, they suppose, reaches to Heaven; James can even hear the tree speak. Yet this is also the tree from which the other male slaves in the area, when suspected of resisting authority, have been hanged. When Henry (Chinaza Uche), a new slave, arrives, the others quickly notice his lack of respect for the local white people. Although Henry plans to run away to find his family, Aunt Mama persuades him this is too dangerous.

While James and Henry relax one Sabbath, they try to climb the tall tree—perhaps in Heaven they will learn why they are being oppressed on Earth. Henry hurts himself, James cleans his wound, and soon they are kissing. The perceptive Aunt Mama sees how happy James has become, and tells him that in Africa, where people know we are spirits merely inhabiting less important bodies, all kinds of love are accepted. Nevertheless, she urges James to be careful in the South, where he could be punished.

Meanwhile, there is also the jealous Miss Isabel (Fern Cozine), who is responsible for kicking young Mattie out of the "big house" to work in the fields. Eventually Isabel, a deeply lonely person, tries to make Henry love her. But when Henry pushes her away and she then threatens to have him hanged, he knows he must run. Several weeks later, Henry returns under cover of darkness to find many things changed for the worse.

James and Henry's true love contrasts with Miss Isabel's empty marriage, absent husband and a regime propped up by spurious biblical verses, lynchings, and a war. Through this story of adversity, the ensemble brings the audience much laughter and hope. Dede Ayite's costumes throw the sincerity or pretentiousness of the characters into sharp relief. And Saheem Ali's direction is top-notch, taking into account the many layers of coded speech and meanings among oppressed people. Every line and facial expression produces immediate reactions.

The giant, age-old tree dominates Arnulfo Maldonado's set. Like the pouch full of African dirt that Aunt Mama has inherited, the tree is a through-line to the earth, history, and the divine. Jason Lyons's lighting helps make our time with the tree feel sacred. Indeed, this sense of spirituality is a profound element in Sugar in Our Wounds. Keeping with the characters' stated mission of turning their dejected state into something beautiful that's all their own, Michael Thurber's original music and Darrell Grand Moultrie's movement shine through in many spiritual songs and dances. As the play ended, I was already excited to see the rest of the trilogy (the other two are Fireflies and In the Middle). Even if love is followed by loss, they are both worth having.