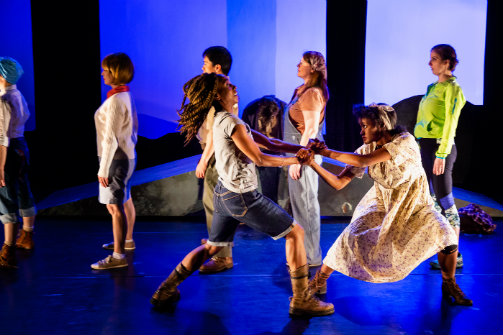 BOTTOM LINE: An ambitious, if episodic, look at the role of a 1930s jobs program for women, She-She-She attempts to weave contemporary concerns into an historical frame.

During the height of the Great Depression, President Roosevelt created the Civilian Conservation Corps, or CCC, as part of the Works Progress Administration (WPA). Its goal was to train young men in forestry, flood control, and community beautification. But FDR's wife Eleanor wanted WPA programs to serve women as well as men. Aided by luminaries including theologian-civil rights activist-lawyer Pauli Murray (one of Yale's newest colleges was recently named after her), Eleanor Roosevelt pushed for projects that would provide expanded educational and economic opportunities for women. By 1936, 90 camps—dubbed the She-She-She in contrast to the CCC—had been established; all told, they served 8500 women before being dismantled in the latter part of the decade.

Three male Park Rangers (Chad Lindsey, Javan Nelson, and Jeremy Rafal) also enter the mix as stories unwind, collide, and run along seemingly parallel tracks despite the many-decade variations in time and situation. Director Chad Lindsey's modest scene changes are quick, orchestrated by the actors with little fanfare. What's more, back screen illuminations (lighting is by Alejandro Fajardo) seamlessly shift the scene from sunrise, to mid-day, to sunset. There’s even a bit of song and dance—all of it presented with skill and verve.

But although She-She-She is audacious and conceptually fascinating, the narratives are disjointed, and the stories from Camp Tera are far more engaging than their modern counterparts. For example, before arriving at Camp Tera, Rivka had given birth and then put the child up for adoption. Although still grieving, when Rivka learns that the unmarried Cornelia is pregnant, and thus at risk of losing her position, Rivka conspires with Maureen to alter Cornelia’s paperwork. It’s a wonderful show of sisterhood, solidarity, and spunk.

Conversely, the modern women face a panoply of highly individual concerns—about whether or not to pursue chemotherapy treatments, pursue a career in academia or the private sector, and follow the expected path in mourning the sudden death of a young spouse. Of course these can be intense conundrums, and each woman has come to Bear Mountain to figure out how best to proceed. Still, something is off about these modern scenes. The story of the She-She-She camps is enough in itself to provoke great drama.

In fact, it is particularly important in this political moment to remember that the U.S. government once cared enough about its people to train, educate, and employ them. Yes, this was over eighty years ago, but still—a play like She-She-She reminds us of what’s possible and can inspire us to agitate and organize for a better, more humane, world. That the play ultimately does not fully live up to this potential is a shame, but it leaves the door open for more writing about this transformative, albeit short-lived, economic justice project. As a model of government for the common good, the New Deal suggests a possible antidote to Trump and his minions. That alone makes She-She-She worthwhile.

(She-She-She plays at the Actors Fund Arts Center, 160 Schermerhorn Street in Brooklyn through June 2, 2018. The running time is 95 minutes. Performances are Wednesdays through Saturdays at 7:30. There is an additional performance Fri 6/1 at 2, and no performance Sat 5/26. Tickets are $25, $15 for students and seniors. For tickets and more information, visit hookandeyetheater.com or call 347-927-6475.)