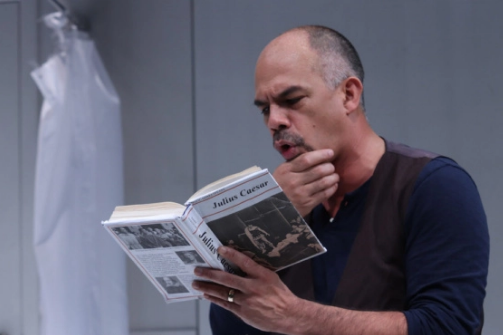 BOTTOM LINE: This simultaneously epic and intimate solo performance is a love letter to a father through the lens of a boy's understanding of Julius Caesar.

Going into the show, I figure it’s going to be similar to An Iliad (Lisa Peterson and Denis O’Hare’s 2012 creation that still haunts me to this day), except this time the storyteller would bring us a unique, concentrated take on Shakespeare's Julius Caesar, with Asian flavors. How wrong I was, and how pleasantly surprised to realize that Pabotoy’s Sesar is in fact deeply personal.

Set entirely inside of a bathroom, and using almost only props that can be found there, the play tracks a fourteen-year-old boy’s accidental encounter with Shakespeare’s play. He's fascinated with its text and characters, and it connects him to his father, whose political and life journeys parallel those of the Roman emperor. Pabotoy, a versatile performer and debut playwright, embodies the Filipino teen who locks himself in the family bathroom to practice each speech from the play, and to try and decipher just why this remote tragedy speaks to him in such serendipitous ways. Pabotoy also plays the boy’s father, a former politician now in exile because of his democratic beliefs, who discovers his son’s secret lair, joins in this literary odyssey, and ultimately uses his own life experiences to teach his son the essence of the play.

For those who are familiar with Julius Caesar, this is a production that would challenge your perspective on the famous tragedy, as well as expand it. And those who haven’t necessarily read the play will still be able to understand the power dynamics between those distant characters, and learn to listen to those words of mystery through an accessible lens, just as the protagonist does. The most satisfying part of this production is indeed not how much of the Julius Caesar story it’s able to retell within the context of a bathroom, but how little it needs to, in order for you to understand the narrative thread of the show, which is really an exquisite portrait of a father and son relationship.

Apart from Pabotoy's excellent performance, the show's simple yet effective lighting, designed by Oliver Wason, is intrinsic to its success. It effectively pulls us out of the environment of the bathroom, and creates a larger world that envelops both the ancient and the present, both a family’s past in the South Asian sea and their current life in the United States. In one particular moment, Pabotoy lights himself solely with a hand-held flashlight in the otherwise dark space. Every time he’s illuminated, the performer’s physicality and voice transforms completely, and as if by magic, he becomes two people simultaneously: the father and the son, the teacher and the student.

There is so much tenderness in this very funny solo tour-de-force performance; it’s one of the best solo shows I’ve seen by a long shot. Most importantly, it allows the words to tell the story without a lot of distractions, for which director Feldman deserves much credit. The projections (by Dan Scully), as well as the rest of the design elements, effectively contextualize the performance, rather than overpowering it. Whether you’re a fan of plays that are family-themed and earnestly sincere, shows that are intellectually stimulating, or unique takes on classical texts, Sesar will speak to you.

(Sesar played at Theater Row, 402 West 42nd Street, through November 1, 2018. The running time was 65 minutes with no intermission. For more information visit ma-yitheatre.org.)