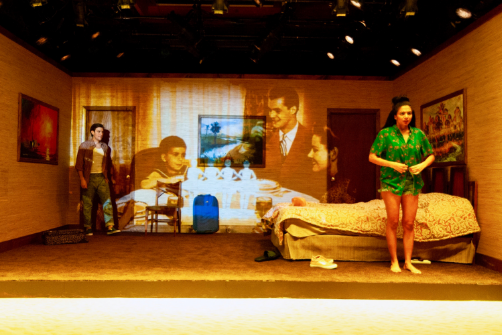 BOTTOM LINE: A strange show about a drug dealer and his addicted wife who move to "paradise" and keep a seal-woman hostage while attempting to live in some semblance of normalcy.

The lively audience at Friday night's performance of Selkie must have known what was coming. Couple Deanna (Toni Ann DeNoble) and Keaton (Federico Rodriguez) have left Arizona and now find themselves living near the beach at an unspecified popular tourist spot outside of the United States. With an image of hills, trees, rocks, water, and a beach displayed across the curtain and proscenium, it looks like paradise, but we soon learn that they are still the same dysfunctional people here that they were prior to arriving.

When we are first introduced to Deanna and Keaton, all seems hunky dory. They are chanting “body shots,” Deanna is flashing her tits to the lamp, and they are discussing who will get which side of the bed. Why is this couple here though? What is their story? These questions are never directly answered. With all of these uncertainties the plot progresses, with Keaton attempting to find out who “runs this town” so he can create a business selling drugs to tourists. Long story short, once Deanna finds out Keaton is dealing again, she relapses into snorting cocaine. Keaton’s shady business venture leads him to turn nasty, as he tries to make a deal with the local selkies, mythological beings capable of shape-shifting from seal to human form.

Keaton steals one of the creatures' coats, therefore preventing her from changing back into a seal. Deanna and Keaton keep the selkie, called Alondra (Elia Monte-Brown), hostage and soon weave her into their daily lives. The show progressively turns darker and darker as Keaton attempts to control both his wife and his prisoner. The cast impresses: DeNoble shows off dynamic dance moves, Rodriguez oozes Jim Carrey-type charm, and Monte-Brown is endearingly innocent yet wise, reminiscent of Leeloo from The Fifth Element.

Selkie's design team utilizes light (designed by Cecilia Durbin) and projections (by Yana Birykova) in interesting ways. With smaller shows, light design can often be overlooked; here, it's a powerful tool, including a few moments in which the theatre is pitch black, allowing us to hone in on the panic and frustration in DeNoble’s voice. In projections deployed throughout the show, images shown include teeth, ballet dancers, people at a pool, gigantic eyes, and a stereotypical '50s-era family around the dinner table. Though strange and not always obviously connected to what is happening, each is chosen deliberately, used not to cover scene changes, but layered over the actors during their scenes.

Selkie is strange, yet unique, with unspoken ideas and symbolism galore. Playwright Krista Knight explores issues of self-determination, relationship abuse, gender dynamics, loneliness and isolation. Director Matt Dickson’s vision and the cast’s character choices add yet more layers. All in all, it's been fun trying to describe this strange yet enjoyable show to my friends and family.

(Selkie plays at The Wild Project, 195 East 3rd Street, through December 22, 2018. The running time is 1 hour 20 minutes with no intermission. Performances are Tuesdays through Sundays at 8. Tickets are $25 and are available at dutchkillstheater.com or by calling 212-352-3101.)