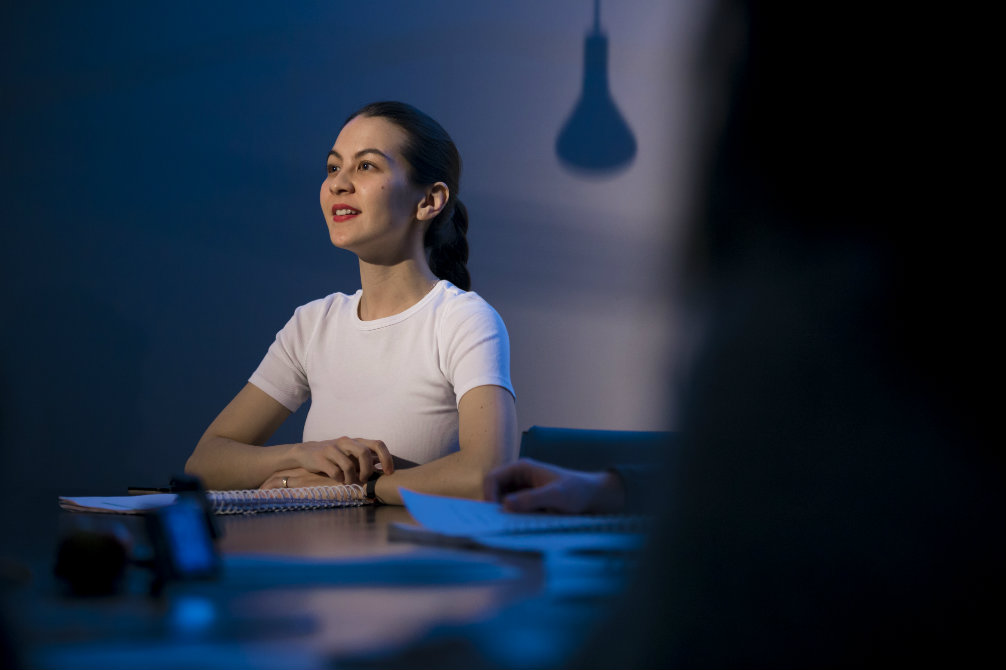 BOTTOM LINE: A solo show developed out of two found recordings, Say Something Bunny! is hands down the best theatre experience of the 2017-2018 season. Buy your tickets now.

Aside from having noticed this little, curiously titled show on several Best-of-2017 lists, I went into Say Something Bunny! cold. And since so much of this piece is about exploration and discovery, I’d recommend you do the same. So while I will do my best to tease rather than spoil, I’ll say right off that you should just buy a ticket now—any serious theatre-goer needs to see this show. Say Something Bunny! is unlike anything I’ve seen—both daringly experimental and incredibly accessible, it is one of the only times I’ve ever left a show vowing to return.

For those wary of hype, let me follow Say Something Bunny!’s lead and set up the show in the most unassuming way possible. There are only seats for twenty-five audience members at each performance. Most people sit around a circular table. There’s a single performer (Alison S. M. Kobayashi) who introduces the evening’s concept—we will be listening to two home audio recordings that she happened upon a few years back. The recordings, made on a wire recorder in the 1950s, are often hard to understand, so each person has a transcription with which they can follow along, along with a phone-sized monitor that displays the current page number. Each person is also assigned a role—they will “be” one of the people on the recording. (Have no fear, there is no actual audience participation required). And that’s pretty much it.

Well, not really. Periodically, Kobayashi pauses the recording to explain what is, or might be, going on. Or to provide contextual information about cultural references. Or to provide visual illustrations of certain elements. Or to do any number of other things. As in most good theatre, the pauses in Say Something Bunny! are really where the action is. They function here as a kind of live hyperlinking, in which we get annotated notes, visual references, and song clips, along with Kobayashi’s own interpretations of the events, both via photos of herself in costume, as well as moments of live performance. The sound and lighting design here is perfection, with some of the most precise cues I’ve ever seen. If it seems like listening to over two hours of an amateur home audio recording will be a slog, Kobayashi’s ever-varying interventions make the time fly by.

Anyone who has ever seen a home movie will instantly recognize the mundane nature of this recording. We are hearing normal people at a normal neighborhood party talking about normal things. But of course, were this truly “normal,” it could easily become a snooze-fest. What is so incredible is how Kobayashi, along with co-writer Christopher Allen, teases out the layers of information present in everyday conversation, conversation that would normally be written off as meaningless. One of the most striking themes is just how much popular culture pervades these recordings (fans of musical theatre will be especially pleased), reminding us just how much it is enmeshed in our everyday lives, often in ways we don’t even realize. Say Something Bunny! thus reminds us just how much we can learn from, and just how much dramatic potential exists in, the normalcy of everyday life.

Say Something Bunny! is also a big fat carrot for anyone interested in dramaturgy and the process of theatre-making. Kobayashi and Allen have crafted this performance as a kind of heightened first table-read/dramaturgical presentation, were this script to be turned into an actual play. Graphic inserts are labeled “Notes to Prop Dept.,” many of the asides delve into aspects of script analysis, and Kobayashi periodically suggests possible character motivations to whomever is “playing” a certain role. Yet this whole audience-as-silent-actor thing is hardly a gimmick; rather, it serves as a subtle yet crucial way for Kobayashi, and us, to ground each character. It’s quite clear that having a live person for Kobayashi to react to is what enables her to help make these unseen voices come alive for us. Say Something Bunny! is definitely a group effort, and all the more wonderful because of it.

But if “go see this amazing play about dramaturgy” may not be a huge selling point for everyone, Say Something Bunny! is also, at its core, one of the most enjoyable mysteries I’ve encountered in a very long time. Remember, these recordings came with no label or identifying information. And wire recordings from the 1950s don’t have metadata. So how does Kobayashi figure out who these people are? Or where and when these recordings were made? Or what was going on in the background? More than just providing answers (and as is eventually made clear, the accuracy of information isn’t really the point here), Kobayashi cleverly takes us along her own process of discovery—just hearing about how she figured out the precise dates of these recordings is worth the price of admission. To this end, at the beginning of the play we don’t know who is a lead or supporting or minor character, since when she first heard these recordings, Kobayashi didn’t either. And she encourages us not to flip ahead, thus my refusal to provide any specific information about these people and their lives. But fear not—the amount you learn by the end of the evening is astounding.

While I can’t say enough about Say Something Bunny!, it’s really a show one needs to experience to understand. It’s been running since 2017, and with only 25 seats per show, literally every performance sells out. So seriously—get your tickets now.

(Say Something Bunny! plays at UNDO Project Space, 511 West 20th Street, through July 27, 2019. Running time is 2 hours 10 minutes with one intermission. Performances are Thursdays through Saturdays at 7:30; Sundays at 2. Tickets are $49. Discount student tickets are available. For tickets and more information, visit saysomethingbunny.com.)