Written and Performed by Aasif Mandvi; Directed by Kimberly Senior
Produced by Audible 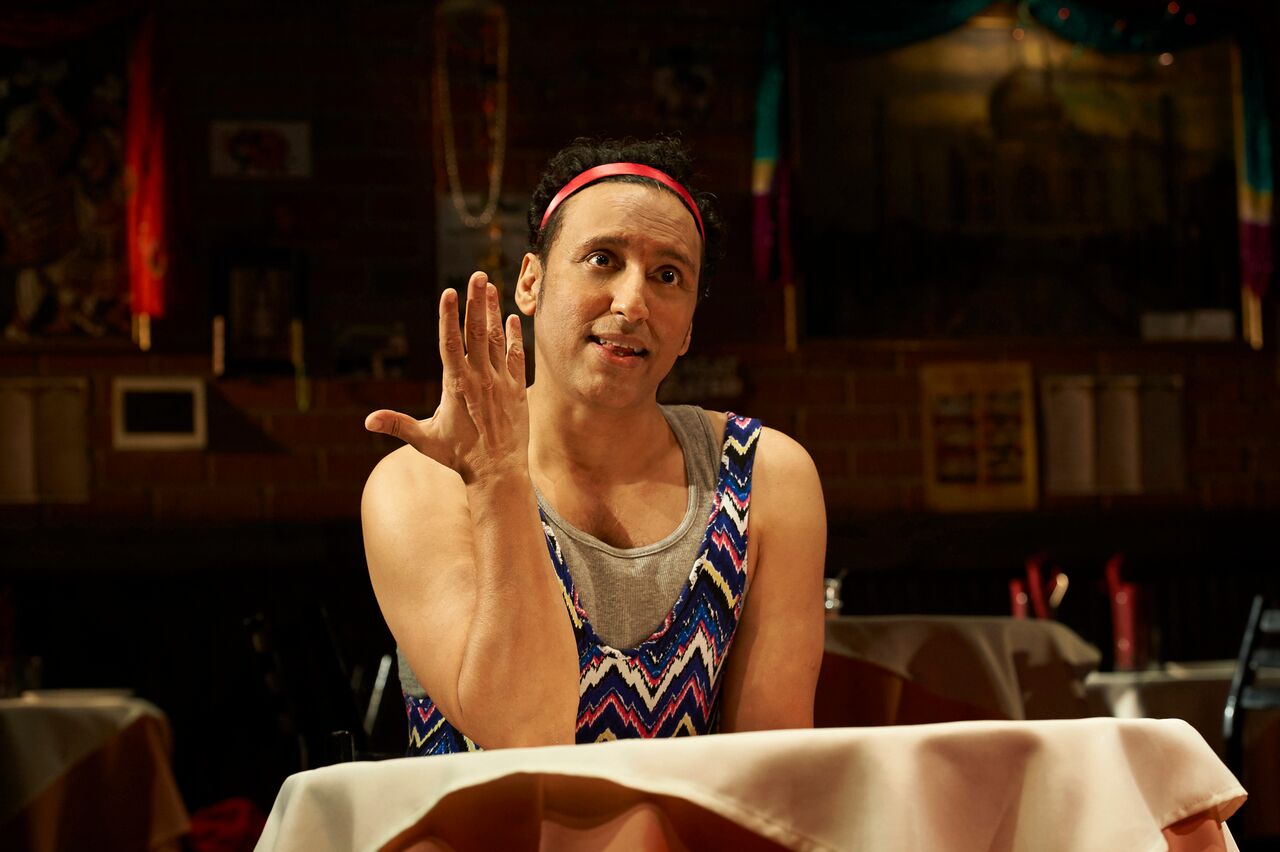 The Mumbai-born performer is likely best known for his years in the satirical trenches of The Daily Show with Jon Stewart. However, before appearing on Comedy Central as the “Chief Brown Correspondent,” Aasif Mandvi shared his version of the American immigrant experience as told through the eyes of a recent émigré and the members of the family in whose Indian restaurant he works.

Although the political landscape has radically changed since Clinton was President, the classic immigrant story (at least in the pre-9/11 era in which the action is set) is largely unaltered, going back over a century to Ellis Island. Like millions before, Azgi (one of six characters portrayed by Mandvi), is about to leave home for the first time. Suitcase in hand, he walks down the aisle, inviting the audience to join him on the journey to the unknown. He’s preparing to leave India after receiving a letter from friends already established in New York, offering him a job and a place to live. Azgi is funny, charming and eager to discover whatever awaits him.

He quickly learns how to get on in the fast-paced atmosphere of the titular East Village restaurant run by Hakim and his wife Farrida, realizing that if he simply “nods, smiles and says ‘yes, yes, yes you are absolutely right,’ people love you!” Putting on a bright blue scarf, Mandvi becomes Farrida, a woman who mourns the girl she was back in India, one who loved to dance and sacrificed so much for her new life. Pointedly she tells Azgi “America can give you nothing that you don’t already have.”

Hakim, sporting aviator glasses and a tie, also wrestles with the cost of success as he fights to hold onto his culture, language and identity in the new country. Meanwhile, his children are more Americanized with each passing day. His daughter Sakina has been pledged since she was 11 to Ali, an Indian pre-med student and seemingly devout Muslim. But she just wants to be in a band with her friends, go to dances, and make out with her non-Indian ex-boyfriend. And her younger brother Samir lives for Disney World, his Game Boy, and his light-up Teenage Mutant Ninja Turtles tennis shoes.

Although there are a few instances where it isn’t immediately apparent which character he has suddenly transformed into, Mandvi handles the transitions deftly, with the aid of lighting cues and a few sartorial props. Yet some characters feel more lived-in than others; Mandvi is very affecting as the adults, but the children don’t feel as developed.

In Mandvi’s skilled hands, Sakina's Restaurant humanizes not only the faceless immigrants who inhabit this city, but also the triumphs and challenges they encounter as a result of assimilation, their disconnect from their homeland, and their struggles to create more economic opportunity. Sakina's Restaurant, while not overtly political, nonetheless serves as a welcome antidote to the anti-immigrant vitriol coming out of the White House and cropping up across the country and internationally.

(Sakina's Restaurant plays at the Minetta Lane Theatre, 18 Minetta Lane, through November 11, 2018. The running time is 80 minutes with no intermission. Performances are Tuesdays through Fridays at 8; Saturdays at 2 and 8; and Sundays at 3. Tickets are $57 - $117 and are available at ticketmaster.com or by calling 800-982-2787. For more information visit sakinasrestaurantplay.com.)