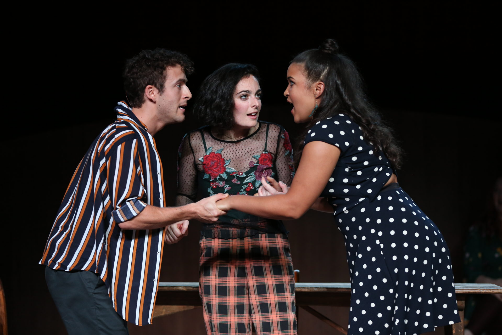 “Great poems are never made up,” Edna St. Vincent Millay explains, early on in Renascence, the heftily ambitious new musical about the poet’s life now playing at the Abrons Arts Center. “They are unearthed.” Great musicals, though, may be a little more complex to assemble. And while composer Carmel Dean’s settings of Millay’s poems, which make up the entirety of the score of this new work, are sometimes enchanting, Renascence doesn’t demonstrate that there’s a great musical to be found in the early career of this future Pulitzer Prize-winning poet (played with fiendish resolve and astonishing high belt by Hannah Corneau).

Most of the musical focuses on Millay’s writing of “Renascence,” a poem that infamously lost the contest for which it was written but earned its author lasting fame when even the winners declared that it should have taken the prize. We also see the contrast between Millay’s humble but loving upbringing by her mother (the warm, strong-voiced Katie Thompson) and the wider, more sensual world that beckons the poet away from home.

Dean’s musical settings are most electric when the poems are short and can capture a fleeting feeling—when Millay and her two sisters surge with excitement at the possibilities ahead if "Renascence" wins first prize, the crisply concise text of “Afternoon On A Hill” (“I will be the gladdest thing/Under the sun!” it begins) grabs the moment perfectly, helped out by Dean’s powerful vocal arrangements. For the most part, though, Millay, for all her authorial clarity and beauty, was not crisply concise, and most of the poems included here feel only tangentially related to what’s happening onstage. Rather than opening up the possibilities for exploring Millay’s biography, her poems often seem to get in the way of telling the story. Since no one in Renascence can sing any words that Millay didn’t write, Dean often adds stretches of emotive oohs and ahhs into the poetry, as if attempting to inject the moment with a yearning or grief or elation that the text doesn’t happen to provide. Millay’s usually strict meter also means that Dean has to choose between writing music with scant rhythmic variation or going her own way, leaving Millay’s metrical compactness behind.

And because Renascence is trying to be two very different things at once—a dramatic retelling of Millay’s early career and a song cycle of her greatest hits—characters often end up trapped ten stanzas deep, singing lovely words that have too little to do with the story being told (other than, of course, the fact that Millay wrote them). And stuck between a work driven by character and story, and one driven purely by the Millay oeuvre, Renascence becomes a sort of biographical jukebox musical, a turn-of-the-century, lyric poet Jersey Boys.

Dick Scanlan’s book hews closely to the facts of Millay’s early life: it’s most effective in the ample quoting from excerpts of Millay’s letters that capture her verve, nerve, and restless thoughtfulness better than the settings of her poems usually can. Scanlan stumbles, though, in mixing this livelier epistolary storytelling with a confusingly inconsistent concept for the remainder of the show: characters move rapidly between third-person narration and quasi-realistic dialogue in which people who are absent from the scene literally pop up from beside the stage to insert themselves into the conversation for a line or two. An opening sequence in which the six performers work together to write the first stanza of Millay’s epic poem feels tonally disjoint from what follows, and so does the opening of the second act, in which audience members are selected to read aloud increasingly foul-mouthed diatribes against the poet whose work beat out “Renascence” for first place.

Led by Corneau, however, the cast sings superbly. There’s especially sumptuous musicality from the rising star Mikaela Bennett (she sang Maria in West Side Story at the BBC Proms in August), first as Millay’s sister Norma and then as Elaine, the Vassar girl for whom Millay falls hard. Thompson and Donald Webber, Jr. (as Millay’s absent father) also offer a moving take on Millay’s “Recuerdo,” which Dean’s music lends a gentle lonely wistfulness.

The score’s greatest asset may be the legendary Michael Starobin’s vibrant orchestrations, which make the eight musicians in the pit sound like a full orchestra and which wash Dean’s melodies with diverse colors. Visually, there’s also some lovely shadow play that uses the full height of the theatre space from lighting designer Jen Schriever.

Just like any jukebox musical worth its salt, Renascence concludes with an extended performance of the artist-in-question’s work entirely separate from the story being told (think the Mamma Mia! megamix). In this case, following an admittedly delightful twist in Brett J. Banakis’ set, the audience receives an invitation to join the cast physically “inside our poem” onstage. The singing of the 214-line title poem makes for an excessive finale, as the cast repetitively clasp hands and run up and down the stage. It’s too bad, what with all that talent onstage, that this never-ending closing act makes Millay’s poetry something to slog through rather than something to explore.