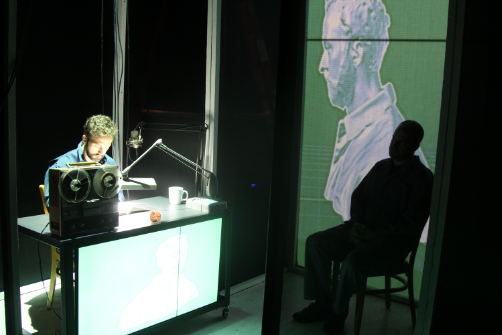 BOTTOM LINE: Theater Mitu reflects on war and death in their new stunning multimedia production based on documentary material.

“Every day millions of people die, yet we live as if death will never touch us.”

Rubén Polendo, founding artistic director of Theater Mitu, quotes the ancient Indian poem as a prologue to the director’s note in the program. With poetical delicacy that doesn’t cloud the pain of grief and loss, Remnant reminds us of the fragility of mental and physical bodies. The production is a result of interviewing people over the course of three years whose lives were shadowed by death. Testimonies of current and former members of military forces, patients diagnosed with terminal illness, and doctors and nurses become the basis of a collaborative multimedia piece playing at the company’s brand-new home, MITU580.

Remnant is an assemblage of three parts labeled A, B, and C that unfold simultaneously. As audience members enter, they sit in front of one of three “boxes” (cross-shaped rooms with walls made of mesh) and put on a headset. It doesn’t matter where you start—the narrative is nonlinear, reminiscent of Milorad Pavić’s prose with its unconventional principles of text organization. There is a multitude of narrators, the mixing of documentary and author’s material, and inter-textual allusions reaching back to antiquity.

The company members, uniformly dressed in heavy-duty coveralls, function as conductors to other people's testimonies, moving somberly inside their designated “aquariums.” Wires dangling from the ceiling connect to microphones, screens, and lights, making the three-part set look like a futuristic spaceship/lab. The sterile minimalism of the visual design is supplemented with a three-dimensional soundscape, fed through the headphones. The opening scene from Box C recreates a hospital's hustle and bustle so well that I couldn’t help but look around, thinking there were some noisy latecomers—the transition between “reality” and the “theatrical experience” is brilliant.

Softly hugging your ears, headphones not only allow for three parts of the show to unfold simultaneously, but also create an intimate form of communication. It is as though the interviewees tell you, and you only, their deeply personal stories of what if feels like to kill somebody in combat, or how it is to suffer from chronic pain while waiting for death. The fragmented narrative is interwoven with original songs, most of them written, produced, and performed by the incredibly talented musician Ada Westfall.

At the end of each cycle a cheery announcement set to carnival music instructs you where to go next. “Hurry-hurry-hurry! One minute left” rushes the voice, as if you are in a game of musical chairs. And this is after spending a full minute in silence next to the hospital bed of a dying woman. This contrasting shower of emotions disorientates, surprisingly fitting in a conversation about war and death. It also heightens the awareness, in a sense “cleansing” your emotional pallet.

Haunting personal stories from parts A and C are countered by the bizarre part B. Set up as a TV studio, this section includes an explanation of the meaning of “remnant,” retro commercials, and gloomy songs, all introduced by an overly enthusiastic narrator. The program also features the musical portrait of J. Robert Oppenheimer, an excursion into the Ancient Egyptians’ view of the afterlife, and a demonstration of the “body mic,” which amplifies memories stored in your body. The obscure and puzzling Box B, with its disharmony between the media and the message, is also the most successful one in creating a near-transcendental experience.

For a short moment, different boxes connect—via a phone conversation, or through Mahābhārata references. Otherwise, except where the sound from a neighboring box leaks into your ears, the three narratives are isolated. The architecture of this theatrical experience is flawlessly executed in both writing and production, with just the right degree of detachment allowing you to connect to the fragmented and distilled stories. Remnant allows you to levitate outside of material aspects of death, enveloped by soothing voices, divine music, and flickering screens.