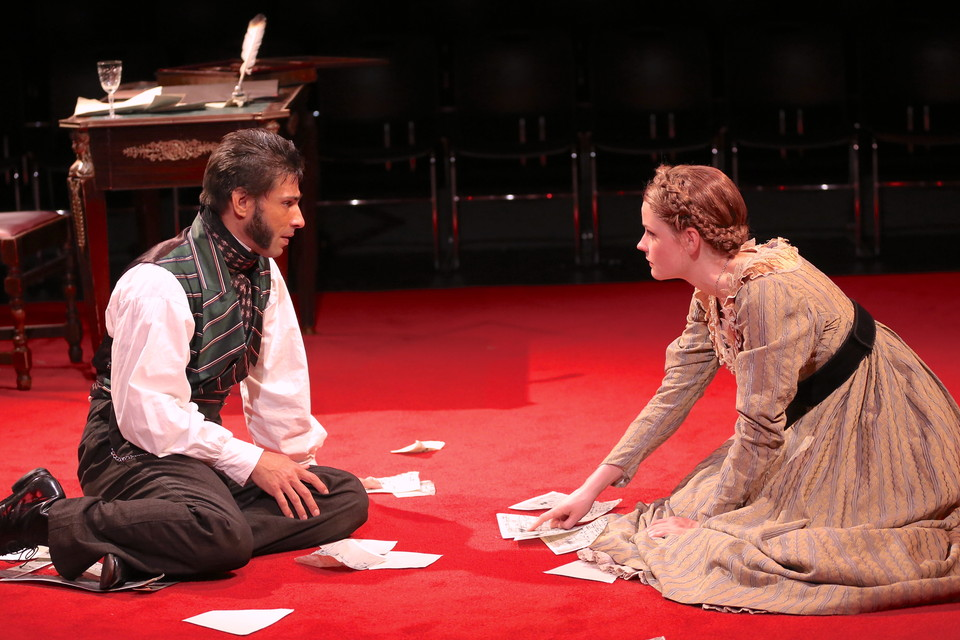 BOTTOM LINE: A verse play, Pushkin tells about the last turbulent years of the famous Russian poet in a refined production that lacks nothing but oomph.

His name was Alexander, he was the pride of the entire nation, and he was tragically shot in a duel. No, I am not talking about Alexander Hamilton, but about Alexander Pushkin, the “sun of Russian poetry” and father of modern Russian literature. No lesser a titan than his American namesake, Pushkin could easily become the center of a lush tragedy. Yet Jonathan Leaf chooses to follow a different path. His Pushkin, a verse play about the final years of the legendary 19th-century author, is a sober-minded, reserved narrative.

Sewn tightly into Elivia Bovenzi's detailed period costumes, with each piece of hair perfectly in its place (wig design by Tommy Kuzman), the actors move with grace and dignity, faithful to the period. Despite the bare minimalism of Troy Hourie's scenery dominated by scarlet carpeting, one feels truly immersed in the 19th-century society life. There, the poet Alexander Pushkin (Ian Lassiter), the Tsar’s “favorite toy,” has to submit all his writing to Nicholas I (Gene Gillette) weekly.

Not only does the monarch claim the right of the last word before Pushkin’s verses go to print, he also feels entitled to the company of the poet’s beautiful wife Natalia (played with magnificent poise by Jenny Leona) at the balls. As somebody who was brought up in the palace, Pushkin knows the moves of political dances. Yet his liberal views, and the wish to write without censorship, get him in trouble. While the entire country is eager to read each new chapter of Eugene Onegin, Pushkin secretly writes Boris Godunov, a play in which another Russian Tsar dies on stage.

Cards seem to take his mind off his troubles, but then his debt grows and his relationship with his friends at the table crack. The almost religious devotion of his sister-in-law Alexandra (Lexi Lapp) is fluttering and easy to fall for. Lapp’s embodiment of quiet Alexandra, torn between passion and family honor, is one of the play’s gems. The contrast between her open heart and her constrained movements, with her gaze locked on the floor or the pages of the books she reads, tells more about her character than any lines.

The melodic flow of Leaf’s verse creates a steady rhythm to which director Christopher McElroen tunes the staging. I overheard somebody during the intermission calling Pushkin “a play of moving chairs.” And to some extent it is: mute and nameless servants dressed in peasant attire quietly move the few pieces of furniture during transitions, giving us a chance to listen to fragments of Rachmaninoff, Prokofiev, and Glinka, among many.

The music selection is as meticulous as every element of the visual design. The actors recite verse with the ease of breathing, evoking the elegance of high-ranking Pushkin’s circles. As my companion observed, Leaf’s text, although written in modern times, leaves an impression of a classical play. With all the elements of a successful production visibly in place, something is amiss, namely the lack of charisma in Ian Lassiter's lead performance. He seems too well collected and cool for all that’s happening, as if he doesn’t truly feel anxious about the gypsy’s mortal prophecy and thinks he is James Bond.

(Pushkin plays at Sheen Center, 18 Bleecker Street, through August 25, 2018. Running time is 1 hour 45 minutes with one intermission. Performances are Wednesdays through Saturdays at 7, Sundays at 2. Tickets are $57. For tickets and more information visit sheencenter.org.)