Platonov, or A Play with No Name

Translated and Adapted by Laura Wickens from the play by Anton Chekhov;
Directed by Jessica Burr
Presented by Blessed Unrest 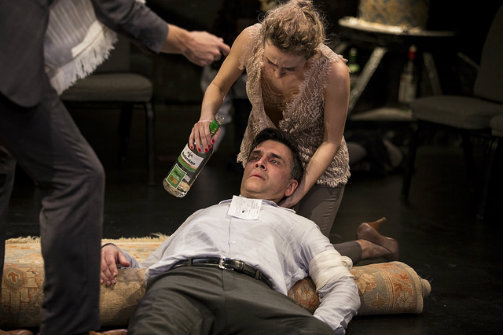 Platonov, like Chekhov’s better-known work, begins at a point of tense transition, as aristocratic characters gather amidst a backdrop of political and personal upheaval. Following the death of an esteemed military general, a group of friends and colleagues flock to his country home at the invitation of his fiery widow Anna (Irina Abraham) and adult son Sergei (Ashley N. Hildreth). Nikolai (Taylor Valentine), a provincial doctor, cheerfully milks Anna’s hospitality, slaking his ennui in her drawing room and appetites in her kitchen. Porfiry (Javon Q. Minter), an elderly neighbor, descends as a substitute patriarch, courting Anna while raining hackneyed guidance on Sergei—an arrangement the young man tolerates in hopes that Porfiry will buy the estate and save them from financial ruin. Reformed outlaw Osip (Becca Schneider) stalks the property, sublimating his passions as Anna’s odd-job man, and menacing guests with his open-carried shotgun. The return of family friend Platonov (Darrell Stokes) and Sasha (Hildreth), his devoted wife and Nikolai’s sister, further complicates this arrangement. Bored with his position and haunted by his own family’s legacy, the titular schoolmaster proceeds to act out his desires on the assembled women, including Sergei’s wife Sofya (Schneider) and Mariya (Minter), Nikolai’s young patient.

As the thrill of reunion gives way to restlessness and isolation, Platonov’s actions heighten the group’s inner and outer tensions. Appealing to their shared history, Platonov presses ex-lover Sofya to rekindle their affair and abandon her life with Sergei. Spurning Porfiry’s romantic appeals and Osip’s tortured devotion, Anna’s attempts to seduce Platonov fuel a firestorm of bitterness and rivalry. And when Mariya's outcries against Platonov’s impropriety are ignored, minimized, or caught in legal complication, she seeks revenge—a service the jealous Osip is all too happy to offer. These conflicts, paired with the property’s looming sale and surrounding characters’ inaction or outright ineptitude, send the estate and its inhabitants into a spiral so cataclysmic its conclusion seems fated.

Written over a century ago, Platonov’s social and sexual dynamics strike eerily modern chords, and this adaptation makes such parallels evident. Stokes’ Platonov is a familiar study in willful narcissism, a prominent man accustomed to feeding his urges with little regard for consequence. Though his actions mire him in self-disgust, his lack of accountability steeps them in the same conditions which breed today’s celebrity sex scandals, and the same lukewarm contrition from which their perpetrators emit public “apologies.” The play’s other male characters, from the alcoholic Nikolai to the frustrated, passive Sergei, inspire little more in terms of strength or conviction. In contrast, or perhaps response, to such rampant male weakness, Platonov’s women display remarkable fortitude, evident in Anna’s confident intellectual and erotic agency, Sofya’s resistance to temptation, and Mariya’s bold confrontation of her abusers. The show’s gender-crossed, double-cast roles highlight this distinction, upending traditional concepts of “masculine” and “feminine” behavior.

Staged in the round with just the barest border between players and audience, director Jessica Burr places us in the center of Platonov’s chaotic swirl. The actors’ quick, circuitous entrances and exits, often as characters of differing ages, statuses, or genders, amplify the play’s rampant partner switching and breakdown of established social schemas. This setup lends itself especially well to scenes of violence and intrigue, as trysts and plots unfold in the shadows around us. Anna-Alisa Belous, Teddy Jefferson, and Matt Opatrny’s set adds to the effect, its empty, ornate picture frames, peeling Rococo wallpaper, and trash-and-bottle-littered columns evoking debauchery and bygone splendor. Likewise, Miriam Nilofa Crowe’s lighting blends passion and mystery, punctuating dim night scenes with sizzling party fireworks or ominous train and gun flashes.

Blessed Unrest’s charged adaptation transforms Platonov from theatrical relic to cautionary tale, revealing the dangers of unmitigated corruption and unchecked human folly. We may scorn men like Platonov and the culture that enables them, but, it asks, are we any better? As each public scandal exposes more of the sexism, power imbalances, and complicity on which our society stands, it falls to us to subvert these lower impulses and act in accordance with the world we wish to see. If, it suggests, we are agents of our own destruction, we are just as capable of redemption.

(Platonov, or A Play with No Name plays at The New Ohio Theatre, 154 Christopher Street, through March 11, 2018. The running time is 90 minutes, no intermission. Performances are Fridays and Saturdays at 8, and Sundays at 3, with additional performances Mon 3/5 and Thu 3/8 at 7, and Sat 3/10 at 3. Tickets are $25 and are available at newohiotheatre.org or by calling 866-811-4111. For more information visit blessedunrest.org.)