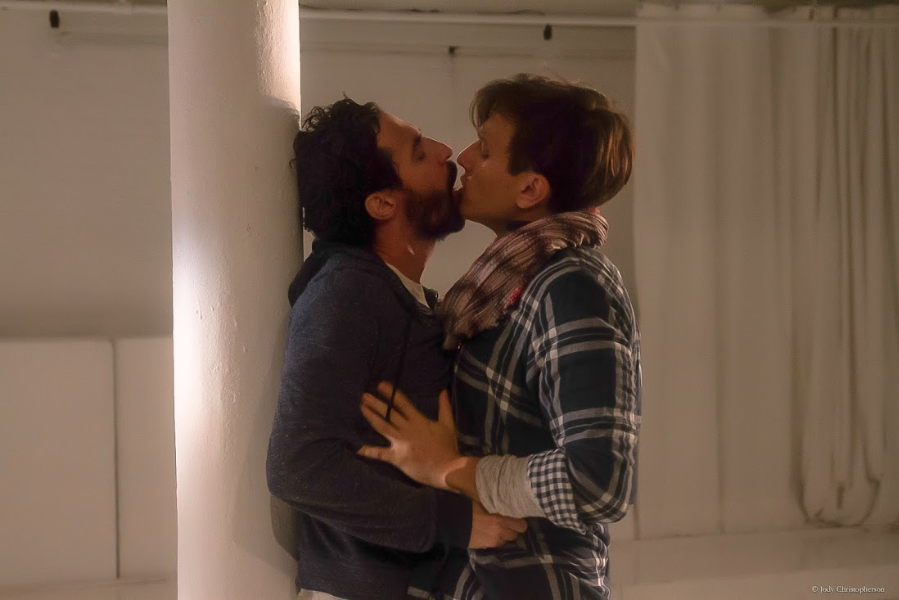 BOTTOM LINE: In this #MeToo era, Perfect Teeth shows just how messy (both physical and otherwise) gay sex can be.

Stories from the #MeToo movement often center around the different understandings that two people have about a specific interaction—what one person experiences as uneventful, or exciting, or awkward and messy, the other person experiences as uncomfortable, hurtful, or even criminal. And while #MeToo has centered primarily around heterosexual encounters, the gay world is certainly not immune to such incidents. True, gay men and women don't need to negotiate gender difference, but dating/sex rarely happens between true equals—there is almost always a power dynamic. Such is the case with Dylan (Jose Joaquin Perez) and Kyle (Maxwell Eddy), the two characters in Daniel McCoy's Perfect Teeth.

As the play opens, Dylan and Kyle meet up at a bar. Dylan, a struggling playwright, is eager and a bit nervous—perhaps because Kyle's writing success has grown immensely since they last saw each other. The falsely modest Kyle is well on his way to a promising career, whereas Dylan is…not. (Anyone who has spent any time in indie theatre will recognize these two characters, and this dynamic, immediately). There is also palpable sexual chemistry; it comes as no surprise that these two have a sexual history. Yet we eventually get to the real reason Dylan reached out—not to have Kyle read his latest script, but because he wants to confront Kyle—about raping him.

Kyle's response is textbook – he remembers that they were both a little drunk, and that Dylan wanted it “rough.” For Kyle, the encounter was completely consensual; for Dylan it was definitely not. Yet while it is tempting to take sides, McCoy's point is that there is no clear villain or obvious victim. At different moments, both versions feel believable, thanks in large part to the incredible performance of these two actors. Perez is especially memorable, with a complex intensity that communicates a bevy of conflicting emotions. Perez is so magnetic, I couldn't take my eyes off of him throughout the entire first scene. Eddy has perhaps the more difficult role as the blandly handsome rising star, yet manages to infuse Kyle with enough humanity that we have trouble hating him, however much we might want to.

As the play progresses, and the two continue to deal with Dylan's accusation and Kyle's denial, their attraction persists. It's a refreshing layer to stories like these, a reminder that desire does not always get erased when a previous experience has become labeled as abusive. McCoy's point is a ripe one for theatre—people, and their feelings, are often messy. And both actors, Perez especially, walk this challenging line—between hurt and hunger—to perfection.

David Hilder’s direction wisely focuses on the talented actors and McCoy’s taut script. Perfect Teeth is carefully staged but feels organic, not forced or contrived. Liam O’Brien’s costumes establish these two characters perfectly, and Emily Auciello’s ambient sound design contributes nicely to the establishing of locations. Lauren Helpern’s set design is, aside from a completely unnecessary rug, perfectly minimal, allowing for quick scene changes that don’t let the tension dissipate. And while I would have liked a few of the props to be functional (can’t a water bottle contain water?), these are minor complaints for an indie production.

Given that he named his characters “Dylan” and “Kyle,” I can’t help thinking that McCoy probably didn’t write Perfect Teeth specifically for an interracial couple. If that’s true, then Judy Bowman’s excellent casting, no doubt coupled with Hilder’s direction, is even more responsible for so much of the unspoken friction at work here. And this casting makes sense for a script haunted, perhaps unintentionally, by whiteness—after all, isn’t that what makes teeth perfect? By the penultimate scene, where Dylan is now facing consequences Kyle literally cannot conceive of, we truly begin to see just how far the cards have been stacked against Dylan from the start. Although white privilege is never mentioned, it oozes out of every line Kyle speaks here. And as is so often the case, Kyle has absolutely no idea how fortunate he is. What’s even more striking, it’s clear that Dylan never saw this end coming—although he is hardly surprised once it does.

In the final scene, we return to the original sin—the night Dylan and Kyle went home together. It’s an understandable way to end this piece, but it doesn’t pack quite the punch it wants to, perhaps because we don’t really learn anything new. Although we see Kyle’s polite comments about Dylan’s play, paired with the mutual flirtation, we've heard all this in previous scenes. So while this culmination doesn’t quite detract from the intensity of the previous scenes, it lets us off easy. And with a play like Perfect Teeth, I want to be challenged even more.

(Perfect Teeth played at Theaterlab, 357 West 36th Street, through August 12, 2018. The running time was 60 minutes with no intermission. Perfect Teeth ran in rep with McCoy's Dick Pix. Performances of one or the other were Wednesdays through Fridays at 7:30; Saturdays at 6 and 8:30; and Sundays at 3. Tickets were $20 ($32 for both plays) and were available at perfectpixplays.com.)

The cast is Jose Joaquin Perez and Maxwell Eddy.