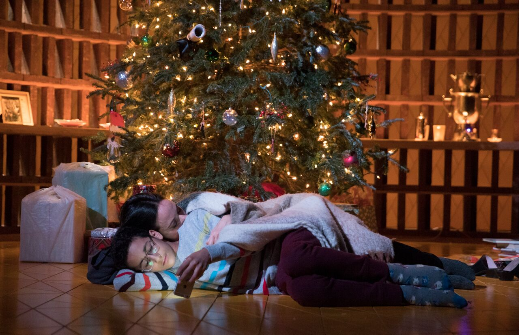 BOTTOM LINE: An enchanting and poetic new play about Iraqi refugees that is perfect for the holiday season.

What does it mean to abandon the land of your birth and accept citizenship in a new country? What does it mean to watch the irrevocable destruction of your homeland, and what does such upheaval do to your relationship with a culture and heritage that goes back 3,000 years? These complicated questions and more are raised in Heather Raffo’s poetically brilliant new play Noura. The smart and stimulating dilemmas she presents kept my mind racing long after the play ended.

Noura (Heather Raffo) is a Christian Arab from Iraq. Now, eight years after fleeing her country as a result of the American invasion and ISIS’s rise to power, Noura and her family have just obtained U.S. citizenship. Her husband Tareq (Nabil Elouahabi) is anxious to embrace his Americanism, insisting that he be called Tim, that their son Yazen (Liam Campora) be called Alex, and that Noura be called Nora. It is no accident that her new name invokes the famous heroine from A Doll's House, as tropes and themes in Raffo’s play clearly echo Ibsen’s masterpiece. The comparison takes nothing away from Raffo’s originality, but suggests the heritage of the theatre as a lens through which to view this intelligent new play.

Apropos of the season, the play begins on Christmas Eve, and Noura is focused on continuing her Iraqi Christian tradition of fasting to empathize with those less fortunate. “Jesus mom! Nobody fasts on Christmas Eve! Can’t you be American for once?!” her son protests. And with that, the central question of identity is artfully raised. Much to Noura’s chagrin, Alex spends much of his time playing violent video games on his Playstation as sheltered American kids—who have not been through the same violent upheaval—are wont to do.

The play’s highest moment of tension comes when Maryam (Dahlia Azama), an Iraqi orphan whom Noura has sponsored to attend college in California, pays a visit and reveals that she is pregnant out of wedlock. A shocked Noura struggles to channel an American liberal tolerance. But when her husband discovers that Maryam is pregnant, his American aspirations disappear and words like “dishonor,” “shame,” and “slut” are thrown around. It is clear that when it comes to a woman’s control over her own body, Tareq would prefer to retain his old world values. Raffo seamlessly infuses themes of culture clash and identity into this family drama; the conflict is uncovered organically without the sense that the playwright is looking for trouble.

With the help of her excellent design team, director Joanna Settle heightens the sensual and lyrical elements in Raffo’s script. At the top of the play the stage direction reads “Noura takes a breath.” Sound designer Obadiah Eaves provides a loud inhale as the house lights brighten momentarily, and then the entire space goes black on the exhale. Andrew Lieberman’s gorgeous set design prominently features a Christmas tree—starkly reminiscent of act one of A Doll's House—and gives Noura’s home a uniquely circular shape that both reflects her profession as an architect and symbolically calls life cycles to mind. Settle even manages to create a sense of holiday magic with her use of snow, presented realistically early in the play when it is restricted to the exterior space. By the play’s end, the snow falls inside the apartment, allowing us to bask in the enchanted spirit of Christmas.

Playwrights Horizons has found a wonderful alternative to the more well-traveled holiday fare. And far from a heavy, depressing drama, Raffo’s script is somehow a hopeful and optimistic take that flits and floats like a holiday miracle.