Written and Performed by Judy Frank; Directed by Kathryn Markey 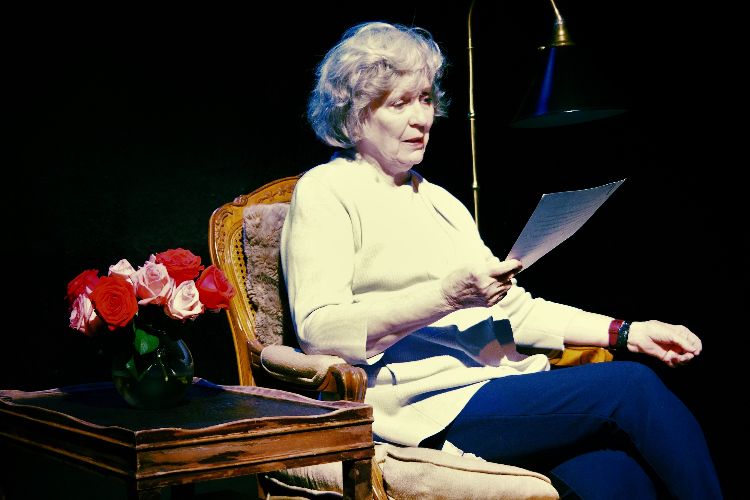 Judy Frank in Notes to Wherever. Photo by K.M.

BOTTOM LINE: A solo show told through letters of one woman’s struggle to live a full life after the death of her husband of forty years.

How we remember our loved ones, and process their passing, changes as we move through the years. Losing a life partner is even harder. After talking to them every day for a lifetime, it often seems impossible to maintain that connection. Friends and family help, but what happens when you’re at the stage in life where your friends disappear on a daily basis? You hold on to what you can; pictures, mementos, and memories. Sometimes you just have to send letters, these notes to wherever.

Based on her memoir of the same name, Notes to Wherever is a collection of letters written by Judy Frank to her husband Mike after his passing. Exploring how life must go on even when it feels like it can’t, Frank tells a genuine, moving, and sometimes humorous tale. Beginning with a note dated a few years after Mike’s death, Frank reads letters to Mike about her life now and how it’s changed since he has gone to “playing harps” in heaven. From tales of the day Mike died and laughter from the EMS to a trip to the bay of Naples to spread his ashes, from anecdotes of life as a working actor to stories from The Actors Fund, Notes to Wherever paints a lovely picture of how hard it is to go on when your other half is taken from you.

As the house lights went up after the show, one audience member proclaimed “very sweet,” a sentiment that entirely sums up this production. Full of heart, Frank tells her story with the grace and subtlety of an old guard of New York theatre. With a rare sly smile and glance to the audience, Frank lets slip a few clever quips, keeping the piece light and engaging. She is a long-time National Ambassador and member of The Actors Fund, reading stories full of gratitude about her experiences with the Fund and friends. While the tales themselves are engaging, a lack of commentary or transition between letters leaves the play feeling much more like a book reading than an evening at the theater.

With set dressing provided by Nanette Miller, this show lives in a simple space with an armchair, dining chair, and table, evoking a cozy, well-loved New York apartment. Lighting design by David Maria D’Olimpio is mostly effective, with a warm and cool wash carrying us on the emotional journey. But for much of the performance, lights go up and down quickly in strange places and Frank’s face is often dark and hard to see. Music choices by an uncredited sound designer are tasteful and appropriate, although the volume sometimes drowns out Frank’s storytelling.

Director Kathryn Markey’s staging is simple, letting Frank move through her home in a comfortable but stagnant way. Moments, especially near the end of the piece, are very well crafted and full of emotional complexity. The letters are extraordinarily well-written but lengthy, causing Frank to rely heavily on her props, more often than not reading directly from the letter itself. This makes the piece quite difficult to engage with, but Frank’s subtle literary wit repeatedly captures our attention.

Notes to Wherever is a lovely little piece about a woman’s love for her husband and a need to feel connected after his death. Though not consistently engaging, each letter stands on its own and serves as a lovely look into a woman's struggle to continue living a full life. Resonating well with friends, family, and old theatre folk, Notes to Wherever is a lovely tribute to Mike, as well as a fundraiser for The Actors Fund. Frank carefully and lovingly crafts her story with hidden lessons and raw honesty, creating a clear look at grief and the struggle to continue when life as you knew it is gone.

(Notes to Wherever plays at Cherry Lane Theatre, 38 Commerce Street, through December 22, 2018. Running time is 90 minutes with no intermission. Performances are Mondays through Wednesdays at 7; Fridays at 7; Saturdays at 3 and 7; and Sundays at 2 and 7. Tickets are $40, and all proceeds go to benefit The Actors Fund. Tickets are available at cherrylanetheatre.org.)

Notes to Wherever is written and performed by Judy Frank. Directed by Kathryn Markey. Lighting Design by David Maria D’Olimpio. Stage Manager is Kellie McMenemon.