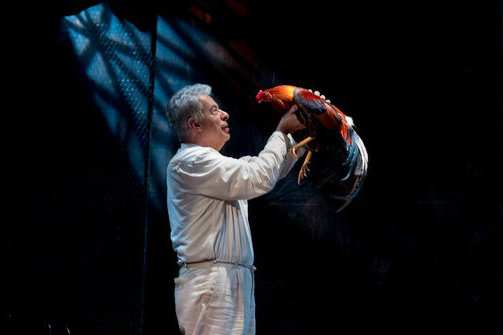 Germán Jaramillo with Horatius in El coronel no tiene quien le escriba (No One Writes to the Colonel). Photo by Michael Palma.

BOTTOM LINE: A perfect reason to check out Repertorio Español, No One Writes to the Colonel is a lovely adaptation of a lesser-known (but not lesser) work by Gabriel García Márquez.

There is a stunning moment near the beginning of Repertorio Español’s adaptation of Gabriel García Márquez’s El coronel no tiene quien le escriba (No One Writes to the Colonel). A group of mourners makes their way to a rainy funeral for a local musician. The pace slows, the lights shift, and the music intensifies as the group tilts slowly back and forth. It evokes, in a way that is purely theatrical, the magical realism we associate with the work of García Márquez. While it doesn’t last long, it’s one of those theatrical moments that may well be etched in your mind long after the lights come up.

It’s rare for a production to provide even one such stunning moment, so it seems churlish to be disappointed that we don’t get another one here. But perhaps this is fitting, since El coronel…—purportedly García Márquez’s favorite of his works—is much more realism than magical. And it’s a simple story set in a small town, about a patient yet frustrated colonel, his ailing and irritated wife, and their promising rooster.

An unnamed Colonel (Germán Jaramillo) has been waiting for years for news of his pension. Although he dutifully checks the mail every Friday, “no one writes to the colonel.” But he and his wife (Zulema Clares), still mourning the death (by police) of their son Augustin, are running out of things to sell for food. And it doesn’t help that they also have to feed their son's rooster—the goal is for the rooster to fight in a few months, and then everyone will get rich.

Not much happens over the course of the play, but don’t mistake the stasis for a lack of dramatic tension. The Colonel, frustrated by the continued delay of his pension, meets again with his ineffective lawyer (Alfonso Rey), who advises him to just “be patient” even though it is clear that strategy isn’t working. He invites the local doctor (Luis Carlos de la Lombana) to check up on his wife, visits during which the two exchange prohibited messages. And the Colonel meets with the group of his son’s friends (Txemi Parra, Erick González, and Paul Montoya), who are looking forward to the rooster training in a few months. Later on, the Colonel must wrestle with an offer from the local boss Don Sabas (a menacing Mario Mattei), a stand-in for the rampant corruption that pervades many South American governments. But this everyday corruption, like most everything else, is a matter of course in this community—nothing changes much. And this stasis is exactly the point; even without the “magic” in his other works, this story is still pure García Márquez (it even mentions Macondo, the famous fictional town featured in One Hundred Days of Solitude).

Jaramillo gives an incredible performance as the Colonel; the (human) stand-out of the cast, Jaramillo manages to evoke both patience and frustration, resignation and resolve. What is more, his performance captures that particular yet ineffable spirit that epitomizes South American literature. As the Colonel’s wife, Zulema Clares brings some heightened physicality to the performance, at times stringing her hands through her hair or dragging a chair behind her, as if words were not sufficient to communicate her exhaustion. And the other supporting cast members, especially Alfonso Rey as the amusingly blasé lawyer (if Don Sabas is corruption, the "Abogado" is indifference), all work well to create an environment in which the Colonel is somehow both the central focus and also roundly ignored.

And then there is the Colonel’s rooster who, like the Colonel and his wife, has no proper name—just “El Gallo.” He’s played by a cock named Horatius, who should win an award for best animal actor. Not only is he onstage a LOT, but he also seems quite at home there. Whenever he is released from his cage, he struts around, every now and then improvising with the occasional line of his own. Clearly comfortable with both Jaramillo and the audience, he somehow knows enough not to upstage his human cast members.

Triana’s production does a solid job of translating the necessary García Márquez-ness to the stage. Although Raúl Abrego’s set design isn’t lavish—primarily just a few swinging fences that do a remarkable job of creating different locations—in combination with the wonderfully atmospheric lighting (Manuel Da Silva), costumes (Fernando Then), and sound (Jimmy Tanaka), it all coalesces into a recognizable evocation of García Márquez’s fictionalized Colombia.

And then there’s the language—as is the case with most work at the gem that is Repertorio Español, the actors speak in Spanish, with individual captions (in either English or Spanish) on the seat in front of you. It’s a great way to allow those (like me) who need a translation to have one, without forcing potentially distracting supertitles onto those who don’t. More than just a gimmick, this insistence on Spanish is crucial to establishing the world of the play, especially when that world comes from García Márquez. (Not to mention that, in a time when some feel free to verbally assault those who speak Spanish in public, the existence of a New York theater company devoted to staging works in Spanish, and for a largely Spanish-speaking audience, becomes, perhaps, a little bit revolutionary.) El coronel no tiene quien le escriba is a great reason to check out Repertorio Español, especially if you’re never been.

(El coronel no tiene quien le escriba (No One Writes to the Colonel) plays at Repertorio Español, 210 West 46th Street. Running time is 75 minutes, no intermission. Performance schedule varies (mostly Fridays at 8, Saturdays at 3 or 8, and Sundays at 3); see website for details. Tickets are $17 - $72 (with $5 discount for students and seniors). To purchase tickets, and for more information, visit repertorio.nyc.)