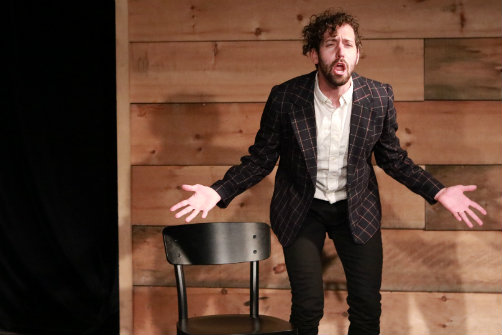 BOTTOM LINE: Nicky Nasrallah pulls out all of his improv tricks as he belts out a whimsical performance in this revamped production.

Despite the sleepiness and sluggishness of the rainy Sunday afternoon, Nicky Nasrallah seemed unfazed as he opened his show like any late night improv jam. In the true spirit of this indie show, Nasrallah begins his set asking the audience for suggestions. In a perfect improv set, the audience is alert, contributing in tandem with their host. In this case, the audience was a touch more timid, and Nasrallah stepped forward to help get the energy flowing. He asked one woman in the front row "What do you do for a living?", then another at the back of the house "where did you grow up?", then a more sensitive "what are you afraid to tell people about yourself?", and finally "what is the name of the musical you're about to see?" With that, the miniature, completely improvised musical I Like Penguins—about Kris the tile design consultant who lived in New York City and had a friend with a crippling fear of crowds—was born.

Although I Love Penguins would certainly never make its way to a Broadway stage, Nasrallah handles the audience suggestions with great enthusiasm, and structures a clean mini musical with the help of his accompanist, James. They sing some upbeat tunes, including the obligatory "I want" song; they incorporate a spookier number—sung by Kris' tile design boss; and they even showcase a fun portion of soft shoe tap. This is all to say that although Nicky's Solo Improvised Musical will be completely different for every performance, the heart of Nasrallah remains in the work, and he certainly has fun in the process.

Nasrallah, a Toronto-based performer, is also the creator of Beyography—a Beyonce tribute dance class that has taken Canada by storm. If you're a diehard fan of Queen B, or just hoping to share a laugh, Nicky can bring a smile to your dreary Sunday.