Mike Birbiglia's The New One

Written and Performed By Mike Birbiglia; Directed by Seth Barrish 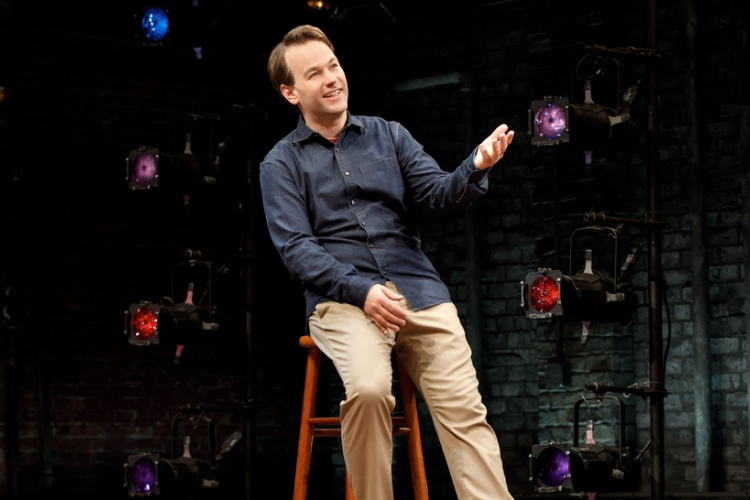 Mike Birbiglia in The New One. Photo by Joan Marcus

BOTTOM LINE: Mike Birbiglia gives a master class in how to craft a story, taking his solo show to Broadway for a limited run.

Mike Birbiglia really does not want kids, or at least, as he recounts, not for the first nearly 40 years of his life. On this point, he explains, he’s been “very clear” with his wife Jen. When he visits his brother Joe, who’s a parent, instead of heading to a concert, he goes to sleep at 7:30 “because being around kids makes me want to be unconscious.” And Birbiglia has come up with a list of reasons why he doesn’t want kids, not least of all because his body “is a lemon.” Birbiglia was diagnosed with testicular cancer at 19, and has a vicious sleep disorder (as detailed in Sleepwalk With Me) that once caused him to go through a second-story window in a hotel; more recently he was diagnosed with both Lyme disease and type 2 diabetes. But then Jen—who again, he’s been very clear with—tells him that if they had a baby, it would be different. His response: “Oh no, you got bit!”

The two go through numerous ordeals before she gets pregnant, followed by a difficult pregnancy. After she gives birth to their daughter Oona, Birbiglia, undeniably moved, says, “This woman I love becomes a mother in front of me. I pretty much stay the same.” As Birbiglia provides a fascinating glimpse into their relationship, it’s evident there’s a lot of truth behind that remark. Their oft-repeated refrain—“I don’t think having kids will change our lives”—is one that she enables him to believe in, with all the sacrifices she makes taking care of Oona.

As a fan—Mike Birbiglia and I go way back (not that he knows this…yet)—I was excited about The New One, but a little worried that the subject matter would have him veering into earnestness. Happily, my fears were largely allayed by his funny, honest, and beautifully paced performance deftly directed by Seth Barrish in the transfer to a bigger Broadway stage. I do find it curious that, in the face of so many obstacles, he never mentions whether he and Jen discussed adoption or thought about giving up. My big objection, however, was with the ending: a sentimental wrap up that doesn’t feel earned after spending the evening with a guy who is convincing as someone who loved his life before, and never wanted, children.

That being said, it is no small matter to laugh steadily for 90 minutes (and at our preview, the show stretched closer to two hours, in part because Birbiglia stopped the show with ease multiple times, including a breezy recap for a latecomer). I even snorted at one of the scenes (I’ll just say Starbucks and leave future audiences to discover it). The Off Broadway run sold out so, if like me, you’ve been “stalking” Birbiglia for a decade, don’t miss your chance to have a thoughtful and joyous time with The New One.