Book by The Bengsons and Sarah Gancher; Music and Lyrics by The Bengsons; Directed by Anne Kauffman
Produced by Ars Nova, piece by piece productions, and Z Space 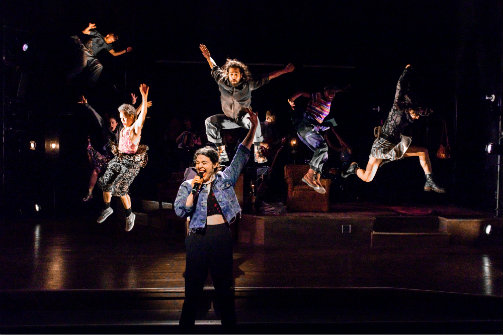 BOTTOM LINE: A blend of autobiographical concert and theatrical fiction, The Lucky Ones is an exhilarating examination of family, joyous youth, and what it can take to survive loss.

The Bengsons open The Lucky Ones by welcoming the audience as a friend, bringing our awareness to the space we are currently inhabiting. They talk about the history of the Connelly Theater, then expand that awareness to what lies beneath our feet—the theater’s foundations, and what lies even deeper below. This opening meditation is the bedrock of the fantastic folk-rock journey through Abigail Bengson's adolescence with her family, one that helps her to understand her present. It asks us to question our own foundations, and how one tragic event can cause them to crack, or reveal cracks that were always there.

Ever since I encountered The Bengsons at Cincinnati's Know Theater with their previous work Hundred Days, I have been a fan of the art they create. Not only are they talented musicians, but as storytellers they blend folk concert and modern musical theatre to weave heartbreakingly human, semi-autobiographical tales. The Lucky Ones is a natural evolution of this blending, with a larger cast and wider scope that escalates their storytelling. Their collaboration with Sarah Gancher has produced a book that is filled with adolescent idealism, adolescent truths, and adult acceptance.

Anne Kauffman's direction and Sonya Tayeh's choreography work impeccably well with the music to create moments of spectacle and theatricality juxtaposed with moments of quiet stillness. When school chairs are haphazardly placed on top of one another to build a bonfire, the ensemble radiates the rowdy exuberance of a group of young adults running wild after school. In the second act, these same chairs become vehicles for Abigail’s family to have intimate moments with the audience, discussing how they individually survived the shattering events.

Indeed, these chairs highlight the stylistic shift between acts. The more theatrical first act is filled with youthful energy, with one song flowing into the next. This is cut quickly in the more minimal second act, where a text-heavy, concert-like feel creates a vulnerable intimacy between performers and audience. Kauffman navigates these shifts fairly seamlessly, with only one or two instances of dropped momentum in the second act.

A testament to Kauffman and Tayeh’s leadership, the show’s entire cast, tops to toes, gives an inspiring performance. Each movement and action feels organic and necessary, coming from a place of intention, and each person on stage has a palpable connection and relationship with every other performer. The standout performance, however, is Abigail Bengson herself, who shows such fragility while reliving these personal scenes; the strength she must possess to do this night after night is striking.

Designers Rachel Hauck (sets) and Amith Chandrashaker (lighting) ensure that the design of The Lucky Ones follows its initial premise. Both work in tandem to highlight not only the players, but also the walls of the Connelly and the unique wooden stairs that bridge the Connelly’s stage and the audience seating. This attention to the space and its history is exactly in line with the core of the piece, and helps generate a sense of cohesion between the action and the environment.

Furthermore, a mirror stage of sorts has been built behind the audience in what was the Connelly’s choir loft. This is used throughout the show to great dramatic effect, whether for the ensemble as Greek chorus, or to showcase the emotional distance between two characters. While this distance does require a little whipping of heads back and forth to take in every moment, the effect is worth the neck strain.

In The Lucky Ones, it is viscerally evident that every facet has been considered in creating one united, yet nuanced, message. I laughed, I cried, I jammed. I witnessed storytelling of intense emotional depth, and ultimately, the joy of storytelling.

(The Lucky Ones plays at the Connelly Theater, 220 East 4th Street, through April 28, 2018. Running time is a little over 2 hours, with one intermission. Performances are Mondays through Wednesdays at 7; Thursdays through Fridays at 8; and Saturdays at 3 and 8. Tickets are $45 general admission, $65 reserved. For further details and ticket purchases, contact Ars Nova at arsnovanyc.com or by calling 212-352-3101)

The Lucky Ones has a book by The Bengsons and Sarah Gancher, and music and lyrics by The Bengsons. Directed by Anne Kauffman. Choreography by Sonya Tayeh. Set Design by Rachel Hauck. Lighting Design by Amith Chandrashaker. Sound Design by Nick Kourtides. Music Direction by Wiley DeWeese. Music Supervision by Kimberly Grigsby. Stage Manager is Amanda Spooner.