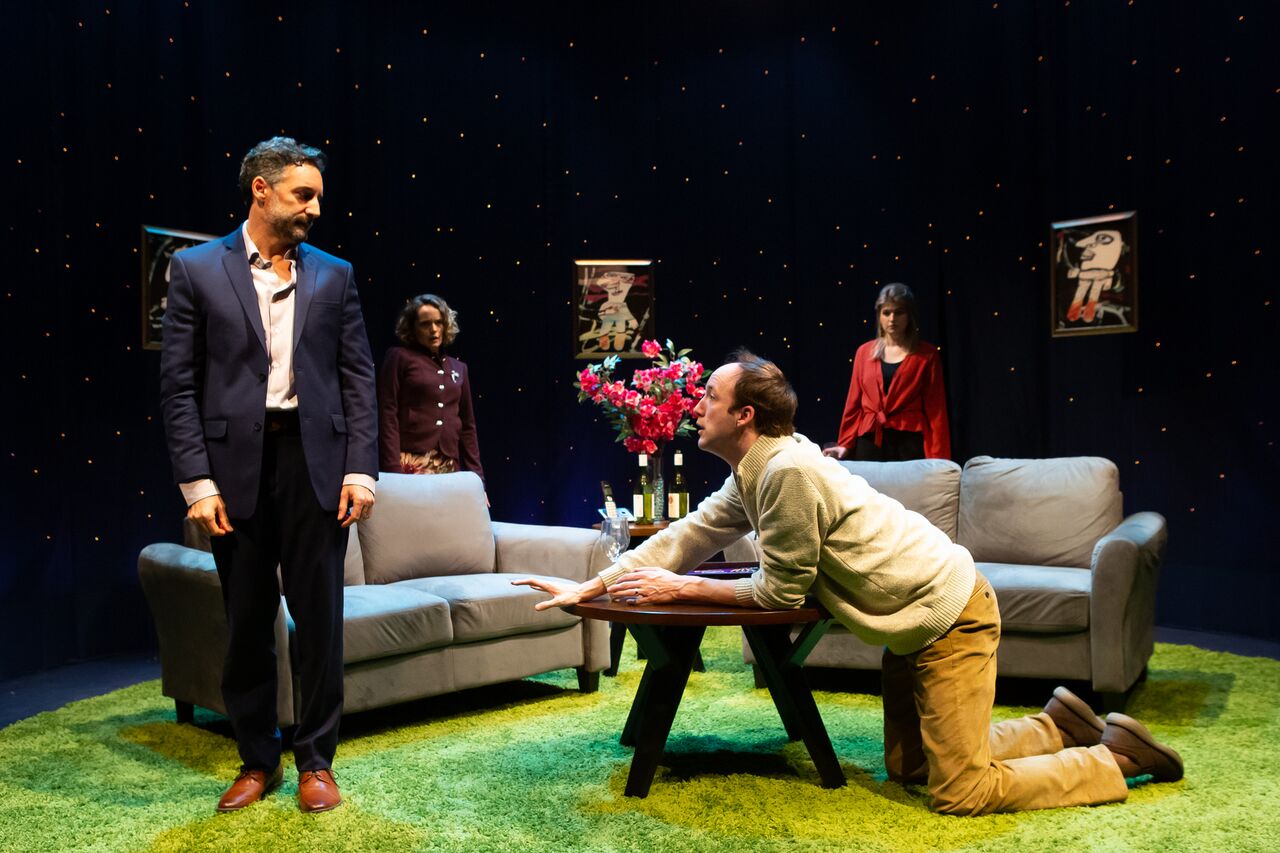 Life x 3 begins with Henri (James Patrick Nelson), a frustrated astrophysicist who has not published in three years, shouting across his living room at his wife Sonia (Claire Curtis-Ward) about the proper way to put their six-year-old son to sleep. Things already were not going Henri's way, but when the doorbell rings it's not good news. Fellow researcher Hubert Finidori (Dominic Comperatore) and his wife Ines (Leah Curney) have arrived for dinner, which Henri and Sonia thought was scheduled for the following evening. Sonia knows that Henri will bend over backwards to please the influential Hubert, which becomes more difficult to do gracefully at a dinner party with much wine but no food, save chocolate and crisps. Hubert strategically announces that another scholar may have made Henri's long-term project obsolete. Can Henri save face in this situation? Will he let his grumpy child manipulate him the way Hubert does? Will Sonia, who is qualified to be a lawyer, hold her own against her passive-aggressive husband and the seductive Hubert?

Then we are back near the beginning of the evening, to see it replayed two more times with subtle variations. Little changes in attitude make all the difference. In some scenes, Ines is the one who got the dinner date wrong. Sometimes Hubert is actively trying to seduce Sonia, sometimes she is pursuing him. In one case, Henri is on speaking terms with his astronomical competitor in Mexico, and is aware of Hubert's bombshell before it can be dropped. While we can never trust what the characters say, their wine-soaked banter is memorable. For example, Sonia says to Ines à propos of their verbally abusive spouses: "I don’t resent your husband, it’s my husband I resent." I applaud the playwright (and the renowned translator Christopher Hampton, known for Dangerous Liaisons) for dissecting this bourgeois social scene to vindicate women from the usual scapegoating by insecure men.

Is "Finidori" a stand-in for "infinite"? Throughout the three scenes, the men who study galaxies struggle to "keep a sense of proportion" and ask if the actions of mankind really matter. Sonia opines that, like the toy train set her son arranged, all the works of man are made to be destroyed. In contrast, Ines later gets so drunk she "passes through the drunkenness barrier" and fearlessly argues that without human poetry, the universe would be an empty place. Henri and Sonia's son appears only as a voiceover, tellingly deciding in the end that he can stop demanding snacks, entertain himself and go to sleep at the proper time. Adults, it seems, are capable of sensible action, too.

The four cast members are an immensely versatile bunch. Director Jerry Heymann has chosen to use British accents, giving the talented actors many chances to take umbrage and wax sardonic. I was particularly impressed with Claire Curtis-Ward as Sonia, a woman who does not suffer fools. That said, the excellent performance from James Patrick Nelson as Henri goes through the whole confidence spectrum from sycophant to toreador. Dominic Comperatore as Hubert, who enters assuring his wife that Henri will lick his boots, has his own pitfalls ("cherchez la femme", as they say). And Leah Curney as Ines enriches the show with inebriated self-pity as well as a surprising turn as peacemaker.

Composer Janet Bentley has provided ethereal, jazzy music which, at times, veers off in a direction dictated by the mathematical constant "e" (an irrational and transcendental number used in logarithmic and exponential functions). In layman's terms e, or 2.718281828459045..., when interpreted on a C-major diatonic scale, is the central theme of the score. Genevieve V. Beller's costumes (classy for the guests, extremely casual for the hosts) contribute to the power struggle. Brian Dudkiewicz's gauzy set, festooned with points of light, left me feeling pleasantly lost in space. And Paul Hudson's lighting gives fortitude to those who inquire into the flatness of the halos of spiral and elliptical galaxies.

(Life x 3 plays at Urban Stages, 259 West 30th Street, through December 8, 2018. The running time is 1 hour 30 minutes with no intermission. Performances are Wednesdays through Saturdays at 7:30; Sundays at 3. Tickets are $25 and are available at brownpapertickets.com or by calling 800-838-3006. For more information visit newlighttheaterproject.com.)