By Ian Allen; Directed by John Vreeke
Produced by The Klunch

Off Off Broadway, Solo Show
Runs through 7.8.18
The Flea Theater, 20 Thomas Street 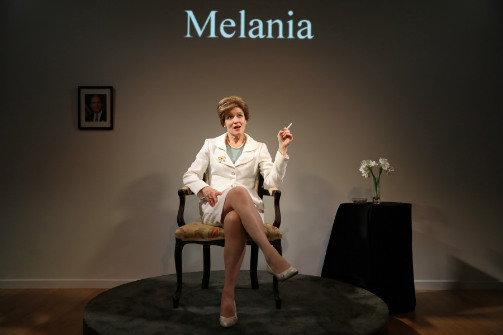 BOTTOM LINE: While not as hard-hitting as it could be, this satire about former First Lady Laura Bush features a hilarious script from Ian Allen and an appealing performance from Lisa Hodsoll.

Our attention has been so focused on the shortcomings of our current president that George W. Bush‘s more than questionable legacy has been pretty much glossed over. Laura Bush Killed a Guy takes a look back at the seeds of this legacy, a legacy many have found far less distasteful when compared to the current administration. At one point, Laura Bush (Lisa Hodsoll) even quips “If you could have us back you would, wouldn’t you?”—a sentiment to which several audience members audibly agreed. (The real Laura Bush recently improved her own public perception with her recent Op-Ed criticizing Trump’s Immigration Policy.) But this piece isn't so much about the rose-colored glasses used to reflect on George W.’s somewhat forgotten time as president as it is about the fact that yes, as the title suggests, former First Lady Laura Bush did in fact kill a guy.

Ian Allen’s inventive comedic script is divided up into three parts, each of which begins with Ms. Bush lamenting that if you Google her, the first three things that come up are her award-winning recipe for Cowboy Cookies, her library charity, and the fact that she “killed a guy.” As 17-year-old Laura Welch, the future First Lady ran a stop sign and crashed into an oncoming car, killing her classmate Michael Douglas. People have long speculated about Laura’s true relationship with Douglas, and if the accident was truly an accident; Laura Bush Killed a Guy explores this speculation and hearsay alongside the substantiated facts.

Three possibilities are presented: in the first, the "accident" is actually intentional murder for which Laura's parents congratulated her. In the second, Michael is a classmate who wronged her friend, and is killed when Laura’s drunken prank goes awry. In the third, the crash is an honest accident in which Laura kills the only man she ever truly loved. When Laura is told she will be charged with vehicular homicide, her wealthy parents swoop in and the charges are dropped. Laura also provides alternate tales of how she wound up becoming Mrs. Bush. In one telling, she meets her future husband when she confronts an all-night party at her tony Houston apartment complex. In another (and the official) version, they met at a barbecue in Midland, Texas and later went on a miniature golf date.

Laura Bush Killed a Guy is light on political commentary and analysis—rather than offering insight into the family’s political legacy, Laura criticizes the Bush clan for nicknaming Barbara Bush after a horse. At a time when a conservative agenda seems to be winning, a satire with more of a political basis would have hit harder and likely resonated deeper with the audience. Or perhaps it's all in the timing—this piece might have had more punch at the beginning of Obama’s presidency. However there is still plenty to laugh at, even if our memories of the Bush era have gotten a bit rusty thanks to the constant political drama of recent years.

Lisa Hodsoll is immensely appealing as Laura Bush, firing off one-liners that seem off the cuff, and engaging the audience by ad-libbing with ease. Through moments of emotional drama as well as snappy comedy, her performance transcends mere satire or impersonation. With the help of director John Vreeke, Hodsoll tackles the script’s demands, including repeated dramatic readings of her Cowboy Cookie recipe. (A platter of cookies even sits by the front door, and Laura asks the audience for their opinion of the recipe.) Kim Deane’s minimalist set evokes a White House where the first lady was often said to carry an air of impersonality. And Ian Allen’s script offers plenty of comedic fodder—including jokes about other first ladies, past and present—and seems to offer a critique of the narrow, sexist role Laura Bush was forced to occupy. As the show goes on, it gains momentum as we catch on to the strategies Allen is employing in his script. Ultimately, Laura Bush Killed a Guy offers an opportunity to take a break from our current frustrations and laugh at our political past.

The cast is Lisa Hodsoll.