In The Body Of The World 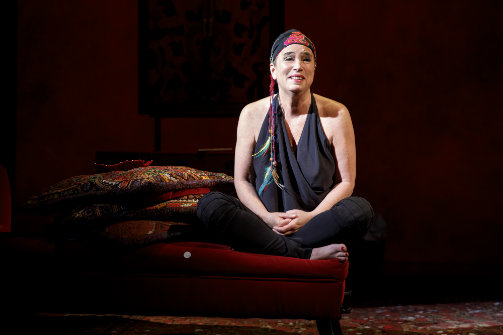 Eve Ensler in In The Body Of The World. Photo by Joan Marcus.

BOTTOM LINE: A frank, fierce, and surprisingly funny look at the impact of Ensler's uterine cancer diagnosis, juxtaposing the limits of medical science with the healing power of feminist political engagement.

As a child, playwright Eve Ensler’s survival depended on her ability to dissociate from her body. Like many abused kids, she’d imagine that she was somewhere—anywhere—else when her dad beat and molested her. The strategy allowed her to not just survive the abuse, but to thrive, becoming a successful and widely lauded activist and award-winning writer. But then the unraveling came. After Ensler was diagnosed with advanced uterine cancer in 2010, her survival depended on reconnecting with the corporeal self she had long neglected. She was 56 years old.

In The Body Of The World tells the story of that process and offers a harrowing look at cancer, its treatment, and the long road back to productivity. Although it is not for the squeamish, it is both inspiring and savvy. What’s more, it is infused with humor and delivers more than a few hilarious anti-Trump barbs and quips. After all, as Ensler’s entire career has emphasized, the personal is political, and vice-versa.

Indeed, Ensler was in the Democratic Republic of Congo—named “the worst place in the world to be a woman” by the United Nations—working to establish City of Joy, a residential treatment program for female survivors of rape and war crimes, when her tumor was detected. In short order, she found herself in Rochester, Minnesota, a patient at the Mayo Clinic. There was major surgery, followed by months of chemo, and a barrage of setbacks.

And there were questions. "Why me?," Ensler wondered. She’d been sober for more than 30 years, had stopped smoking, was vegetarian. Could the cancer be payback for years of anorexia, promiscuity, and two failed marriages? Or could it be caused by our unavoidable exposure to poisoned air, water, and land?

Ensler’s anguish is apparent as she delves into these important questions, but the script takes great pains to veer away from self-blame or pat conclusions. Instead, since there can be no definitive answers, Ensler zeroes in on activism as cure, and details the healing that resulted from her ongoing, collaborative, and ultimately successful efforts to get City of Joy up and running. It’s an empowering example of the necessary balance between self-care and care of others, and is something to cheer and savor. That said, not everything in In The Body Of The World succeeds. For one, a scene between Ensler and her mom leaves more questions than answers. Similarly, her relationship to spirituality—is she Buddhist, Hindu, atheist?—is left dangling.

Overall however, thanks to Myung Hee Cho’s scenic design—the set is by turns spare and lavish—and to Finn Ross’s evocative background projections, Ensler’s triumphant recovery and return to writing, acting, and advocacy leaves us feeling buoyant and uplifted. One can only hope that there is redemptive power for the actor as well, as she repeatedly highlights her body’s betrayal and the arduous process of attending to its ongoing demands and innumerable quirks.

(In The Body Of The World plays at NY City Center, 131 West 55th Street, through March 25, 2018. The running time is 80 minutes with no intermission. Performances are Tuesdays and Wednesdays at 7; Thursdays and Fridays at 8; Saturdays at 2 and 8; and Sundays at 2. The schedule varies slightly on Wednesdays, Saturdays, and Sundays, so see website for details. Tickets are $90 and are available by calling City Tix at 212-581-1212 or at nycitycenter.org. For more information visit bodyoftheworldplay.com.)

In The Body Of The World is written and performed by Eve Ensler, based on her 2013 memoir. Directed by Diane Paulus. Scenic and Costume Design by Myung Hee Cho. Lighting Design by Jen Schriever. Sound Design by M.L. Dogg and Sam Lerner. Projections by Finn Ross. Movement by Jill Johnson. Production Stage Manager is Katie Ailinger. Stage Manager is Jenny Kennedy.