The House of Ghostly Haunts

Created and Performed by Cardone
Produced by Dixon Place and Vaudevisuals 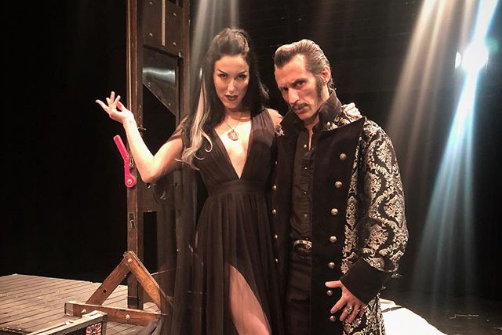 Marlena Dee and Cardone in The House of Ghostly Haunts. Photo by @cardonemagic.

On a single night of October 30th, Dixon Place hosted Cardone’s spook show The House of Ghostly Haunts. Pumped by the Halloween spirit and seduced by the over-the-top language of the show description, I was intrigued by the combination of magic and horror. As a magic show, The House of Ghostly Haunts delivers. The charisma and skill of Cardone, our host of multiple magic talents, are truly remarkable. But the spooky component would benefit from further development.

Spook shows, originated by magician Elwin-Charles Peck in the 1930s, added a flair of entertainment to the once popular spiritual sciences. Unlike the charlatan mediums at the turn of the 20th century, Peck didn’t try to convince his patrons that they were communicating with the deceased. He demonstrated the same illusions but in a different context. Instead of empty promises to summon the dead, he delivered an evening of sheer entertainment, with some mysterious overtones.

Taking the baton from his predecessor, Cardone revives the genre of the spook show in his entertaining and family-friendly evening of wonders and scares. With mustache curled and a lavish black-and-gold jacket, he bedazzles the audience right away. The magician’s nonchalant demeanor is peppered with the grand gestures of a circus master of ceremonies. In the beginning he unveils his plan for the finale by taking the cover off of a full-sized guillotine, and then gradually builds up the thrill of danger throughout the evening.

To quote Cardone’s ornate opening: “Some of the things you will see are real and dangerous. Some are happening only in your imagination. And sometimes you won’t know the difference”. I certainly wasn’t able to tell the difference in a lot of cases. Even when I was brought up on stage to assist and had a chance to watch the magician up close while performing a trick of swallowing razor blades.

In Cardone’s broad repertoire, the most exciting tricks continue the overarching theme of danger. The feeling of concern adds to the curiosity during the swallowing of razor blades or bleach, the straight-jacket escape or the guillotine illusion. The magician masterfully builds up suspense, occasionally mixing pathos with humor. A lot of the jokes are about his concern about messing up his perfect Elvis-style pompadour.

Mentalism, ventriloquism, and close-up magic are only a few of the skills that Cardone possesses. But although variety is impressive, sometimes less is more. It's like the difference between an all-you-can-eat buffet and an upscale restaurant: you can gorge until you burst or savor every note of a curated experience. The House of Ghostly Haunts lingers somewhere in between, but has the full potential to be Michelin star-worthy (or whatever is the equivalent in the world of magic and entertainment). The scale is also an issue: some of the smaller cards and mentalism tricks drown in the large theater.

Cardone does a good job presenting most tricks and even shares a couple of trade secrets. It doesn’t spoil the magic at all, but actually makes you feel like an accomplice. The interaction with the audience (some of which is or feels improvised) is sincere and very engaging. Despite his bad-ass punk rock poise (or maybe because of it), Cardone is especially good with kids.

The showing of a private collection of curiosities, which includes the two-headed vampire bat, a rock from castle Dracula, and a shrunken head, provides a nice change of pace. The demonstration of each object is accompanied by the story of how it was acquired. The face of the proud collector lights up as he shows each object to the audience, now standing around him on stage.

Less successful is the “haunted house” style finale. For the duration of several long minutes, the audience observes floating fluorescent characters enter and glide along the stage, occasionally yelling “Boo!” The parade of evil spirits is supposedly a tribute to Peck’s original spook show, but unless you are in the first row, it doesn’t work as currently staged. The House of Ghostly Haunts, while being a potent magic show, should learn a few theatrical “tricks” in order to become a truly great experience.

(The House of Ghostly Haunts played at Dixon Place, 161A Chrystie Street, on October 30, 2018. The running time was 1 hour 30 minutes with one intermission. Tickets were $30; $20 for students/seniors and before Sept 30. For more information, visit dixonplace.org.)

The House of Ghostly Haunts is created and performed by Cardone. Produced by Dixon Place and Vaudevisuals.