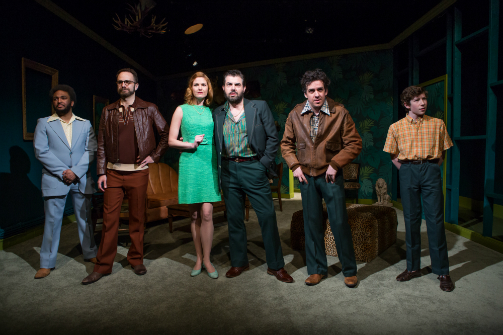 Anyone who has read Kurt Vonnegut knows his iconic and offbeat sensibilities. Vonnegut is best known for novels like Slaughterhouse Five, yet his familiar dark sense of humor shines through in Happy Birthday, Wanda June, a play he wrote in 1971. While the rotary phone clearly places us in another time period, the play's portrayals of toxic masculinity and its debates about wars and fighting are still extremely relevant, reminding us that Vonnegut still has a lot to say about the modern world. And Wheelhouse Theater's production of Happy Birthday, Wanda June does a brilliant job of honoring his legacy.

As the lights go down we hear animal noises—birds, an elephant, a gorilla. And we hear from Penelope Ryan (Kate MacCluggage) that "This is a simple-minded play about men who enjoy killing, and those who don't." Not everything is as simple as it seems though. And MacCluggage's face is full of subtext as her eyes bug out slightly and we are taken on a journey. Penelope lives with her son Paul (Finn Faulconer) in an apartment decorated with animal prints, heads, and statues. Her husband Harold (Jason O'Connell), a legendary soldier and sport hunter, has been missing, along with his sidekick Colonel Looseleaf Harper (Craig Wesley Divino), since they ventured into the Amazon eight years ago. Since then Penelope has been dating two men: Herb Shuttle (Kareem M. Lucas) and Dr. Norbert Woodly (Matt Harrington).

After Harold and Colonel Harper return home, scenes exploring their adjustments to life after having been gone for so long are mixed with scenes in heaven—where we meet Wanda June (the cute-as-a-button Charlotte Wise), a dead girl killed by an ice cream truck; The Beast of Yugoslavia (Jason O'Connell), a man Harold killed during the war; and even one of Harold's ex-wives (Kate MacCluggage). The common themes become clear—fighting the enemy, whether a neighbor or someone from across the globe; manliness and how men (and women) “should” behave; and how we can progress to a more educated world and speak up for ourselves.

Each member of this cast gives a strong performance. From the moment I spotted MacCluggage forcefully blinking her eyelashes I knew I was in for a treat. Although MacCluggage maintains a buttoned-up, tentative persona, she turns into a strong woman who can stand up to her husband by the end. Lucas brings an interesting twist to Herb Shuttle, playing him as someone not unlike the blithering Lou Costello. Divino embodies a Monty Python-type persona, stepping on the ottoman and squinting his eyes with fantastical energy. And the young Faulconer manages to hold his own among these talented actors.

But the clear stand-out is Jason O'Connell, who embodies Harold Ryan with every fiber of his being. No doubt guided by director Jeff Wise, O'Connell plays this primitive alpha male as the child of Jack Black and Robin Williams. Everything he does is enthralling, even when just observing the space around him. The simplest act, like smelling something, becomes a whole body experience. Indeed, he makes use of every one of his five senses—he licks the bronze lion head mounted on the wall, caresses a door as if he were pleasuring his wife, and listens to silence as if the air has written a joke just for him. Even his grunts and breathing are hilarious, and when he tries multiple times to pronounce the word “experience,” he has not only himself in stitches, but the audience as well.

Scenic designer Brittany Vasta and costume designer Christopher Metzger clearly fed off of each other in interpreting this world. I never realized how many different greens there are—from the jungle-leaf wallpaper to the pale green carpet to the stripes on O'Connell's shirt and the color of MacCluggage's dress. And while these choices show the time period, they also embody this out-of-the-ordinary universe. Everything is strange, yet balanced. The lime green molding at the top of the set, accentuated by Drew Florida's strategically placed, multicolored lights, helps us step out of one reality and into another. There is also Mark Van Hare's amusing sound design, with doorbells that sound like a ferocious lion and a hyena.

Thanks to the skilled work of Wise, his designers, and his stellar cast, we are able to peek into the insane world of Happy Birthday, Wanda June. More than just a play about fighting and killing, it poses questions about following orders—what if we just say no when we are asked to do something we object to? Colonel Harper reminds us about the choices we can make, and the world we could live in, if we just stopped to think about what we are doing. Happy Birthday, Wanda June underscores how we need to cultivate our intelligence and choose wisely; after all, it's people like Wanda June who will inherit the world from us one day, regardless of the shape it's in.

(Happy Birthday, Wanda June plays at Gene Frankel Theatre, 24 Bond Street, through June 2, 2018. The running time is 2 hours 15 minutes with an intermission. The performance schedule varies, with evening performances at 7 and matinees at 2; see genefrankeltheatre.com for details. Tickets are $20 (partial view), $35, $50, and $65 (premium) and are available at genefrankeltheatre.com. For more information visit wheelhouse.theater.)