The Girl with the Alkaline Eyes 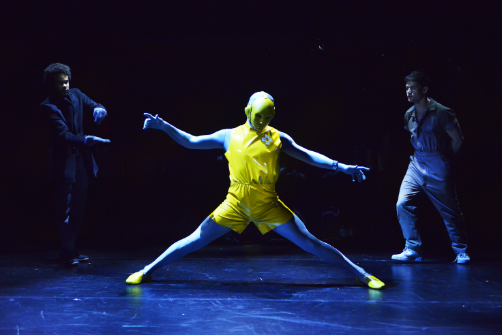 Travante S. Baker, James Koroni and Spencer Ramirez in The Girl with the Alkaline Eyes.
Photo by Michael Kushner Photography.

BOTTOM LINE: A technological dance theater thriller exploring what is possible in a future where humanity is fully integrated with artificial intelligence.

Technology is developing faster than we ever thought possible. With things like Alexa, Google Home, and Siri infiltrating millions of homes across the world, it’s no wonder we often ask ourselves “what’s next”? In The Girl with the Alkaline Eyes, Chase Brock and his company the Chase Brock Experience answer that question and take it one step further: “is this safe?” In this seventy-minute groundbreaking dance theater piece, we explore what really could be possible in the future, a proposed infiltration of artificial intelligence.

Young coder Oliver (Spencer Ramirez) has created a plethora of AI bots, including a secret project Co (Yukiko Kashiki), an amazingly lifelike droid that responds to the world around her with human empathy and feeling. She develops a bit of a relationship with Troy (Travante S. Baker), the person in charge of AI development. After an evening at a club full of eclectic people, Troy returns home to find Co in his apartment. He is lonely, a bit depressed, and finds solace in their relationship, as real (or unreal) as it is.

Troy and Co’s relationship begins to develop, and we find Oliver using virtual reality to create a fictional relationship with Troy through Co’s alkaline eyes. Full of thrilling twists and turns, including a timely moment where an evangelist (Jane Abbot) plants a sign on the back of the Male Creation (James Koroni) that reads “You will not replace us!”, The Girl with the Alkaline Eyes is an engaging and at times heart-racing piece about the integration of artificial intelligence in society, and all the ways it could go wrong.

Chase Brock's choreography is incredibly specific, creating clear patterns for living that need no dialogue or further explanation. The specificity of the dance, mixed with Brock’s theatrical staging and heartfelt storytelling, sweeps you away on this journey. Combined with Eric Dietz’s moving original score, performed live by a trio helmed by Rob Berman, the complexities of emotion and machine are effortlessly mixed to follow the shocking twists this story takes. With movement vocabulary ranging from finger pulses to walking patterns to technical ballet, Brock pulls from his entire tool box to differentiate between humans and robots, and to blur the lines between both.

Ramirez shines as Oliver, wearing virtual reality glasses to program the bots, moving across the space in perfect sync with Dietz’s original staccato score; this evolves to mirroring the movement between the programmer’s hands and the bots, creating beautiful duets in a variety of dimensions. Kashiki steals the show as Co, blending empathy with machine tendencies, creating unsettling moments of compassion while fully manipulating both the humans and robots around her. Baker embodies a struggling CEO, while Abbott, Pickens, and Koroni effortlessly transform to play a slew of diverse characters in this futuristic world.

The Beckett Theatre is fully changed into a new age factory, complete with fleeting “turn off your phone” announcements before the show and an overwhelming smell of plastic. Jason Sherwood's surprisingly mobile set, with a seemingly infinite number of entrances and exits, features three walls of vinyl plastic paneling, used as an effective projection surface by Alex Basco Koch. Brian Tovar’s lighting design is nothing short of brilliant, moving the dancers from scene to scene in a swift and tight way: long shafts of light represent hallways, blue rings show the technology come to life, perfectly timed colored pulses brighten up the club, and gorgeous back light sculpts the dancers as they tell this story. Koch’s projection design blends brilliantly into the story, establishing conventional locations as well as a beautiful representation of coding life into the humanistic droids. Moving from factory to club to apartment, Loren Shaw's costumes are bright and full of detail, fully realizing these characters and their place in this futuristic world.

The Girl with the Alkaline Eyes is a unique dance-theater piece that melds theatrical conventions with dance innovations to create a show with many twists, turns, and technical ideas. A wild ride through the potential world of artificial intelligence, the stunning performances from Kashiki and Ramirez drive home the heartbreak. For dance lovers and theater people alike, this shocking story will resonate with anyone who owns an iPhone. It is not to be missed.