By Dennis Kelly; Directed by Lyndsey Turner
Produced by Audible 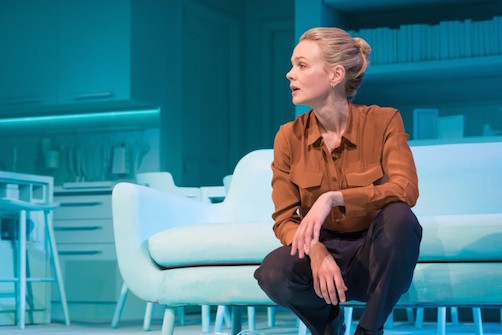 BOTTOM LINE: With the prowess of a standup comedian and conviction of a documentarian, Carey Mulligan drives Girls & Boys as a headstrong woman in a violently gendered reality.

In Girls & Boys, playwright Dennis Kelly creates a slow-burning dichotomy between two timelines, two recreations of reality. Essentially, there is a consistent “A” scene and “B” scene. In the former, Mulligan stands in stark, harsh light within a blue shadowbox. Similar to the frame provided by a TV screen, this sample of Es Devlin’s set design places our singular woman within a clean, categorized frame, within which Mulligan exudes the confidence of a Vegas showman. She is quippy and vibrant in telling the story of her early romance with the father of her children. Her thick estuary dialect colors the story of her passion for documentary film-making and the antique wardrobe aficionado she fell in love with.

The set then shifts to introduce the play’s “B” scene. The back wall of this rectangular frame falls away to reveal a whitewashed modern apartment. Amidst the monochromatic room are pops of color: the pink of a baby bottle, the red of a toy tricycle; these are the flickers of memory. With expert object work as directed by Joseph Alford, Mulligan mimes her children Danny and LeAnne into existence. We now see our sole character as an exhausted mother, cleaning up the food that baby Danny has flung from his highchair, and bargaining with LeAnne to leave a bucket of mud outside the house.

As this directorial and scenic design triumph continues, we see these two relationships between girls and boys unfold. There is the failing marriage between the Woman and her husband, and the tensions that rise between their daughter and son. As the Woman excels in her documentary film-making career, her husband’s jealousy grows. As LeAnne shows bright promise and plays games like “architect,” her brother Danny breaks her toys and pummels his mother with Nerf guns. This raises the question: you teach your child not to bring a bucket of mud into the house, so why would you allow them to bring a gun?

Here, Girls & Boys creates a well-wrought dialogue on taught violence, and the over-saturated normalization of violence which young children digest. Although Kelly’s script draws on a severe cause-and-effect hypothesis, the throughline of losing, denying, and exerting control remains true, and the fundamental issues within our taught gender roles show through like a festering sore.

Stunning direction by Lyndsey Turner creates a subtle reality that makes the violent drama easier to stomach. By switching between these “A” and “B” scenes, Kelly and Turner set up the play like a documentary film, with the latter's alternating between talking heads and dramatic recreation. Mulligan’s character also continuously identifies that she speaks in “a lot of facts.” One fact particularly helpful to take away is that, more often than not, people do not simply snap—they plan.

(Girls & Boys plays at the Minetta Lane Theatre, 18 Minetta Lane, through July 22, 2018. Running time is 1 hour 45 minutes with no intermission. Performances are Tuesdays at 8; Wednesdays at 2 and 8; Thursdays and Fridays at 8; Saturdays at 2 and 8; and Sundays at 3. Tickets range from $57 - $127 and are available at ticketmaster.com or by calling 800-982-2787. For more information visit girlsandboystheplay.com.)

The cast is Carey Mulligan.