Gettin' the Band Back Together

Music and Lyrics by Mark Allen; Book by Ken Davenport & The Grundleshotz; Directed by John Rando 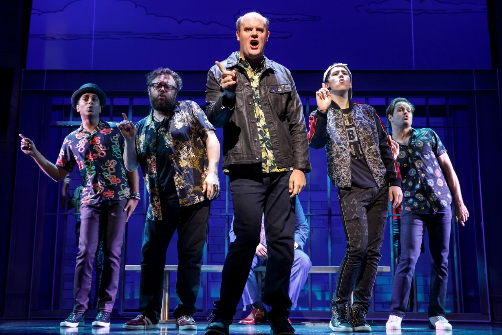 BOTTOM LINE: You can rock out with the energetic cast of Gettin' The Band Back Together, but don't look for anything deeper in this derivative musical about a bunch of 40-somethings chasing their teenage dreams.

Last week, Sayreville, New Jersey became the first entire town to be named co-producer of a Broadway musical when Gettin’ The Band Back Together’s book writer and lead producer Ken Davenport granted that suburb the title. A week earlier, Davenport posted a call on Facebook looking for famous rock musicians seeking cameos (a gentlemen introduced as “Jay from Black Star” was called up to play the cowbell in the finale at the performance I attended). But of all the publicity stunts, the most ridiculous has to be the claim that Davenport made in his pre-show curtain speech (in which he regaled the audience with tales of his own high school band escapades) that Gettin’ The Band Back Together is “a totally original musical.”

No, this musical isn’t explicitly based on any books or movies, but it’s still one of the least original works I’ve encountered. Almost every aspect of Gettin’ The Band Back Together feels familiar. There’s impressive self-delusion in the idea that this show, about a pink-slipped stockbroker in mid-life crisis who goes back home to relieve his high school glory days, has something new to say. As far as recent musical theater, this show is a little bit Rock of Ages and a whole lot of The Wedding Singer. Heck, it’s not even the only currently running Broadway musical that ends with a Battle of the Bands (and the outcome of this hardly suspenseful competition matches School of Rock’s too).

But what Gettin’ The Band Back Together, originally devised through improv by a group of performers and writers called The Grundleshotz, misses out on in terms of inventiveness, it begins to make up with John Rando’s more-than-proficient, often clever direction and the cast’s high-octane commitment to energizing, if not fully fleshing out, the cardboard cutout characters.

Mitch Papadopoulos (Mitchell Jarvis, blandly pleasant with a Brian D’Arcy James vibrato) loses his cushy Wall Street job (“I watched the Dow climb/Then I felt it ricochet,” he croons) so he moves back home to Sayreville to find that pretty much nothing’s changed and the members of his high school band Juggernaut remain single and unfulfilled. (I’m not sure if the denizens of Sayreville had fully studied the largely unflattering portrayal of their hometown when they accepted the co-producing credit.) Bad boy Tygen (Brandon Williams, whose over-the-top hamminess pays off in delivering a much needed dose of self-awareness) threatens foreclosure on Mitch’s family home, seemingly just because he wants to force a rematch of a Battle of the Bands that Juggernaut won twenty years earlier. With the house on the line, there are no options left but gettin’ the band back together.

On bass, there’s Bart Vickers (Jay Klaitz, a Jack Black in School of Rock type and one of The Grundleshotz), the stoned high school math teacher who has the hots for Mitch’s widowed mom (Taxi’s Marilu Henner). On drums is Sully Sullivan (Paul Whitty), the unhappy cop who wants to get out of the family business and head for Broadway. And on keys is Rummesh “Robbie” Patel (Manu Narayan), the Indian dermatologist gearing up for (you’ll never guess!) his arranged marriage. And R.I.P. to the band’s guitarist: the fact that the show plays the revelation of a childhood’s friend’s early demise entirely for laughs indicates how little the creators care about making these characters human, let alone sympathetic.

Since they’re one man down, an uninspired audition sequence leads to Bart recruiting one of his math students, Ricky Bling (Sawyer Nunes), as the new guitarist. Luckily, Ricky Bling can hella shred, man (Ricky Bling’s dialogue sounds just like a 40-year-old’s idea of how a Generation Z kid would talk), and he’s just Jewish enough to improvise a ridiculous (albeit amusing) “Hava Nagila” rap at the Orthodox wedding where Juggernaut inadvertently plays their first reunion gig. That’s pretty much the whole plot, except for a bizarre deus ex machina involving Aerosmith’s Joe Perry.

None of the cast has much to work with, but Nunes, an actual teenager, triumphs most commandingly over the sloppy writing, infusing it with some genuine youthful spunk. The older band members all rock out with good-natured gusto, Klaitz and Whitty especially, but there’s not enough specificity beyond the droopy stereotypes (Bart’s overweight! Robbie’s Indian!) for anyone to make a sustained impression. We also don't see much rehearsing so it's not clear if Juggernaut is actually any good. Do the guys care about their music, or just about having women continue to throw underwear at them (another "original" image—here presented in flashback). Have any of these guys even picked up their instruments in the intermittent years?

Davenport and Co. reduce all of the women to literal groupies by show’s end, but there’s strong singing and an unusually nuanced performance from Kelli Barrett as Mitch’s high school sweetheart Dani, a single mom who dreams of opening her own fitness studio. Tamika Lawrence also stands out vocally as Sully’s fellow cop and eventual love interest. Marilu Henner, the show’s biggest name, has little to do onstage, but fulfills her "mom" duties by serving Rice Krispies Treats to the audience during the intermission.

A few relentless earworms pop up amongst Mark Allen’s undistinguished songs, including the head-banging title number and the opening ode to the Garden State (“In Jersey! Hell yeah!” goes the chorus). The book, by Davenport and The Grundleshotz, veers between very silly and very lame (when Mitch reminds Tygen that his last name is Papadopolous, not “Popalottapimples,” Tygen responds, “I don’t speak Spanish”), but some of the more free-associative moments retain some sense of the spontaneous inspiration of the show's improv origins. The endless jokes about the protagonists being too aged to be in a rock band, however, get plenty old pretty fast.

Gettin' the Band Back Together feels like a small show in a big space, but Chris Bailey’s snappy choreography and Derek McLane’s cartoonish set take ownership of the stage. The vocal arrangements, by Sonny Paladino and Allen, pack a ferocious punch: the hard-working ensemble sounds consistently excellent. And director Rando (Urinetown) coaxes some clever goofiness out of the script in his rather wry staging, best in some meta-theatrical moments that suggest this show could be a whole lot sharper if it fully embraced its parodic impulses.

Despite the up-to-the-minute allusions—obtaining tickets to Springsteen on Broadway becomes a significant plot point and Dani’s teenaged daughter (Noa Solorio, underused) wears a Melania-referencing jacket with the words “I really do care”—this show feels more a product of the creators’ era of adolescence than of our own time. It’s hard to fully embrace the careless, carefree fun of the show’s final scenes what with all the unabashed fat-shaming and woman-ogling along the way.

In its thumping bass lines and New Jersey joshing, Gettin’ The Band Back Together tries its best to take us back to the good old days. If only it felt a little less old and a little more good.

(Gettin' the Band Back Together plays at the Belasco Theatre, 111 West 44th Street, in an open-ended run. The running time is 2 hours 25 minutes with an intermission. Performances are Mondays at 8; Tuesdays and Thursdays at 7; Fridays at 8; Saturdays at 2 and 8; and Sundays at 2:30 and 7:30. Tickets are $39-$149 and are available at telecharge.com or by calling 212-239-6200. For more information visit gettinthebandbacktogether.com.)