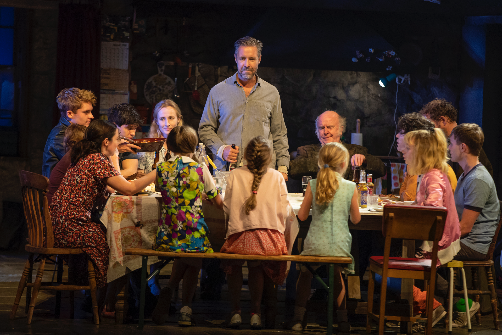 Paddy Considine (center, standing) and the ensemble of The Ferryman. Photo by Joan Marcus.

BOTTOM LINE: A shattering masterwork, Jez Butterworth's The Ferryman has landed at last on this side of the Atlantic. Grab your ticket now (and then see it again).

At The Ferryman’s most joyous peak, the enormous Carney family clears away the tables and breaks into an exuberant traditional Irish dance. The dance, spiritedly choreographed by Scarlett Mackmin, is charming on its own terms, but it is how it unfolds—who dances with whom, who stands to the side, the smiles and raised eyebrows exchanged as the family spins through the dining room—that indicate the densely detailed, deeply human storytelling in which director Sam Mendes is interested. Details abound in The Ferryman, from the children’s artwork and photographs papering the walls of Rob Howell’s expansive, impressive set to the gasp-inducing appearances of live rabbits, geese, and babies onstage.

Jez Butterworth, best known for the 2011 Tony-winning play Jerusalem, has created in The Ferryman an astonishing work about storytelling—stories that have no moral, stories that repeat, stories that never come to a clear ending, stories with no hero. All of those categories could apply to The Ferryman, a sprawling three-act work that ultimately spins on the choices of patriarch Quinn Carney (the fantastic Paddy Considine): the instincts he follows and those he overcomes. At first, it seems that Quinn Carney is a man torn between protecting his family and fighting for a free Ireland. That’s a story that’s pretty straightforward to digest. But as the play hurtles forward through the mere two days that it epically spans, it becomes evident that there are other, more restless, driving factors here: a desire for vengeance, an unspoken lust, and a decade-long battle to escape a shadowy past.

Since it’s a play that focuses on the way that stories are told—as in the way characters explicitly dissect the storytelling styles of Aunt Maggie Far Away (Fionnula Flanagan, wonderful), the usually-mute woman in a wheelchair who drifts in and out of reality, or of Uncle Pat (the charming Mark Lambert), who can’t stop retelling the story of his first harvest—I hesitate to give too many plot details away. It’s not that the story in itself is particularly surprising—part of the play’s sturdiness comes from the sense that Butterworth draws from, and imaginatively builds upon, surefire tropes from Shakespeare, Steinbeck, and Chekhov. (He's also, it should be noted, very funny, too.)

But the way that Butterworth, as the play’s chief storyteller, partners with his invented storytellers within the play to unfold and separate the shrouded layers of truth and myth merits withholding as much of the story as possible. In one of the play’s best moments, cranky Aunt Pat (the wickedly delightful Dearbhla Molloy) wonders aloud, “Now can you imagine walking in here and misreading the situation so completely?” She’s referring to the play’s sneakiest reveal, and the line earns both a big laugh and a few gasps from those audience members late to catching on.

Here’s what I will tell you: set in the rural Country Armagh in 1981 Northern Ireland, The Ferryman revolves around the over-brimming Carney clan, headed by Quinn and haunted by Quinn’s long-vanished brother Seamus. For the last ten years, the Carneys have lived with the unbearable uncertainty of Seamus’ absence, but the play’s opening delivers cold, hard evidence at last that Seamus died at the hands of the Irish Republican Army, against whom he may or may not have been an informer. When IRA bigwig Muldoon (the menacing Stuart Graham) shows up at the Carney farm just in time for the harvest feast, the family’s long-simmering tensions—both past and present, personal and political—churn to the surface.

When I first saw The Ferryman in its original West End production, I found it devastating and entrancing but hard work, both to unravel the patchwork plot and to fill in the large gaps in my knowledge of the Northern Irish Troubles (the play takes place against the backdrop of the 1981 hunger strikes, which hit close to home for several of the Carneys’ more anti-English, Republican (the Irish kind, of course) members). Seeing The Ferryman a second time reveals its monumentality in a new light.

Not only does the play shimmer with repeated viewing, but many of the performances, almost all of them from the West End production, have grown even more persuasive. Laura Donnelly, who won an Olivier Award for the role of Caitlin Carney, and whose own uncle’s disappearance inspired Butterworth to write this work, breathes astonishingly complex life into a richly written role. There’s fresh in-between, contradictory shades of barren joy and wistful hopelessness from Considine, although Quinn’s painted in somewhat broader brushstrokes, more actions than words, than most of his kinfolk.

There is another standout performance from Fra Fee as one of Quinn’s teenaged sons: Fee allows his character to come into startling focus when the jokester jerk confronts questions of real morality and mortality in conversation with his IRA-affiliated cousins, the three Corcoran boys (the excellent Tom Glynn-Carney and Conor MacNeill, along with the very wry, very young Michael Quinton McArthur). Although the IRA baddies are fairly one-note, it’s impressive how Butterworth manages convincingly to condemn cruelty but defend the fight for Irish justice and freedom.

It’s tricky to find the right adjectives to describe Butterworth’s characters or the performances that Mendes coaxes from his actors— Oisin, for example, is quiet and angry, yes, but there are also moments when he’s smiling and drinking with his cousins, seemingly comfortable and eager to embrace the family’s welcome. In one such riveting act of deeply human contradiction, Mary turns on the radio, allowing the music to enter her as her body relaxes and she sighs, seemingly with relief; then she instantly turns the radio off again.

What people want, and what is truly satisfying, is more elusive, more ephemeral and knotty, than most plays give their characters credit for, and that’s just the sort of volatile humanity that Butterworth and Mendes so doggedly and successfully pursue. So see it, and then try to go again. Like the very best dramas—I was thinking quite a lot this time around of King Lear—The Ferryman’s rippling thrills deepen with repeat viewing: the inevitability of the play’s harrowing final moments newly illuminate Butterworth’s meticulous but unstrained construction of each brick in this formidable fortress of a play.

(The Ferryman plays at Bernard B. Jacobs Theatre, 242 West 45th Street, in an open run. The running time is 3 hours 15 minutes, with one intermission and a short pause. Performances are Tuesdays at 7, Wednesdays at 1 and 7:30, Thursdays and Fridays at 7, Saturdays at 1 and 7:30, and Sundays at 3. Tickets are $59-$175 and are available at telecharge.com or by calling 212-239-6200. For more information visit theferrymanbroadway.com.)