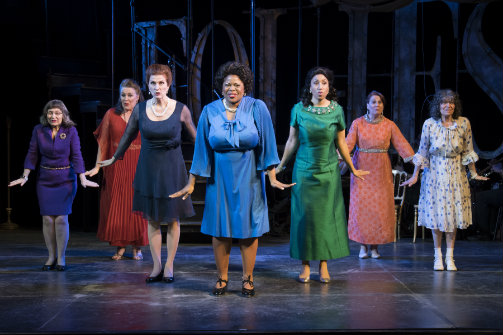 BOTTOM LINE: In one of Sondheim's classic musicals, aging ex-performers reunite to say farewell to a theater they danced in many years before.

For those unfamiliar, Follies is about the aging alumni of the fictional Weissman Follies (think The Ziegfield Follies), who all reunite to pay homage to the theater they performed in many years ago, on the night before it is to be torn down. Some have dragged their spouses along, and not everyone is exited to be there. But Sally Durant Plummer (Tina Stafford) certainly is. Much to the dismay of her husband Buddy (Greg Horton), Sally hopes to rekindle the spark with Ben (Bruce Sabath), the husband of her old friend (and fellow chorus line member) Phyllis (Marcie Henderson). Alongside this quartet are the ghosts of their younger selves. The interactions of Young Sally (Andrea Dotto), Young Phyllis (Tia DeShazor), Young Ben (Ben Northrup), and Young Buddy (Spencer Hansen) provide glimpses into what life was like when their world seemed fresh and new.

Though this story drives the plot, each of the supporting characters in this large cast has a moment in the spotlight as they perform old routines from back in the day. Christine Donnelly brings a wide frankness to Hattie's "Broadway Baby," with a brassiness that shows the drive with which Hattie lived her life. Donnelly shows how reminiscing does not always have to be a longing for the past, but instead an appreciation of one's own choices.

The duet "One More Kiss" displays another smart choice, and is a perfect example of how less is more when representing this contract of time periods. Dressed in elegant beaded outfits, one in white and the other in black, the two Heidis (Susan Cohen DeStefano plays present-day Heidi, Denali Bennett the younger one) tell an entire story of emotion in a matter of minutes. Each is statuesque and strong, yet forlorn and yearning to connect. Director Bondarin makes sure to use the grandiose staircase here, and watching Young Heidi, with a slightly far-off gaze, descend to her older self melted my heart. Yet while the melancholy that comes from reminiscing is highlighted with ballads, the cobwebs are dusted off time and time again as the amazing band picks up the tempo, and set designer Ann Beyersdorfer's fantastic larger-than-life F-O-L-L-I-E-S letters light up, giving the stage and story a beautiful way to come to life.

Much of the success of this revival is due to the performers, who all make the effort to explore the full dimensions of their characters. And they're all super talented—each time I thought I had seen the night's showstopper, other cast members would elevate the show to a whole new level. Perhaps we can attribute these inspired performances to the seasoned actors—unlike so much of indie theatre, this cast isn't just people in their twenties and thirties, and it's the (relatively) older cast members who truly carry the show. Two of the standouts are Marcie Henderson's rendition of “The Story of Lucy and Jessie” and Greg Horton's “Buddy's Blues.” They blew my socks off.

One critique is the sound—while there are certainly valid reasons to limit the use of microphones, more of them might have been useful here. This cast is doing such fantastic work, but we can't enjoy everything they bring to the table if we can't hear them. But with a large staircase as a focal point, and a chorus of showgirls, the audiences of APAC's Follies get to see a different type of musical than much of what we see today. It's a terrific tribute to an earlier period in theatre history. I certainly look forward to following APAC to its new home (soon to be announced) next season.

(Follies plays at the Good Shepherd United Methodist Church, 30-44 Crescent Street (Astoria), through May 26, 2018. The running time is 2 hours 30 minutes with an intermission. Performances are Thursdays and Fridays at 8; Saturdays at 2 and 8. Tickets are $18 and are available at apacny.org.)