Off Off Broadway, Play
Extended through 3.4.18
The Flea Theater, 20 Thomas Street 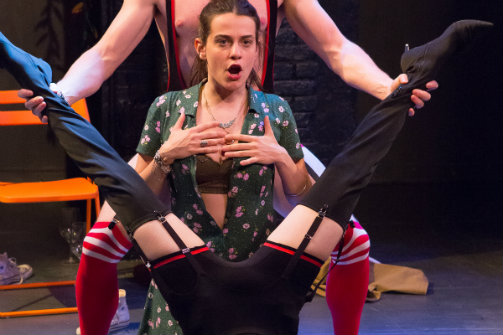 BOTTOM LINE: This vibrant, explosive investigation into life after a breakup could have used a bit more fleshing-out, but what it lacks in world-building is made up in rapid-fire dialogue.

Breakups suck, no matter what. If you date in New York City, you know the drill: break-ups are as ubiquitous as delayed trains. But when hindsight is 20/20, a breakup tends to make for a much better story after the fact when compared to the tragic reality of the present. Steph Del Rosso's Fill Fill Fill Fill Fill Fill Fill (or Fill7, for the sake of my sanity) tells the story of Joni (Sarah Chalfie), who is feeling “holes” in her body after her breakup. She had “oriented her life" around her ex, believing “that’s what a relationship is!” Joni’s journey to piecing herself back together post-breakup involves putting herself out there (how many times have you heard that one?), taking part in threesomes with creepily passionate couples, and engaging in mortifying displays of public self-validation. Joni’s journey is arduous and frustrating, and we’ve most likely all been there. Del Rosso has created a surrealistic dream world for post-breakup Joni that is wild and vibrant. That in and of itself makes Fill7 enjoyable, but the holes in the sociopolitical world of privileged Joni are far larger than the hole growing in her kneecap.

Del Rosso’s racing, witty dialogue, combined with Marina McClure’s expert direction—with genius staging that really is like choreography—encapsulates the dream world of Joni’s breakup. The world of Fill7 is buoyant and thrilling, although it is a little difficult to pinpoint where Joni’s real world ends, and where the real world influences her dream (nightmare?) world. There are elements of Joni’s real life that could be more fleshed out, but Del Rosso clearly wants us to feel untethered throughout the entire experience. So while the two-dimensional nature of the characters is unsatisfying, it is part of the stylized effect that Del Rosso is playing with. When Joni has trouble remembering who she is, she grounds herself through the recollection of her greatest happiness, when everything made sense—performing in her school musical, Annie. Chalfie brings a relatable bubbling anxiety to Joni, who begins the play as a shell of a woman. While this is obviously a purposeful choice, it is a little disheartening to sit through Joni’s reclamation of herself in the context of a man.

Fill7’s surrealism is made possible by an epic lighting design by Reza Behjat, and a vibrant and intense sound design by Ben Vigus, which is sometimes a bit too loud, drowning out some of the dialogue. You-Shin Chen's utilitarian, simple set is wonderfully exciting with small details. A framed piece of plexiglass serves as both target practice and a site for Joni’s contest-winning photography; and set pieces like it fold out with abrupt movements to highlight the jerking-around one feels after a relationship’s end. Superb members of The Bats, The Flea’s resident acting company, execute Fill7’s hyper-stylized dialogue with perfection. The two other female performers, Valeria A. Avina and Monique St. Cyr, are outstanding. Both these women of color prop Joni up and serve as a sounding board for her issues; certainly, the optics on that dynamic aren’t super palatable. But I’m glad their characters (they both play many) are fleshed out and extremely interesting. And I hope if Fill7 has a life outside of The Flea (it should—it’s a well-written piece), future iterations play with some gender bending/fluidity in the casting. Joni’s dream world deserves it.

There is still much to be desired in the understanding of Joni’s real world, for her dream world is stylized to shock and entertain more than enrich. But if you love brilliantly staged, uproarious comedies with snappy, witty dialogue, Fill7 has a place in the canon of witty relationship investigations. Catch Fill7 until February 25, perhaps as a substitute for Valentines Day, if you hope to fill the gaping holes your dumb ex left behind. Metaphorically speaking.