Fabulation, or The Re-Education of Undine 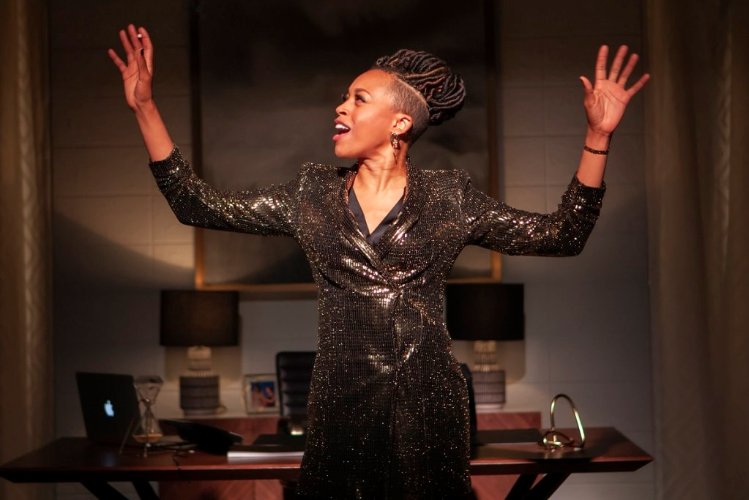 Cherise Boothe in Fabulation, or The Re-Education of Undine. Photo by Monique Carboni.

BOTTOM LINE: A modern day Undine is thrust out of her Perrier lifestyle and back into her native Brooklyn backwaters.

Undine Barnes Calles (Cherise Boothe) thrives as a ruthless PR executive catering to a niche market of newly wealthy Black clients. Between moments of berating her effervescent assistant (Mayaa Boateng) and organizing charity events, Undine weeps uncontrollably. The reason for her sorrow becomes apparent as her accountant announces that her husband has absconded with all of her money. The newly bankrupt Undine is banished from the elite social circles of Manhattan and forced back into the working class streets of Brooklyn. Although Undine wants to plot her comeback, her unexpected pregnancy weighs down her ability to navigate the frustrating world of public assistance bureaucracy.

The literary term fabulation describes writers who have transcended traditional literary styles through the experimentation of form, sequence, and realism. And indeed, the Pulitzer Prize-winning playwright Lynn Nottage fully embodies this term in the revival of her 2004 play. Fabulation is a satire and social commentary on the concept of upward mobility by erasure of the past. As such, it veers from the farcical and absurd and into some deeply painful truths.

Undine frequently breaks the fourth wall, addressing the audience directly with her trademark faux-British accent, complete with arrogance and condescension. Although this effect can feel jarring, especially as it constantly interrupts the flow of the play, it’s effective in portraying just how different Undine is from the person she once was, which is why a re-education is in order. The most authentic and moving characters are not from the world she aspired to belong to, but from the world she has left behind. Nikiya Mathis is the scene-stealing inmate who contradicts all of Undine’s assumptions. Undine’s brother, played by the talented Marcus Callender, struggles after his tour in Iraq but shines in a way that brings the play to its knees.

Although the circumstances of Undine’s life are tragic, Nottage allows Undine to aspire to something great, perhaps not in the superficial world she used to claim, but in the natural world to which she has always belonged.