The Evolution of Mann 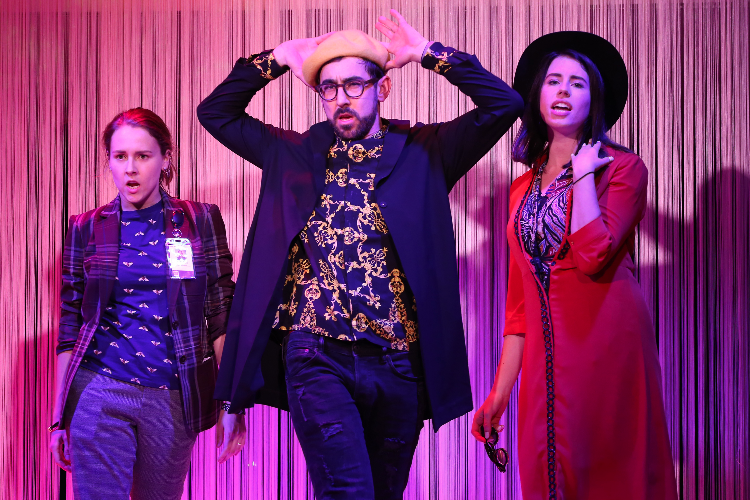 Off Broadway musical romantic comedies are pretty rare these days, so whenever one comes along, I want it to feed that part of my soul that just wants to believe in love. The Evolution of Mann doesn't exactly do that and won't stay in my heart for the long run, but it does provide a pleasant enough escape for 90 minutes, especially as performed by the likable cast.

Max Crumm, who you may remember as the winner of the reality casting show Grease: You're The One That I Want!, plays Henry Mann, who after a year of attending 12 weddings in 12 months, gets an invitation to his ex-girlfriend's wedding. Henry narrates the story to the audience, an unnecessary and lazy device, so we learn that he lives with his best friend Gwen (Leslie Hiatt), who just separated from her wife, and that he is determined to bring a date to his ex-girlfriend's wedding. The main candidates, both played by Allie Trimm, are Tamar, whose favorite Beatles song is "Glass Onion," an intriguing quality, and his co-worker Christine, who is obviously a better person. Here's where the musical falters. Tamar and Christine are clichés—the wild promiscuous girl vs. the good girl—and Henry is shallow, which makes it difficult to root for him.

The music is generic and the lyrics aren't much better, but there are some bright spots in the score. "It's Only a First Date" is sweet and relatable, and I'll admit to chuckling at "Hard," in which Henry and Christine slow dance together (you can guess what happens). But where writers Douglas J. Cohen and Dan Elish really succeed is in the hilariously groan-inducing musical that Henry is writing based on The Great Gatsby, the funniest thing in the show. Also to his credit, Elish writes an ending that, while still hopeful, does not go the completely predictable route.

Director Joe Barros uses the small space well, taking advantage of the upstairs and catwalk. Nancy Manocherian's the cell is a not-for-profit dedicated to new works by emerging artists. I enjoyed The Evolution of Mann more than the theater's previous musical Bastard Jones. If the cell keeps improving at this rate, it may produce a truly great original musical soon enough.

(The Evolution of Mann plays at the cell, 338 West 23rd Street, through October 27, 2018. The running time is 90 minutes with no intermission. Performances are Tuesdays through Fridays at 8; Saturdays at 3 and 8; and Sundays at 3. Tickets are $35, $55 reserved seating; $20 student tickets; for tickets and more information visit thecelltheatre.org.)

The cast is Max Crumm, Allie Trimm, and Leslie Hiatt.