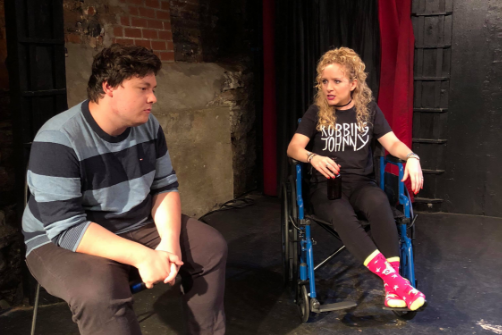 BOTTOM LINE: Those who are most in need may be the ones most likely to have a vision of the divine. This play compassionately tells some of their stories.

Damascus Christophany is a contemporary story of struggling people who find the determination to change their lives. In the New Testament, the successful but destructive Saul is traveling to Damascus when he is blinded by a vision of Jesus. When he can see again, he changes his name to Paul and does good deeds.

In this play, Paul (Stephen Zuccaro) is paying the desperate Dylan (Justin Masters) to help him destroy the pipes in a building on Monroe. The damage will lead to the building's collapse, and subsequent financial reward for Paul and the similarly crooked Kyle (Alex Rafala), who sneaks Paul the keys to the building. Dylan will get $25, which he will use to help his sick mother. The sabotage is planned to occur just as most residents are distracted by preparations for a major snowstorm.

We also meet wheelchair-bound Ellen (Meg Mark), who lives on the sixth floor. Her dear friend David (Andrew Gillespie) hears her stories of dragging herself up the stairs during elevator malfunctions, and worries about her safety. Later, we see Ellen crawl into her room on her hands and knees, collapse into her chair, and experience a nightmare where she is exhorting some unseen entity to leave her alone.

In a bar, Paul bares his soul to Holden (Tim Simon), a stranger who is vague about his land of origin. Holden tells Paul he met Jesus, who appeared to him as a black man. The play opens and closes with monologues by Dylan about people who find superhuman strength to help people in need—a woman who lifts a damaged car to rescue her trapped son, and then the divine inspiration that led Dylan to rush into a certain burning building to save a disabled person.

Under Jake Shore's direction, each member of the cast delivers a nuanced performance. No character is drawn as completely full of contradiction. Shore wants to show us that people’s actions may stem from necessity; changing such people’s circumstances or attitudes would presumably bring them closer to inner peace, grace, or whatever one calls it. It is therefore comforting to think that a life of crime or an isolating disability is no obstacle to a peaceful, useful life. The vision of the black deity of Jesus, while cryptic, also calls to mind a world of justice.

(Damascus Christophany played at UNDER St. Marks, 94 St. Marks Place, through August 25, 2018. The running time was 70 minutes with no intermission. Performances were Saturdays at 2. Tickets were $15, and were available at horsetrade.info.)