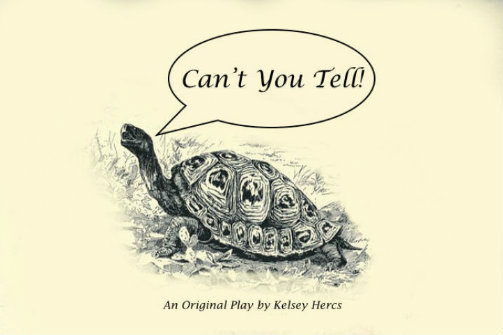 The characters in Kelsey Hercs’ Can’t You Tell! are confronted with some very deep and personal issues. Over the course of the play, they ponder questions of race, class, sexuality, and artistic identity, and before the curtain falls (metaphorically—there is no curtain at the Kraine Theatre), more than one of them will definitely be asked to check their privilege. What makes this interesting instead of tiresome is the fact that the action is set in 1924, long before the concept of “checking one’s privilege” was mainstream.

Can’t You Tell! combines the elements that make the 1920s so irresistible to writers and audiences—fashion, witticisms, and debauchery—with a 21st-century worldview. It takes place at the Harlem apartment of a poor but talented painter, William Knightly (Jason Knox), who is pining for a rising film star who has recently jilted him. His old art school chum, Eliza (Palmyra Mattner), comes by to cheer him up, bringing along her writer husband, Silas (Drew DeSimone) and their “protégé,” Dominic (Tucker Aust), a singer. So far, it all sounds like an F. Scott Fitzgerald story, right? One crucial difference is that William is black and that Eliza, Silas and Dominic are all openly queer. As more friends (and frenemies) arrive and more drinks are consumed, the mood changes from festive and affectionate to bitter and angsty, and a strange story about the Galapagos tortoise takes the plot in a very odd (as well as poignant and hilarious) direction.

Directed by Drew Bolander, Can’t You Tell! attempts to cover a lot of ground in just over an hour (though our program notes tell us that what we’re seeing at Frigid is a shortened version). An attractive and beautifully costumed cast handles some of the script’s more awkward moments with skill, verve, and a myriad of European accents. We may not always be clear where we’re going, but it’s never boring getting there. Besides—slow and steady wins the race!

Can't You Tell! is by Kelsey Hercs. Directed by Drew Bolander. Costumes are by Elicia Lord. Stage Manager is Jillian Christensen.