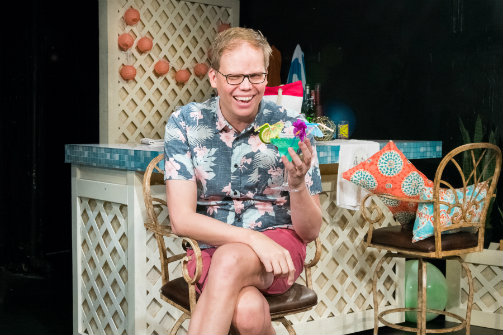 BOTTOM LINE: Cocaine, alcohol, and a personal vendetta against the wording in a wedding invitation fuels this gut-bustingly hilarious solo show about one man’s reflections on life, love, and the pursuit of everything fabulous.

When attending wedding-related events, sometimes your fellow attendees are gracious and overwhelmingly hospitable. Other times you encounter a band of garbage humans, or a Bridezilla from Hell. In the case of Bright Colors And Bold Patterns, a new solo piece by Drew Droege (who also originated the role), you meet cocaine-fueled, anxiety-ridden, highly opinionated Gerry (Jeff Hiller), who seems to desire nothing more than to stir shit up.

Currently playing at the SoHo Playhouse, Bright Colors And Bold Patterns is a theatrical display of comedic genius. Any fan of Droege’s other work (the web series Chloë and Drunk History, and the upcoming TV series Heathers) will instantly recognize his quick wit, less-then-obvious humor, and underlying intelligence, all quietly commanding a seemingly chaotic, over-the-top ship.

The play begins as Gerry enters the back patio of a flamboyant residence in Palm Springs. Dara Wishingrad's lavish set includes everything from the “luxury economy” deck chairs, to the cheesy cabanas, to the tiki-themed bar, transporting us immediately to the sweaty but fabulous gathering place for a group of gay men the night before their friend’s wedding.

Throughout the piece Gerry speaks to this group, who are all hanging around the pool, but not physically present. While in lesser hands this conceit might be less than believable, Hiller interacts with his imaginary scene partners in such a way that I always believed he was speaking to real people. Whether it be moments where he directly addresses someone, or how he responds to what they say back to him, Hiller gives an awe-inspiring display of acting craftsmanship—you can actually see the other people in the universe of Bright Colors. Of course, Hiller’s brilliance is helped by the masterful stage direction of comedy veteran Michael Urie. While the nuances of Hiller's performance are specific to his own personality, the bare bones of his performance have clearly been guided by Urie’s firm and expert handling of comedy in basic human behavior.

While the show begins with what would initially seem to be an insufferable wedding guest (Gerry) who won’t shut up about how the wedding invitation dares to request that no one wear any “bright colors and bold patterns,” it moves in unexpected directions. We learn more about Gerry’s previous connections with the other attendees, and truths that have been long buried come to life. As the piece continues, much of what we assume we know about Gerry proves to be completely wrong—there is much, much more to this alcoholic from small-town Georgia then meets the eye.

Bright Colors And Bold Patterns can best be described as a much funnier (and gayer) version of a NASCAR race: it begins with an immediate flooring of the gas pedal, it wheels by fueled by joke after joke, there is a heart-catching near-accident in the form of poignant character development, and then a checkered flag of a finale that makes you jump to your feet and cheer for the “winner.” While the piece centers around a group of gay men, and there is certainly a lot here on the social constructs of gay relationships both romantic and otherwise, Bright Colors And Bold Patterns also deals with more universal themes. Topics like acceptance, relationship labels, the fear of being alone, life expectations, and the dangers of being too safe all contribute to a satisfying piece that reflects on the human condition in more general terms. There is truly something in Droege’s play for everyone. Oh, but maybe sit this one out if you’re a die-hard fan of Queen Latifah. Just take my word for it…

(Bright Colors And Bold Patterns plays at SoHo Playhouse, 15 Vandam Street, through February 25, 2018. The running time is 80 minutes without an intermission. Performances are Wednesdays at 7:30; Fridays and Saturdays at 9; and Sundays at 7:30. Tickets are $59 - $89 and are available at sohoplayhouse.com. For more information visit brightcolorsandboldpatterns.com.)

The cast is Jeff Hiller.