Music and Lyrics by Joe Iconis; Book by Joe Tracz; Based on the novel by Ned Vizzini; Directed by Stephen Brackett 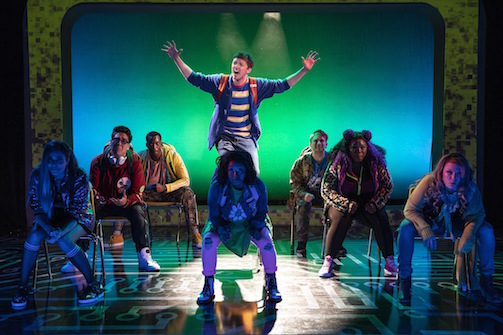 Will Roland and the cast of Be More Chill. Photo by Maria Baranova.

BOTTOM LINE: Be More Chill champions the idea that losers are those who lose friends, and redefines what it means to succeed against all those nagging voices in your head.

Joe Iconis and Joe Tracz’s Be More Chill is set in a familiar suburban New Jersey world, where Jeremy (Will Roland) can’t seem to feel confident in any aspect of his life. A typical teenager, Jeremy has a crush on a girl (Christine (Stephanie Hsu), the star of the school play), and plays video games with his best friend Michael (George Salazar). But then Jeremy decides to pay $600 for a squip: a small, gray pill from Japan that swims through the bloodstream, implants itself in the brain, and provides an unlimited bank of coolness and guidance to “be more chill.” This squip (embodied by Jason Tam) is seemingly ideal for the overwhelming voices and opinions swirling around the mind of an average teen: parental expectations, pressures from a coach, and judgments from a peer. As Jeremy navigates this synthetic addition to his psyche, he faces struggles relating to anxiety, depression, and the confusion of being a teenager in America.

Be More Chill wasn’t on a New York fast-track like its counterpart Dear Evan Hansen. The original 2015 production played for 6 weeks at New Jersey's Two River Theatre, closed (with little hope of moving), and then released a kick-ass cast recording. In an interview for Forbes, Iconis credited the resurgence of interest in Be More Chill to kids and the internet: a relationship that is often scolded, but here helped launch a massive success. Aside from the atypical backstory that allowed Be More Chill to gain traction and commercial demand without any future production dates in sight, the show has undeniably been brewing and festering within audience members’ souls years before previews began. Kids at my performance were cosplaying as Michael, complete with their own homemade red sweatshirts and tees with radioactive green lettering boasting “CREEPS.” This play generates the buzz of a pop concert in the Signature Theatre Center, a space often home to more cerebral fare.

While watching Be More Chill, it is exciting to realize how accessible it will be outside of New York, for so many theatres with varying budgets. The play is designed to represent a diverse cast of actors and utilize straightforward props, costumes, and special effects. High schools across America will likely produce this with great ease, coupled with excitement from the actual high school aged actors who surely already praise this cast of characters.

One of the most striking things about Be More Chill is for all the hype, it feels immediately familiar. No matter how you remember high school (perhaps as a precursor to much better years), it still stands as a relatable playing field. The story is relatively simple, and the characters all make decisions which lead to outcomes that are distinctly good or bad. In this simplicity, those characters who are all just trying to be the best versions of themselves get placed on a pedestal, allowing fans young and old to praise and identify with them.

Be More Chill feels very much like a product of 2018. Watching it I felt pure, uncomplicated joy, an emotion that theatre so often complicates. But at the same time a nagging voice was telling me that this musical isn’t exactly ground-breaking; every scene has been done before, every relationship and love triangle has been explored. But that's ok, because Be More Chill is pure comfort food—it's meant to be consumed hungrily. You walk away feeling proud of each character's journey, and go on to tell all your friends that yes, you got to see that new feel-good musical the young masses have been cultishly lauding. Be More Chill is absolutely fantastic in the same way that a chocolate cake is fantastic. Your mouth waters and your dopamine levels spike with glee, but the cake hasn’t been reinvented—you know exactly what you just consumed.

Yet for all its apparent simplicity, much could be written about its themes, and questions it poses. Iconis and Tracz present a narrative that is crammed full of rich ideologies, classical tropes, fears of Artificial Intelligence, and brat-pack level nostalgia (and hormones!), all masked with the delicious familiarity of a coming-of-age story. And of course, no great musical is complete without a show within a show. While the students rehearse their production of the post-apocalyptic A Midsummer Night’s Scream, their lives parallel the classic play about young lovers creating a mess. To wit Christine, the pursued virgin, and Chloe (Katlyn Carlson), the lusting lover green with jealousy—even the names parallel Hermia and Helena. These tropes, which predate even Elizabethan drama, still shine through in Be More Chill while veiled in modern jargon. You’ll likely leave the theatre with one of your own previous mantras echoing in your brain—or perhaps you’ll have an infectious song stuck in your head every time you enter a bathroom. Regardless, Be More Chill is unassuming and fun; here, that’s enough.

(Be More Chill plays at the Pershing Square Signature Center, 480 West 42nd Street, through September 30, 2018. The running time is 2 hours 20 minutes with an intermission. Performances are Tuesdays through Fridays at 7:30; Saturdays at 2 and 8; and Sundays at 2 and 7:30. Tickets are $65 - $130 and are available at ticketcentral.com or by calling 212-279-4200. The run is currently sold out, but there is a Lottery via TodayTix. For more information visit bemorechillmusical.com.)