Choreography by Zvi Gotheiner, in collaboration with
ZviDance and the Repertory Dance Theater of Utah 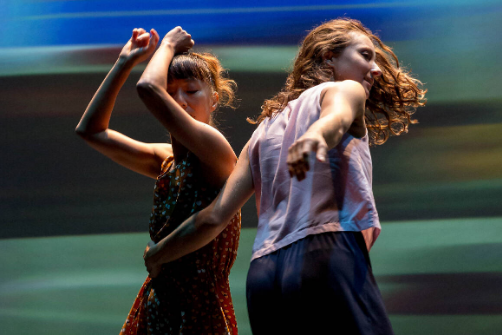 BOTTOM LINE: An evening of two innovative and thought-provoking pieces focusing on humanity’s connection with the world around us.

As the lights go down and the original score begins, ZviDance sweeps the room away. Exploring the rich history of the Bears Ears National Monument, and scrambling through space to an undefined finish line, Zvi Gotheiner and the company of ZviDance pull from diverse backgrounds and their love for melding mediums and styles to create a unique program of two world premiere pieces. Flush with appreciation for the abilities of the human body, both Bears Ears and Detour tell of humanity’s connection with the world around us, whether it be a connection of the natural world or an ingrained need for a final destination.

The idea for Bears Ears began as a partnership between Linda Smith and the Repertory Dance Theater of Utah, and Zvi Gotheiner and ZviDance, as an opportunity to promote healing and conservation of culture and native lands. Bears Ears was established as a national monument in 2016 by President Obama, but over the past two years, the current administration has threatened to remove its designation as protected land. Partnering with three Native American guides, five dancers from ZviDance and eight dancers from Repertory Dance Theater took a five-day journey through Bears Ears listening to the land and improvising movement on the sand. What resulted were two pieces: Dancing the Bear's Ears, which premiered last year in Salt Lake City, and Bears Ears, which receives its world premiere with this performance.

Bears Ears is an enveloping cyclical story of the Bears Ears National Monument, exploring connections to different elements and listening to the history of the earth. Traveling from an initial calling through motifs on drought, water, wind, and land, Bears Ears sweeps us along on a compassionate journey. Exploring the depth of connection between the human experience and the earth, the piece features a series of brilliant ensemble moments fading in and out of duets tearing at the soul as the Bears Ears National Monument is encroached upon and threatened. The original score by Scott Killian blows the wind through your hair, water through your fingertips, and sand through your toes in a series of rhythmic and ethereal tones that encapsulate the heart of Bears Ears.

With the help of Josh Higgason’s inventive video design, which combines hard geometry with beautiful images of the Bears Ears National Monument, and Mark London’s sculpting and seemingly natural lighting design, Bears Ears takes you on a journey of falling in love with your roots, being torn apart from the eyes and heart, and returning to continue the journey and the fight for history. In Mary Jo Mecca's costumes, with a ruched earthy gray reminiscent of windswept stone, the company carries you on a journey through innovative choreography with breath, lush movement, and loose structure. Bears Ears is a thoughtful collection of methodologies, using grounded imagery and rhythmic body sounds while celebrating natural movements in conjunction with the energy of the land.

The second piece is Detour, choreographed by Gotheiner and the company. Exploring the longer, more indirect way to move from here to there, Detour sweeps you along by intuition and passion. With projections reminiscent of hypnosis films and Adolphe Appia designs, Higgason fully realizes the vortex that pulls you away from a destination. Clothed in Mecca’s innocent soft cream costumes, the company flows through space melding together styles and shapes to create an enticing narrative of a lack of direction. Moments highlighting different company members, particularly a passionate solo featuring Jessica Smith, create a series of themes of movement through space while highlighting the cyclical nature of distractions and detours. All of these elements, enhanced by a hypnotic original score by Scott Killian and thoughtful choreography full of lush movement and staccato moments, create a contemporary dissertation on moving through space that is not to be missed.

The world premieres of both Bears Ears and Detour make for a enticing and thought-provoking evening of dance theater. In both pieces Gotheiner and company choreograph, with such detail and care for the ideas they are exploring, through a collection of contemporary styles that is uniquely their own. Higgason's geometric but natural video design, and a combination of soft and angular lighting design from London, create two very distinct worlds, sculpting both the dancers and each narrative in a seamless way. Mecca’s costumes create a freedom for exploration and a taste of something unique for each dancer, highlighting the collaborative creation process of ZviDance. This spectacular program is highly recommended, for dance lovers and philosophers alike.