A Blanket of Dust 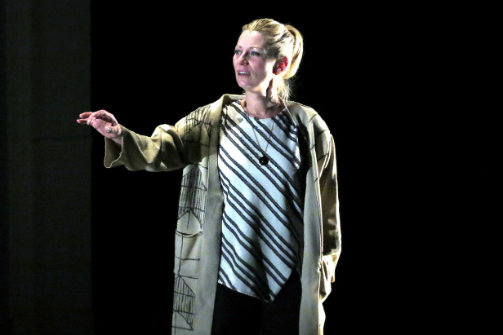 Angela Pierce in A Blanket of Dust. Photo by Sharon Kinsella.

BOTTOM LINE: A thought-provoking examination of our relationship to, and faith in, our leaders and government.

Richard Squires' new play A Blanket of Dust is a modern adaption of the Greek play Antigone, only this time centered around the events of 9/11 and its aftermath. The show opens with Diana (Angela Pierce) on the phone with her husband as she hears he is trapped in one of the towers. After hearing his death and witnessing the destruction herself, we watch as she struggles to deal with her loss, devolving into a world of political intrigue and conspiracy theories surrounding the tragedy. She refuses to stop asking questions about what caused the devastation and what happened to her husband’s body, which brushes her against figures who do not want their authority questioned. A Blanket of Dust thus asks us to query our own precious bubble of privilege and ignorance, and to wonder if what we consider to be facts and reality are merely tools of manipulation by a larger, fear-run state.

A Blanket of Dust has some fantastic minimal design—set by Brendan Boston, lighting by Daisy Long—that is used effectively by director Christopher Murrah as the action jumps from scene to scene and location to location. One moment we are in a family living room, the next we get a quick glimpse into Diana’s psyche, and then onto a political activist stage show. Squires's writing is at times excellent, with some compelling scenes of dialogue, especially those in which two characters speak from the heart. And these scenes are helped by some strong acting. Shout-outs in particular to Pierce, who has to begin the one-act as a helpless bystander to the death of a loved one, and Tommy Schrider as Andrew, who is incredibly expressive and clear in his delivery of certain rhetoric.

Yet the script is also where the show struggles—there is a lack of nuance in character and arguments. While Diana’s quest for the truth is clear, once she believes in the conspiracy theories (that the U.S. government planned or abetted the 9/11 attacks), that side of the argument is told again and again and again. The other side of the argument, the side with the "supposed" facts most audience members think of as the reality of that day, either from first-hand knowledge or media coverage, is constantly delivered by cardboard-cutout villains. Every person who opposes Diana responds with a blustered “how dare you, we are at war!” as if they are obviously obscuring some truth, or they are amoral psychopaths blatantly abusing power for personal gain. Nowhere is there a voice of opposition that tries to present an argument from a place of sincerity, or at least one that isn't outright evil. While I believe Squires intends to show a world ruled by unscrupulous opportunists and profiteers, this gives Diana less to actively fight against, making her struggle less compelling, and ultimately the experience becomes a little dull. While I think A Blanket of Dust raises topical questions for our current political world, it lacks some subtlety, which left me feeling a little spoon-fed.

(A Blanket of Dust plays at The Flea, 20 Thomas Street, through June 30, 2018. Running time is 1 hour 40 minutes with no intermission. Performances are Mondays through Fridays at 7; Saturdays at 2 and 7. Tickets are $20 - $40 ($65 premium) and are available at theflea.org. For additional information visit ablanketofdust.com.)