By Gracie Gardner; Directed by Emma Miller
Produced by The Hearth 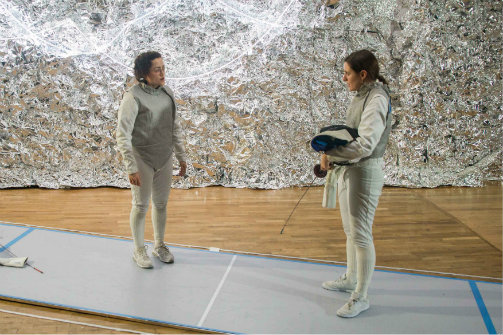 BOTTOM LINE: This taut new play about precocious teen athletes is blessed with an exemplary cast.

There aren’t a lot of bells and whistles in Athena, the new play by Gracie Gardner. They aren’t needed. For most of the 90-minute running time, there are just two characters onstage: Mary Wallace (Abby Awe), an anxious good girl from the Jersey suburbs, and “Athena” (Julia Greer), a brilliant but disaffected Manhattanite who would rather not share her real name. These high school juniors meet at a fencing competition (Athena beats Mary Wallace, then convinces her that they should train together) and, over the next few months, build a relationship that’s half rivalry, half partnership. Thanks to the impressive performances of its core cast, it’s gripping from beginning to end.

Director Emma Miller guides Awe and Greer through a series of brief but meaty scenes that trace the girls’ relationship from strangers to competitors to sort-of friends. Gardner’s script skillfully employs teen drama stereotypes—suburban vs. cosmopolitan, naïve vs. experienced—to first play into, then subvert audience expectations. The world of the play seems both highly specific and deeply relatable: the culture of competitive fencing (with excellent fight choreography provided by Ryan Bourque) isn’t exactly familiar to the general public, but being seventeen years old, testing boundaries, and trying to define oneself certainly is. Miller smartly keeps the action swift and the stage uncluttered, mirroring the energy and focus of her characters (and the actors that play them).

In recent years, we’ve seen more plays by and about young women, but they are still too few and far between. Despite (or because of) the youth of its writer and characters, Athena is a remarkably assured and insightful work. Like a champion fencer, it attacks boldly and cleverly—and may leave you feeling overwhelmed. En garde!

(Athena plays at JACK, 505 1/2 Waverly Avenue in Brooklyn, through March 3, 2018; with an extension March 20-24. The running time is 90 minutes without an intermission. Performances through March 3 are Monday at 8, Wednesday through Saturday at 8, and Sunday at 2. The extension (March 20-24) plays every night at 8. Tickets are $18 - $25 and are available at thehearththeater.com.)

The cast is Abby Awe, Julia Greer, and Eva Ravenal.