Aloha, Aloha, or When I Was Queen 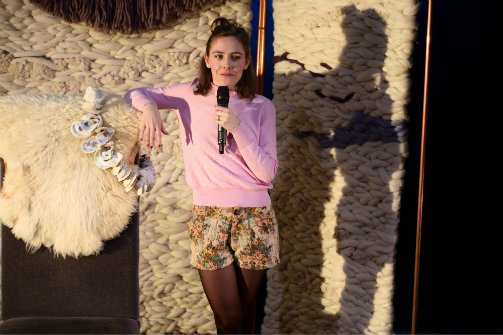 Eliza Bent in Aloha, Aloha, or When I Was Queen. Photo by Knud Adams.

BOTTOM LINE: A smart, funny exploration of cultural appropriation in the tradition of the great solo performers.

“I got my first rejection letter when I was fifteen” says Eliza Bent as she begins her autobiographical deep dive into the world of cultural appropriation. The letter, it turns out, came from PBS, in response to a VHS tape of a school project in which Bent—a white girl from Massachusetts—plays Hawaii’s Queen Liliuokalani. Revisiting this tape, Bent now finds herself mortified. Her past cultural missteps, previously unexamined white privilege, and passion for the messiness of humanity form the basis of Aloha, Aloha, a powerful and fun meditation on American whiteness.

Delving into issues of cultural appropriation, whiteness, and racism is uncomfortable by nature, and Bent deftly dodges some of the common traps white people fall into when discussing race. Aloha, Aloha is not a mea culpa; Bent doesn’t beg forgiveness or demand to be recognized as one of the “good ones.” Analyzing her teenage self’s relationship to the story of Queen Liliuokalani, she describes the legacy of Hawaiian colonialism as “a history we discovered, and in part owned.” The show wrestles with the tendency of whiteness to smother, claim, and overwrite, and Bent offers her audience ample space both to cringe at others’ missteps (by giving them permission to literally call out “cringe”) and critically examine their own. She notes that she didn’t think of her Liliuokalani story in terms of cultural appropriation until recently, testifying to both the rapid social progress and the creeping tendency of our blind spots to help us remain safely in our ignorance.

Bent is honest and incisive, asking questions like “What does it mean to feel like I’m the whitest in the room?” She traces her own relationship with race as a microcosm of the changing attitudes of the past few decades, highlighting both how quickly racial sentiments have changed (and how dismaying some of the choices of just a few years ago look today), and how very much work is left to be done. The show approaches cultural appropriation as a moment of learning, and Bent is an excellent pied piper to follow on the path towards greater awareness. A versatile performer, she here deploys her capacious talent for accents (and her complex thoughts on speaking in the voices of others), cracks jokes about those Brooklyn dinner parties, and sings in at least four languages.

Bent is funny, charming, and deeply sincere, a persona that carries the complexity of the story with humor and compassion, and her sophisticated writing offers the kind of frank hilarity that makes solo performance shine. The narrative is extremely relatable while still being unique, and Bent integrates her childhood stories into her later adventures in journalism and publishing seamlessly. A few moments run a little long, but the story is engaging and Bent’s storytelling is razor sharp, intelligent, and insightful. It’s a joy to be in her presence as she deftly navigates race in America in a way that demonstrates her love for both cultural critic Hilton Als and her conservative family.

Fans of solo performance will certainly be impressed by how Bent frequently nods to its greats in nuanced ways, from Spalding Grey’s intensity and control of beats to Anna Deavere Smith’s documentary character portrayals. It’s also rare in this genre to think about design, but Aloha, Aloha’s production is visually delightful in its simplicity. Kate McGee’s lighting brings a gorgeous, romantic dynamism to the space (and works in the Spalding Grey references nicely) and Elizabeth Chabot’s textile panels are hypnotically textural.

The piece overall demonstrates artfully that (as Bent notes): “It's messy, learning is continual, and if you're lucky you'll get schooled.” Bent asks her audience to consider their own way of taking space, participating in culture, and telling stories. It's a smart, funny, and vital contribution to the ongoing conversation.

(Aloha, Aloha, or When I Was Queen plays at Abrons Arts Center, 466 Grand Street, through April 21, 2018. The running time is 75 minutes with no intermission. Performances are Wednesdays through Saturdays at 8. Tickets are $20 and are available at abronsartscenter.org.)

Aloha, Aloha, or When I Was Queen is written and performed by Eliza Bent. Directed by Knud Adams. Textile Panel Design is by Elizabeth Chabot. Lighting Design is by Kate McGee. Sound Design and Original Music by Jerome Ellis. Makeup and Styling by Naomi Miyoko Raddatz.