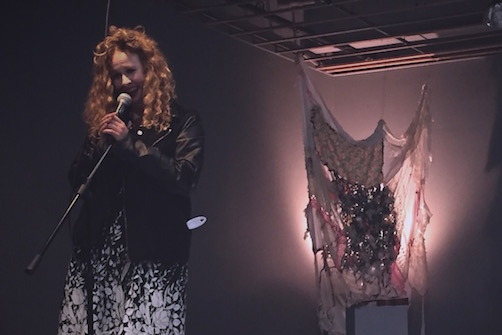 BOTTOM LINE: "The child, mystified by the commonplace, moves into the strange" in Asylos’ Woolgatherers, inspired by Patti Smith.

Asylos presents their third movement-based experimental piece Woolgatherers as the final component of their trilogy based on the writings of Bob Dylan, Sylvia Plath, and Patti Smith. Woolgatherers draws specifically from the work of Patti Smith, inspired by her artistry and based on her poems published in her 1992 book Woolgathering. As an audience member only familiar with Smith’s written work through her novel Just Kids, the fluidity and bohemian spirit of these poetic texts came as a welcome surprise in comparison to her colder rationalizations and memoirs of New York City. In her poems, though, one thing is certain: wool gathering is a means of delving into the strange, destined for change, like spinning wool into yarn.

In the opening moments of the show, the actors take the stage as aetherial bohemians clad in cream capes, miming the spinning of wool into thread with their fingers. Pearl (G.J. Dowding), the flashy yet mysterious narrator for the evening, introduces Bedie (Teresa Braun), Josephine (Virginia Rupert), and the Scientist (Yael Shavitt). Through movement, vignettes, and music performed by the ensemble, they tell the tale of a father and mother pulled apart by different needs and a dying flame after losing their child. Much to my surprise, their child is still alive, but was swept away by a powerful river as an infant. She’s carried by the river for twenty years, only to learn from the river and emerge as the Scientist, enlightened and impassioned.

Through live musical performances led by Virginia Rupert, and eerie video sequences helmed by Teresa Braun, Woolgatherers presents a chance to enjoy the experimental and to relish performers putting so many different mediums on one stage. The piece is indeed a showcase for the creative rather than the traditional narrative mode of storytelling.

Woolgatherers is by Asylos, based on texts and art by Patti Smith, Bob Dylan, and Tom Waits. Directed by G. J. Dowding. Music Direction is by Virginia Rupert. Video Design is by Teresa Braun and Yael Shavitt. Assistant Directed by Graham Shelton. Makeup Design by Dana Mackin.