Wood Calls Out to Wood 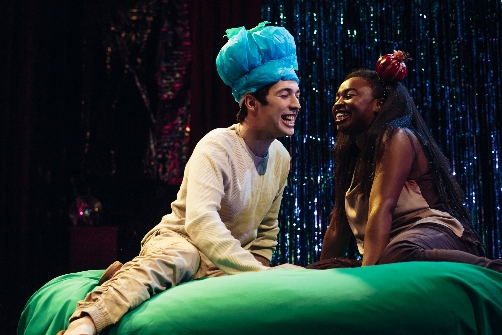 Connor James Sheridan and Tanyamaria McFarlane in Wood Calls Out to Wood. Photo by Sasha Arutyunova.

What do you see when you look at Bosch's The Garden of Earthly Delights? Wherever your glance lands in that impossible world, there is no instruction on how to indulge yourself (as opposed to those paintings that scream “CHECK OUT MY FOCAL POINT.") Layers of grassy meadows are intercepted by cerulean waterways that serpentine their ways into the beyond where there are unicorns and birds the size of elephants, and masses of human bodies wrapped around massive berries. It’s a strange painting that may make you giggle, and then become lost in deep thought.

Not surprisingly, Wood Calls Out to Wood is like that too. You follow the tree. Or rather, she—silent and still, breathing in deep—catches your attention. She speaks of her various incarnations through the centuries. She must’ve started as a sapling in the forest, and eventually, her “ugliest inside” becomes a triptych in the 15th Century. She was painted by Bosch, Hieronymus Bosch, whose name literally means “wood,” and so here it is, wood recalls the creations of wood. The rest of her, the tree, is nowhere to be seen, forgotten, discarded by history. And now, the tree becomes a spirit of the painting that is at once her own life story: complete, final, and an ever-growing, living thing, like those strange creatures in Bosch’s mesmerizing painting, moving and emerging and disappearing with every subtle shift of light and dark.

Soon, it becomes hard to tell whether you are an element in the painting looking out, or an observer attempting to figure out the unraveling mystery. So you follow the tree as she takes you through a corridor filled with layers of textures, and furniture suspended midair. You walk onto the stage as if entering the painting from behind, and then you are a part of this world where single syllables merge into thoughts, enmeshed in a cacophony of ideas where you’re the object of observation.

And then you zoom out and step away, finally with enough distance from the painting to focus on the tiny miracles at work. The creatures from across the landscape come alive. It might remind you of Sondheim's Sunday in the Park with George, but added here is the contemporary sensibility of Toy Story and the whimsy of Calvino’s imaginary cities (the humanoid horses might as well be called names the like of Captain Vhd Vhd).

One of these tiny miracles is a love story between a man with a grape for a head (Connor James Sheridan), and a woman who can translate the mysteries of the world into words (Tanyamaria McFarlane). The scene between Sherican’s Grapehead and McFarlane’s Lover is a sublime combination of existential depth and silliness. Their “courtship” is with words alone, yet it becomes more deliciously intimate than anything physical can possibly achieve. In an orgasmic moment, you witness the metamorphosis from the word “kiss” to “alchemy.” How accurate. And there’s more: as their communication and grasp of knowledge become more sophisticated, the primitive intimacy between them somehow diminishes. “Words become hollow” when there are too many of them to choose from, yet very little to be expressed.

Bosch's strange and delightful painting, with its absence of focal points, is oddly a perfect metaphor of the world: every little incomprehensible, random detail somehow accumulates into order, and even within the most harmonious existence lies endless chaos—the world isn’t beautiful, therefore it is. Likewise, Wood Calls Out to Wood is an ode to the earth, for it imitates our bizarre and incredible spinning world in every way: its capacity to make sense out of every impossible phenomenon, its habit of simultaneously disrupting and mending, and most importantly, its apparent imperfection.

In fact, the play is at ease with its imperfection. It’s not cut out to be a single narrative, but rather a springboard for each audience member to discover their own interpretation. I imagine Bosch discovering the images from the tree's ugly inside, where memories reside. And I imagine playwright Corinne Donly translating the glistening patterns of colors where brushstrokes blend into poems, crafting the play to be a mystery birthed from a single syllable, universally understood by humans and unicorns alike.

(Wood Calls Out to Wood plays at The Tank, 312 West 36th Street, through November 12, 2017. The running time is 50 minutes, no intermission. Performances are Thursdays through Saturdays at 8; and Sundays at 7. Tickets are $15 – $25 and are available at thetanknyc.org.)