What It Takes To Feed A Pterodactyl

Written and Performed by Darrell Shipley; Directed by Padraic Lillis 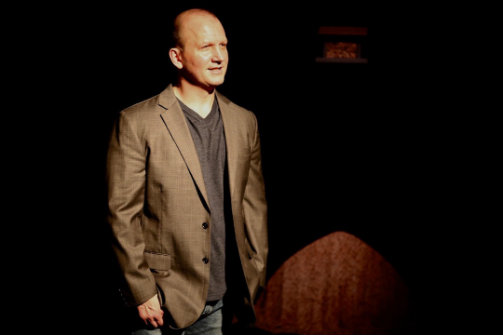 Darrell Shipley in What It Takes To Feed A Pterodactyl.

BOTTOM LINE: Darrell Shipley elegizes his mother lovingly, if not always skillfully, in this solo show.

I should begin by saying that, in the production I saw of What It Takes To Feed A Pterodactyl, subtitled, "Adventures Raising my Aging Parent," I did not see it at its best. The sound and light board operator for the evening was announced to be "stuck on a train in Secaucus" fifteen minutes after the one-hour show was set to begin, so Pterodactyl ran with wash lighting and no sound. Waiting for our man from Jersey gave me a chance to get a good look at the set: a table, a chair, and a bird feeder with a thigh-high, foam-based "pile of birdseed" beneath; the playing space is also ringed with a trail of real birdseed. Spoiler alert: this pile of birdseed is "what it takes to feed a pterodactyl," a concept referenced only in the show's last two lines (so don't bring your dinosaur-loving kiddos or friends).

Darrell Shipley's work as a solo performer was highlighted under the unchanging lights. Shipley appears to be a bit at sea working alone onstage, though he brings a pleasant energy and fills the space. His characterizations of family and friends read like an acting reel, running through accent after implausible accent. Why was Barb Joy, a hospital administrator in Pennsylvania who took pity on Darrell and his indisposed mother more than once, a sweeping Southern Belle? Why was a cruel doctor given an inconsistent, vaguely-Scandinavian accent? Does his former agent really call himself "Balls, because he's a ball-buster"? Perhaps giving each character a distinct accent, trope, or dialect was a way for director Padraic Lillis to nudge Shipley toward more distinct characterizations in his writing and acting, but neither the physicality nor the accents end up as crisp as one might hope.

Sometimes Shipley creates something real, and often where it counts. Shipley grounds his portrayal of his mother firmly in reality, with a light Irish lilt, and one feels that the twinkle he gives her was true to life. His mother's rottweilers, too, though they only appear for a moment, are a delight. A kindly neighbor and a sympathetic caregiver add a bit of humanity. Darrell's brother fits into the story well despite an extreme characterization.

The story itself plugs along consecutively through the many indignities and financial struggles that go along with caring for a sick parent. Although the piece strives for intimacy and poignancy, some of this is sacrificed to comedy bits scattered throughout: male pattern baldness jokes that echo jibes at Colin Mochrie on Whose Line Is It Anyway? along with pat jibes at the audience's intelligence ripped from a stand-up handbook. But Darrell Shipley is charming, especially in his characterizations of his mother at her different stages of life. While comic moments may falter and Shipley's empathy for his smaller characters may fall short, the piece overall is a loving elegy.

(What It Takes To Feed A Pterodactyl plays at the John Desotelle Nubox Theatre, 300 West 43rd Street, 3rd Floor, through April 15, 2017. The running time is 1 hour with no intermission. Performances are Thursdays through Sundays at 7. Tickets are $20 and are available at darrellshipley.com or by calling 816-679-6445.)

What It Takes To Feed A Pterodactyl is written and performed by Darrell Shipley. Directed by Padraic Lillis. Set Design is by Scott Tedmon-Jones. Lighting Design is by Katy Atwell. Stage Manager is Jude Feingold.