Written and Directed by By Julia Jarcho
Produced by minor theater 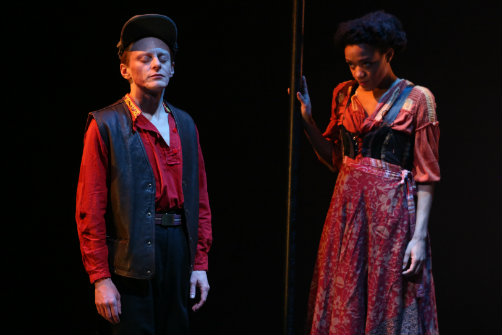 Jess Barbagallo and Kim Gainer in The Terrifying. Photo by Marina McClure.

BOTTOM LINE: minor theater's simultaneously intimate and grand production of The Terrifying brings the horror genre on stage with a tale of the invisible monster.

You're led through a dim, narrow corridor onto the small stage at Abrons Arts Center, where you will sit in anticipation, possibly getting sick with apprehension, because before you there seems to be endless darkness. The atmospheric set, while simple, is telling: the suggestive interior of a 19th-century cellar, complete with wooden stairs, occupying the same space as a set of metal pipes filling the distance between the floor and the ceiling, as though some skeletal trees in a dark forest, or a strange cage. It's a perfect setting for something terrifying.

Loosely based on an unfinished short story by Nikolai Gogol, playwright-director Julia Jarcho's The Terrifying transports its audience to a small village on the cusp of modernization. There's a monster in the story, of course. However, the ravenous beast lurking in the shadows remains unseen as the tale unfolds and it tears the village apart, devouring the residents one after another. You hear its roars and feel the neck-prickling chill; you follow the characters through the wilderness, as the unknown fills the unseen.

The opening is in fact the most chilling part. The central character, Annalise (Kim Gainer), speaks in a prologue: "The logic of the monster was well known. When it devoured you, not only your flesh but your desire would get into its bloodstream, and its next victim would be the one you loved." The complex relations between the villagers become clear as they are connected by violence and lust. The series of horror begin with Raluka's (Hanna Novak) death: her body twists until unmoving between the invisible tusks of the hidden monster. However, the gut-churning horror does not come from the monster's ravenous roars, but from local jailor Cloris' (Pete Simpson) first taste of the girl's blood.

The teenagers are told by their parents and teachers to arm themselves, which turns out still not to be enough: Raymour (Jess Barbagallo), the boy Raluka loved, becomes the second victim, followed by Vosha (Kristine Haruna Lee). Except Vosha isn't killed by the monster. Meanwhile in the town jailor's house, his daughter Annalise takes in a lodger from the city—Nickel (Pete Simpson again), a stranger who comes to the village that is infamous for its grotesque incidents. Nickel "sacks out" in the beet cellar and starts to record the strange occurrences.

In this play, the adult men somehow become the monster's accomplice. They also represent a much more tangible force of violence, something emphasized by Jarcho's choice to have one actor play all three adult men—Cloris, Nickel, and Raymour's father Pewter. Simpson's versatile portrayals of these vastly different (yet in essence selfsame) men reveal the sobering truth that they're all capable of unimaginable evil: the jailor gradually metamorphoses into a monster himself, growing tusks and hooves in place of his human facilities, while the seemingly gentle school teacher Pewter also evidences a much darker side.

Obie-winning designer Ásta Bennie Hostetter's excellent costumes make it easy to distinguish the characters. Barbara Samuels' spectacular lighting and Ben Jalosa Williams' haunting live sound design also add to the production's immersive qualities. The ingenious use of the depth of the space gives the production a cinematic quality; the separation between the audience and the playing space also disappears as the team uses the architecture of the space to their fullest advantage.

The Terrifying also embraces the campy styles in horror films, incorporating aural elements you might remember from classics like Dracula or Nosferatu, in which elements that are supposed to be scary are exaggerated to the point of silliness. And speaking of horror theatre, you can't help but compare the piece to Let The Right One In, to which The Terrifying is similar in its relentless inventiveness. The realm of the dead, in the universe Jarcho creates for The Terrifying, is an abandoned movie theatre where the dearly departed sit and watch the living on a silver screen. The actual audience portion of the theatre becomes the eerie underworld, separated from "reality" by an invisible layer of film screen, where the dead snack on bats as they enjoy the scenes from their past, while gradually transforming into bats themselves.

While a visually stunning and cleverly staged production, there is still room for improvement. The script at times sacrifices clarity for intrigue, and none of the characters seem to have been developed thoroughly enough. The triple-casting of the men is a powerful concept in theory, however, when two characters both played by Simpson interact with each other in the same room, it becomes unnecessarily confusing. The co-existence of camp and horror also seems to make them negate each other: the rapid shifts between styles make it hard to truly get lost in the story. The production's constant acknowledgement of its self-awareness of being a storytelling medium also takes away the transformative experience the story might otherwise bring to the audience.

The play ends with Nickel the journalist back in the city, recalling his experience in the village against an audio backdrop of cacophony, including traffic noise and voices from what sounds like a electoral rally or a rioting mob. This might be Jarcho's attempt at bringing the story into our current reality—the monster thus becomes less flesh-eating beast, more abstract concept—war, famine, racism—capable of doing unimaginable harm. Children and women are the first to get hurt when monsters attack. Annalise says: "I guess there's as many leftover mothers as orphans almost." It's a line that hits home and makes one think of pictures of children's corpses in war-torn countries, or even more recently, the dead Syrian refugee boy in the red shirt who washed ashore in Greece. The moral of story is plain as day—monsters are closer than we think, and the scariest ones are invisible, or they don't seem like monsters at all. The safe "bubble" that is our city is just that, a fragile bubble. And it might be a good idea to stand on guard.

(The Terrifying plays at Abrons Arts Center, 466 Grand Street, through April 2, 2017. The running time is one hour 30 minutes with no intermission. Performances are Thursdays through Saturdays at 8, and Sunday 4/2 at 5. Tickets are $25 and are available at abronsartscenter.org or by calling 212.352.3101.)