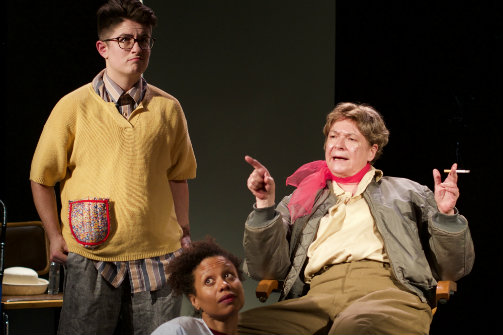 BOTTOM LINE: A journey to acceptance of one’s own mortality, reminiscent of a student party at an arts college.

Tuberculosis is probably the most romanticized disease in European art and literature. "Consumption," as it was once known, was seen as the beautiful decay of intelligent and sensible people, aflame with creative inspiration and sexual desire at the end of their often short lives. Until the advent of chemotherapy and antibiotics in 1944, there was no effective cure for the disease, which caused a lot of speculation and experimentation with diet and environment. In the beginning of the nineteenth century, sanatorium treatment started to become popular among the wealthy. The sick were advised to retreat to the mountains and follow a strict daily routine under the doctor’s supervision.

The Magic Mountain, written by Thomas Mann in 1924, is probably the most iconic novel illustrating life in a tuberculosis sanatorium. T.B. Sheets, written by Adam R. Burnett, draws its inspiration from the German classics (and its title from a Van Morrison song) and creates its own limbo between "the valley" and the sky, life and death. The patients exist in a constant state of transformation. Even their names change as the play progresses. The One Who Composes Sounds and Visions becomes The One Who Keeps Time, and then Saint Definitelynotbluejeans. All of the proper nouns are descriptive of a state or an occupation.

Despite the debatable parallel between tuberculosis and gender fluidity, T.B. Sheets is a reassuring, poetic and occasionally funny play with songs. Entering the sanatorium with The One Who Has Come From The City To Heal (Moira Stone), you might at first find its occupants teetering on the edge of insanity. But as Stone’s character transforms into The One Who Accepts Their Sickness, you may find yourself in love with the whimsical characters, each of whom gets a spotlight in the show.

Unfortunately, as directed by lisa nevada, the collective of patients and staff never truly become an ensemble, and, at times, the entire show seems like a party of art college students. Everybody is preoccupied with their own persona and stars in what they think is a play about them. Eliminating elements to their essence proves to work, as with the scenic design by Nicholas Kostner: in addition to six panels upstage which double as screens for projections by Jeanette Oi-Suk Yew & Masha Tsimring, the sanatorium interior consists of only two chairs and tree chaise lounges with ashtrays glued to them. T.B. Sheets would benefit from some further fine-tuning of the performances.