Tania in the Getaway Van

By Susan Bernfield; Directed by Portia Krieger
Produced by The Pool 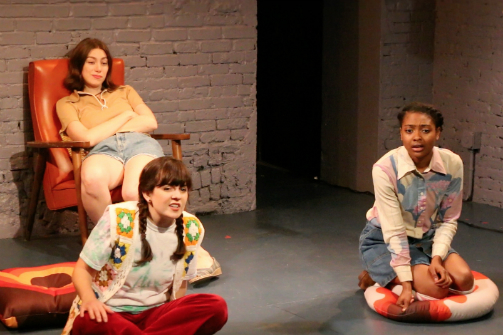 BOTTOM LINE: The Pool, a "pop-up theater company," brings a '70s-flavored feminist play by Susan Bernfield to the Flea.

As the audience assembles in the Flea’s Siggy Theater for Tania in the Getaway Van, 1970s commercials are projected on the upstage wall (the projections design is by David Bengali). Young white women with perfect hair giggle and smile seductively, selling deodorant, Kool-Aid, hosiery and cake mix. News announcements about the kidnapping of Patty Hearst pop up from time to time but get cut off as if somebody is switching channels.

At the age of 19, Patty was kidnapped by the radical left-wing group known as SLA (Symbionese Liberation Army) and, after months spent in captivity being “brainwashed,” turned terrorist herself and changed her name to Tania. Tania is a hero for 11-year-old Laura (Caitlin Morris); it is only in moments of impersonating this famous “Stockholm syndrome” victim that the kid seems vibrant and interested in life. In a tie-dyed T-shirt, braids and a bandana covering her eyes, Laura hides in the closet (where Hearst was allegedly imprisoned), pretending to be the Bay Area publishing heiress.

Laura might not know what “feminism” is, but she has an embodiment of it in front of her, namely her mother, Diane (Annie McNamara). With three kids on her hands at the age of 36, she decides to go back to school and get a job, an ambition unheard of amongst her circle of San Francisco housewives. Restless and sputtering with passion for women's lib, Diane seems unsympathetically neurotic at first. It is tempting to side with the mellow Laura, embarrassed by her mother’s eagerness to get to the core of things and people.

Torn between her role model, Patty/Tania, and the images of women with perfect hair from the TV shows she watches daily, Laura enters puberty confused and unhappy. Her friend Stacey (Courtney G. Williams) seems to take life easier. She rushes to Laura’s house to share the news that her boobs have finally started growing, and views stewardesses as a higher caste of women. The kids’ babysitter Carol (Madeline Wise) also wants to be a stewardess, a dream of which she sings a cappella in a spotlight of her private thoughts. In fact, each girl sings her inner monologue during the show, which enhances its playful and fast-moving dynamic.

A story of women's empowerment, Tania starts strong but falls flat in the second act, which takes place in 2012. Diane, now 73 and a politician, and Laura, a 47-year-old professor at Columbia, sit at a table at an outdoor café in Manhattan, drinking wine and calling each other amazing. Later, Diane’s assistant, Katelyn (Williams again), joins them and they talk, seemingly forever, about the fruits of the women's liberation movement and its effect on their lives.

Both McNamara and Morris give one hundred percent and are convincing as snarky, privileged women. But their dialogue wanders in circles, and confining them to a restaurant table kills the performance’s energy. Casting Williams as both Stacy and Katelyn is a bit confusing; director Portia Krieger doesn't adequately establish the characters as distinct. And Tania, the most important off-stage character, is absent from the second act, leaving us wondering, somewhat like the women onstage, what was the point?

(Tania in the Getaway Van plays at the Flea Theater, 20 Thomas St., through December 16, 2017. The running time is 1 hour and 35 minutes with no intermission. Performance schedule varies. Tickets are $25 and $35 and are available at thepoolplays.org.)

Tania in the Getaway Van is written by Susan Bernfield. Directed by Portia Krieger. Music is by Fan Zhang. Projection Design is by David Bengali.