Off Broadway, Play with Music
Runs through 4.1.17
McGinn/Cazale Theater, 2162 Broadway at 76th Street 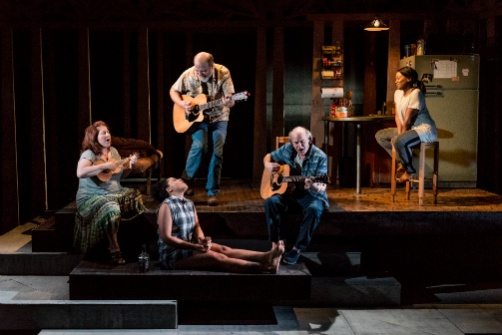 BOTTOM LINE: Sundown, Yellow Moon replays the past with melancholic murkiness, casting shadows onto the family ties that bind. Despite pacing and structural issues, look it up if you’ve got the time.

Ray (Lilli Cooper) and Joey (Eboni Booth) are twins—but don’t get them confused. One likes to run. The other likes to sing. They both, however, want to escape. In Rachel Bonds’ new atmospheric "nighttime play with songs" Sundown, Yellow Moon, Ray and Joey have returned home to their small Southern town to find their father Tom (Peter Friedman) in a moment of crisis. Folks come to life in the darkness of the night, it seems, plagued with insomnia, anxiety, and a general sense of dissatisfaction. Through exchanges that are equal parts funny and sad, Bonds’ Sundown, Yellow Moon sits in this discomfort with bleary eyes. Whether the fuzziness of it all is brought on by lack of sleep or by sentimentality, though, is unclear. With a meandering plot line and slow pacing, Sundown, Yellow Moon is like a beautiful, thoughtful, but ultimately unsatisfying summer evening—one where you go to sleep with a headache, if you sleep at all.

A great sense of worry pervades the show, though untethered from any real urgency it exists more as an amorphous tension and sadness. Characters are driven by worry—for themselves, for others, for their work. Both Ray and Joey face creative slumps, though their anxiety manifests differently. Musical and messy, Ray hasn’t been able to write a song since she quit her job after sleeping with her boss. Academic and cerebral, Joey nervously anticipates her impending trip to Germany for a Fulbright fellowship. They share concerns about their educator father, Tom, suspended from school after a public fight with the principal, who has now withdrawn from society. Tom’s friendly neighbors, Jean (an underutilized Anne L. Nathan) and Bobby (Michael Pemberton, engaging), are also worried for him, which they voice with long-suffering patience. Counselor Carver (a soulful, intense JD Taylor), required to check in periodically, also is invested in the family’s well-being—though as the subject of long-held town gossip, he is in turn someone to be concerned about. As a meditation on what it means to be part of a community, Sundown, Yellow Moon’s portrayals of investment make interesting commentary about the costs of loving other people. However, without much dynamic story evolution, it is unclear just how much the audience shares in this fellowship.

Performances are strong throughout the talented cast, with highlights including Peter Friedman as the loving, if curmudgeonly, Tom, and Lilli Cooper as the mercurial Ray. Eboni Booth’s attempts at fleshing out the somewhat limited character Joey are laudable. However, it is deeply frustrating to see both sisters experience their greatest dramatic moments of transparency and openness when they are mooning over unimpressive men whose mediocre talents made lasting impact on the girls. In one oddly out of place subplot, Joey finds herself alone at night with a washed up poet, Ted Driscoll (Greg Keller), who also just so happens to be the very writer who visited her high school classroom many years prior and whose poems Joey can still recite by heart. Ray has a parallel experience with counselor Carver, remembering one seventh-grade dance where he played a song. Anne Kauffman’s direction of both moments is admirably patient—the whole show lingers poetically—but positions both Ray and Joey as fan girls, fawning over the rock stars from their memories of long ago, and ultimately feels unbelievable.

The show presents a genuinely atmospheric experience, with Lauren Helpern’s clever multi-level set design evoking a wooded cabin enhanced by Leah Gelpe’s nature-sounds-heady sound design. Crickets chirp and winds blow, effectively creating the nighttime world. Genuinely surprising and impressively realistic components of Helpern’s set allow for multiple locations to arise from the unchanging space. In addition, clever lighting by design team Isabella Byrd and Matt Frey—including an iconic cell phone in the dark, masterful late-night car beams, and the eerie glow of an abandoned reservoir—round out the world of Sundown, Yellow Moon with satisfying wholeness. Piercing through the darkness like stars are a few songs written by the indie-folk duo The Bengsons, who have built a cult following based on their lilting harmonies and the lyrical, funny-sad images in their songs. The music in Sundown, Yellow Moon—what there is of it—bears The Bengsons’ signature honeyed sound. However, it is unclear what purpose the music serves in the show; the handful of songs provide all-too-fleeting glimpses into more dynamic aspects of these characters.

Sundown, Yellow Moon is the product of a co-production between the offbeat theater incubator Ars Nova and WP Theater (formerly Women's Project), which empowers female-identifying artists to challenge the kind of plays women write. Suspended like the setting sun, plunging the characters into crepuscular twilight doubt, the play is at its strongest when it celebrates little life moments. Bonds, director Kauffman, and The Bengsons should be applauded for their willingness to experiment with new ways to structure a musical, but are encouraged to continue playing with their formula. To quote the Bob Dylan lyrics from which it takes its title, look it up if you’ve got the time.