Adapted by Naomi Iizuka; Based on a story by Haruki Murakami;
Directed by Rachel Dickstein and Ripe Time
Produced by Ripe Time
Part of BAM's 2017 Next Wave Festival 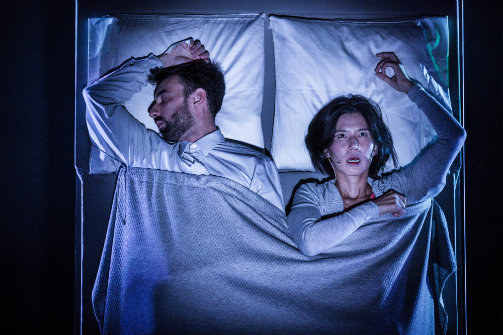 BOTTOM LINE: This unusual adaptation of a Haruki Murakami short story captures the visceral feeling of insomnia as one woman's inability to sleep leads to her unraveling.

It seems ironic, or perhaps fitting, that after rushing around on a particularly sleep-deprived day, I headed over to BAM for a show centered around a woman who loses the ability to fall asleep. My desire for a peaceful night's sleep began to merge with that of the central character. Known only as Woman (Jiehae Park), Sleep's protagonist has a fascination with her insomnia that eventually turns into a desire to return to the normal world of those who slumber each night.

Woman lives a dull, routine-filled life in a tidy condo with her successful dentist husband (played with irony by Brad Culver). She looks at this beaming man and his endless circle of repeated jokes and wonders why on earth she married him. Every morning she gets up with her husband, makes breakfast, and sends him and their child (Takemi Kitamura) off to work and school. Despite a facade of normalcy, her insomnia has returned, an ailment that has not befallen her since her freer days as a college student. In Susan Zeeman Rogers' set, the boundaries of her tidy domestic life are emphasized by a metal box used for the beginning of the play. As Woman falls deeper and deeper into a world where dreams and delusions merge with reality, the box falls apart, showing the structure of the life she once knew is gone.

Woman is at first gleeful with her hidden secret, saying that she has become like a machine, performing the perfunctory duties as a wife and mother without any thought or involvement. Days begin to merge without sleep-filled nights to break them up; conversations and actions are repeated as each day slips into the next. Meanwhile, the nights becomes a time of freedom. Woman stays up late reading Anna Karenina while drinking brandy and eating chocolate, all things her dull husband forbids her from doing. Soon, Anna from the novel materializes and becomes part of Woman's surreal new life.

As Woman slips further and further away from reality her insomnia creates a world of darkness and fear, rather than one of freedom from drudgery. This break from reality is emphasized by a second Woman character mimicking her behind a glass backdrop, along with live musicians who perform a score evocative of the changing emotional landscape. If there isn't much plot here (aside from Woman's descent into madness), the same might be said for Murakami's original vision. Rather, we see Woman rebel against her domestic routine by breaking the one part of that routine that she has control over.

(Sleep played at BAM's Fishman Space, 321 Ashland Place, through December 2, 2017. The running time was 70 minutes with no intermission. Tickets were $25 and were available at bam.org.)