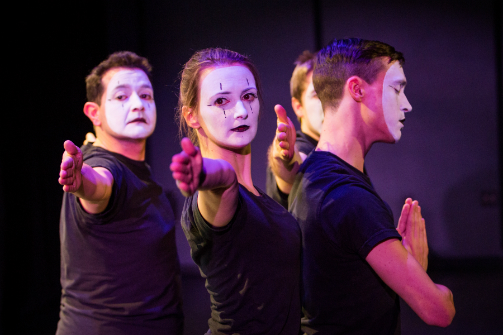 BOTTOM LINE: A feast of physical storytelling with an eclectic range from comedy to poetry in motion to film noir.

The movers and shakers of Broken Box Mime Theater (BKBX) makes one reminisce the golden age of silent films, when "just one look" spoke more clearly than a thousand words. With radical minimalism, the BKBX ensemble creates a world of intricate simplicity and heightened expressiveness: the lack of dialogue never hinders, but rather brings more clarity to their storytelling. In 90 minutes (of pure mastery), BKBX puts on a feast of a show. Singing praises to them with flowery words would almost be insulting, for they accomplish much while uttering none.

Bookending the evening is "Plainview Community Players," a two-part farce mashing up Noises Off and Waiting for Guffman, where the fictitious ensemble scrambles to stage Romeo and Juliet while encountering endless problems. Hilarity ensues. "Recollect," with a rather different tone, tells a heart-wrenching story of loss: a nurse (Nick Abeel) who lost his partner in a car crash forms a connection with the old woman he cares for, who similarly latches onto a fading memory. "Automatic" is the ritual-like disassembling and reassembling of rifles: you will surely get chills watching the ensemble, in unison and blindfolded, engage with such precision and beauty in an act that is so closely connected to violence. "The Whole Shebang" is a highlight of the evening, a gorgeously rendered piece that tells the history of everything in the funniest and most poetic way possible. Duane Cooper, Becky Baumwoll, and Blake Habermann perform, using every last of their fingers to draw the shift from the big bang to the evolution of humans, from the scale of the universe to the interaction of a sperm and an egg. Between the trio, time and space become like clay, obedient and malleable.

After the intermission is "The Good Detective," in which Cooper plays an investigator who discovers foul play at the crime scene of a double homicide. The detective's thought processes are played out with perfect control, and a chase through dark alleys follows the big reveal of the villain, leading to a final showdown between the good and the bad. The style here emulates some of the most iconic film noir classics. "The Ruckus and the Well" is an allegory of self-acceptance in which a fairy-tale princess learns to confront her own darkness in order to be fully alive. In "Communion," an observation and commentary on what different groups find sacred, the ensemble explores the concept of shared experiences, from religious Communion, to yoga, to a rock concert. Finally, "Heartland" is a tender yet honest portrayal of a father-daughter relationship with two drastically different ideals and lifestyles. The piece blends reality and imagination, and brings into focus the conversations we wish we could have.

BKBX's versatile collection of short acts is an impressive showcase of the company's eclectic styles. It's a true delight to witness the sparks of their creativity that come to fruition as the result of true collaboration.