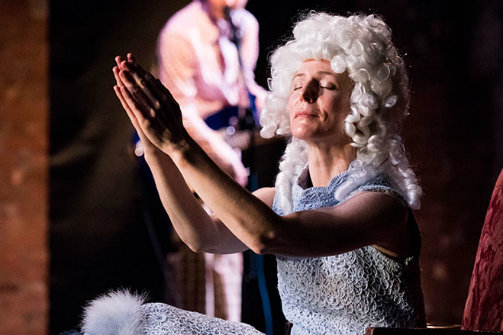 BOTTOM LINE: Combining dance, drama and video art, the new show by Big Dance Theater reads a 17th-century diary, some elements of which are scarily recognizable in the modern world.

Englishman Samuel Pepys was a successful administrator in the navy and a member of Parliament, but is chiefly known for his diary, which he kept from 1660 until 1669. Writing in it nearly every day, Pepys doesn’t hold back, talking mostly about his everyday life. I wonder if his choice of subject matter and tone would have changed if he had anticipated a public reading from the stage of Brooklyn Academy of Music three centuries later. Would he feel at home in a modern culture heavily influenced by social media? Fittingly, Big Dance Theater calls him a predecessor of today's Instagrammers in their new multimedia show, 17c.

“Up, I bless God being now in pretty good condition, but cannot come to make natural stools yet; and going to enjoy my wife this morning, I had a very great pain in the end of my yard when my yard was stiff…” This excerpt form Pepys’ diary, voiced by Cynthia Hopkins in a curly white wig and shiny blue pants, sparks a little stand-up comedy routine at the beginning of the show. Microphone in one hand and book in the other, Hopkins encourages audience members to shout out synonyms for penis. But even when pretending to be vulgar, 17c never misses the mark and stays witty, charming and intelligent.

Three performers—Cynthia Hopkins, Aaron Mattocks, and Paul Lazar (also the co-director)—alternate playing the author. Leafing through the pages of his busy life, they evoke his obsession with clothing, theatre, dance lessons, bowel movements, and his mistresses: the man talks about himself so much, they need three actors to deliver the lines. Jokes aside, the multiple actors represent Sam’s “split” personality—split not clinically, but morally. On one hand, he strives to become a better man; on the other, he cheats on and abuses his wife Elisabeth.

Elizabeth DeMent portrays the young Mrs. Pepys, fourteen years old at the time of her marriage. She is mostly voiceless, expressing herself through beautiful dance numbers choreographed by Annie-B Parson, who conceived the show and also co-directs. Lazar and Parson are inventive in how they represent the speech of an oppressed woman. In one scene, Elisabeth’s lines pop on the screen as title cards. In another she speaks in a different person’s voice as if she is possessed and doomed to repeat what men say. She is given a lovely, poetic monologue towards the end of the piece, a fantasy of how her diary would read, if her husband didn’t destroy it.

Parson and Lazar introduce other female voices in 17c, counterbalancing the misogyny and egocentrism of the main character. A play read within the play, The Convent of Pleasure, tells the story of a community of women who choose to live without men (this is a real play, written by Margaret Cavendish in 1668). It’s a pity that Sam asks Bess to skip through most of it: he doesn’t enjoy it, annoyed at the two female characters together, and only accepts the play when learning that one female character is actually a man in drag. (Interesting fact: the ending was written by Cavendish's husband—another woman silenced.) Two feminist vloggers, commenting on the diary from time to time, represent the liberated women of modernity, but even they are robbed of freedom of speech, once their platform is (literally) taken from beneath their feet.

The seamless blend of dance, text, music and video is a signature style of Big Dance Theater. Combining different media seems appropriate for this show, which interweaves the seventeenth and twenty-first centuries. With props and costumes visible in the wings, actors quickly transform into different characters. The costumes, by Oana Botez, are impeccable and full of irony; she uses recognizable historical wardrobe elements as a starting point, and makes them into futuristic sci-fi garments with the addition of modern day clothing. Playful and inventive, Botez's designs are in perfect unison with the directors’ vision.

However, what struck me the most was not the pink sweatshirt with kittens, or the shiny, layered skirts. It was the plain sweater and pants, worn by Paul Lazar playing Pepys, that I found exceptionally on point. Sitting in a recliner by an electric fireplace, Lazar delivers the longest monologue in the play—a series of diary entries about sleeping with the housemaid. The casual way in which Pepys writes about abusing his power is perfectly mismatched by the cozy setting. With an anachronistic line or two added to the original text of the diary, we may forget which century we are in now.

(17c played at BAM's Harvey Theater, 651 Fulton Street, Brooklyn, through November 18, 2017. The running time was 1 hour and 10 minutes with no intermission. More information is available at bam.org.)